The initial estimated 2P (proven and probable) reserves stand at 24 million barrels of oil, at a depth of 800 metres. Lots of upside for the reserve estimate is expected to materialise as more wells are drilled and at greater depths.

In a neigbouring concession, ExxonMobil is delivering about 200,000 barrels a day in its current second year of production.

GSS Energy plans, after the first well is drilled, to get its contractor to deploy its rig to a second site, so by the end of this year, two oil wells could be producing oil.

This would mark the start of a possibly lucrative business for GSS Energy: Cost of production is estimated at US$12-14 a barrel while the market price of oil stands at around US$50 a barrel.

Under an agreement with Indonesia's state-owned oil company Pertamina, revenue from the guaranteed oil sale to Pertamina will first be used to pay for the capex and the cost of production before profits are split between the JV partners.

These "recoverable expenses" are currently parked in GSS Energy's balance sheet (under "Other receivables and deposits") and does not affect its profit & loss statement. 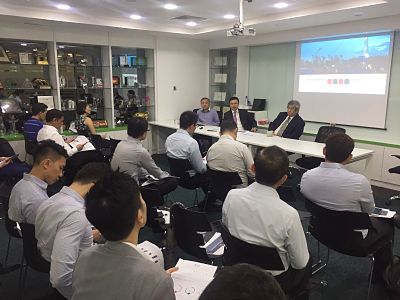 @ 2QFY17 briefing. Photo by Colin LumThe venture has a long time to run: In Nov 2016, Pertamina awarded a 15-year contract to the JV comprising PT Sarana Pembangunan Jawa Tengah and a subsidiary of GSS Energy, respectively.

The former  is a commercial vehicle wholly-owned by the provincial government of Central Java which holds stakes in various large-scale infrastructure projects in Indonesia.

GSS Energy has an 89% economic interest in the JV.

With an assumption that they deliver $10m core NPAT for PE business in FY17, that would put the market cap at $100m, implying a 33.3% upside from present price of $0.152 to $0.20. the growth trajectory had been consistent and strong throughout the quarters since the management turned around the business. with a base assumption of just 10% growth for FY18 and discount to peers at 10x PE, fair value for PE business alone is easily $0.22-23/share.

that being said, you are not even ascribing premium value to the quality of earnings that the PE business is delivering. with the group' s total equity of just under $40m and assuming $10m NPAT for PE business, it translates to ROE of about 25% for FY17. ROE for FY16 was at approximately 21% ($8m NPAT over total equity of $37.8m).

if you dive into an analysis of the peers, do not think there are many, if any that I might have missed out, that might have comparable ROE and quality of earnings. last peer that I can possibly think of would be Innovalues with ROE in excess of 30%.
Quote
Refresh comments list
NextInsight.net

We have 515 guests and no members online