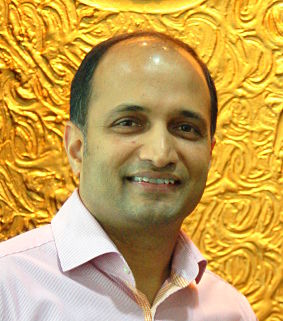 Sudeep Nair, CEO.
NextInsight file photo The positive 1Q2017 results were a catalyst for the stock price as were the CEO's stock purchases.

This table details his purchases after the release of Food Empire's 3Q16, 4Q16 and 1Q17 results:

Food Empire's 1Q2017 reflected relative stability in its markets, especially in its No.1 market, Russia, where the ruble has strengthened and looked stable.

The ruble-USD exchange rate has been mainly below 60 to 1 compared to mainly above 70 to 1 in 1Q2016. The other two markets that did well are as follows:

Food Empire is working on improving sales in Myanmar and China, and turning them into its next growth catalysts.

In Myanmar, it recently introduced BOLT, a chocolate-flavoured 3-in-1 malt drink.

In China, under a new management, Food Empire is driving sales of its coffee products online in addition to the conventional channels (supermarkets and convenience stores).

In South Korea, 20%-associate Caffe Bene is the main contributor to the "share of loss of associates" of US$734,000 in 1Q2017. Caffe Bene typically experiences relatively low sales in winter and higher sales in summer.

We have 1004 guests and no members online