A Beneficiary of China Mega Investments into Malacca
In November 2016, the China and Malaysia governments commenced construction of a new S$14 billion off-shore trading port in Malacca. Called the Melaka Gateway, the trading port is part of a slew of trading agreements including a S$17.8 billion East Coast railway line. The new trading port will be a joint venture by state-funded companies Malaysia’s KAJ Developments and China’s PowerChina International.

Construction of Melaka Gateway will involve the land reclamation of three off-shore islands off the Malaysia’s coast and is scheduled to be completed by 2025. According to projections, 100,000 shipping vessels will dock at the port, without having to stop by the monopoly route held by Singapore over past few centuries.

Hatten Land, being the largest property developer in Malacca will stand to benefit in many areas. Firstly, Melaka Gateway is of close proximity to Hatten’s flagship project, Harbour City due for completion in 2020. Secondly, Hatten Land has on 10 Feb’17 announced a non-binding MOU to exercise a call option granted to the Company to acquire:

i. 2.05 acres leasehold land slated to be developed into an integrated mixed development that will comprise a hotel block and a serviced apartment block (“Thea Wellness Project”);

ii. 9.34 acres leasehold land slated to be developed into an integrated mixed development that will comprise a shopping mall, cineplex, convention hall and auditorium, meeting rooms, a hotel block and a serviced apartment block (“MICC Project”); 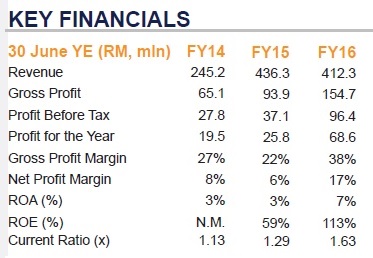 iv. 8.86 acres of leasehold land slated to be developed into an integrated mixed development that will comprise a mix of retail, residential and hospitality units (the “Movie-Town Project”);

v. The entire issued and paid up share capital of Admiral Merger Sdn. Bhd. Company (“AMSB”). AMSB owns the development rights to develop the 25.55 acres freehold land slated to be developed across three phases into an integrated mixed development that will comprise retail, commercial (offices), residential, and hospitality units and a hospital (the “Cyberjaya Project”).

The above suggests a potential pipeline of cheap assets is ready and available to be injected into Hatten Land over the next few years.

We have 654 guests and no members online