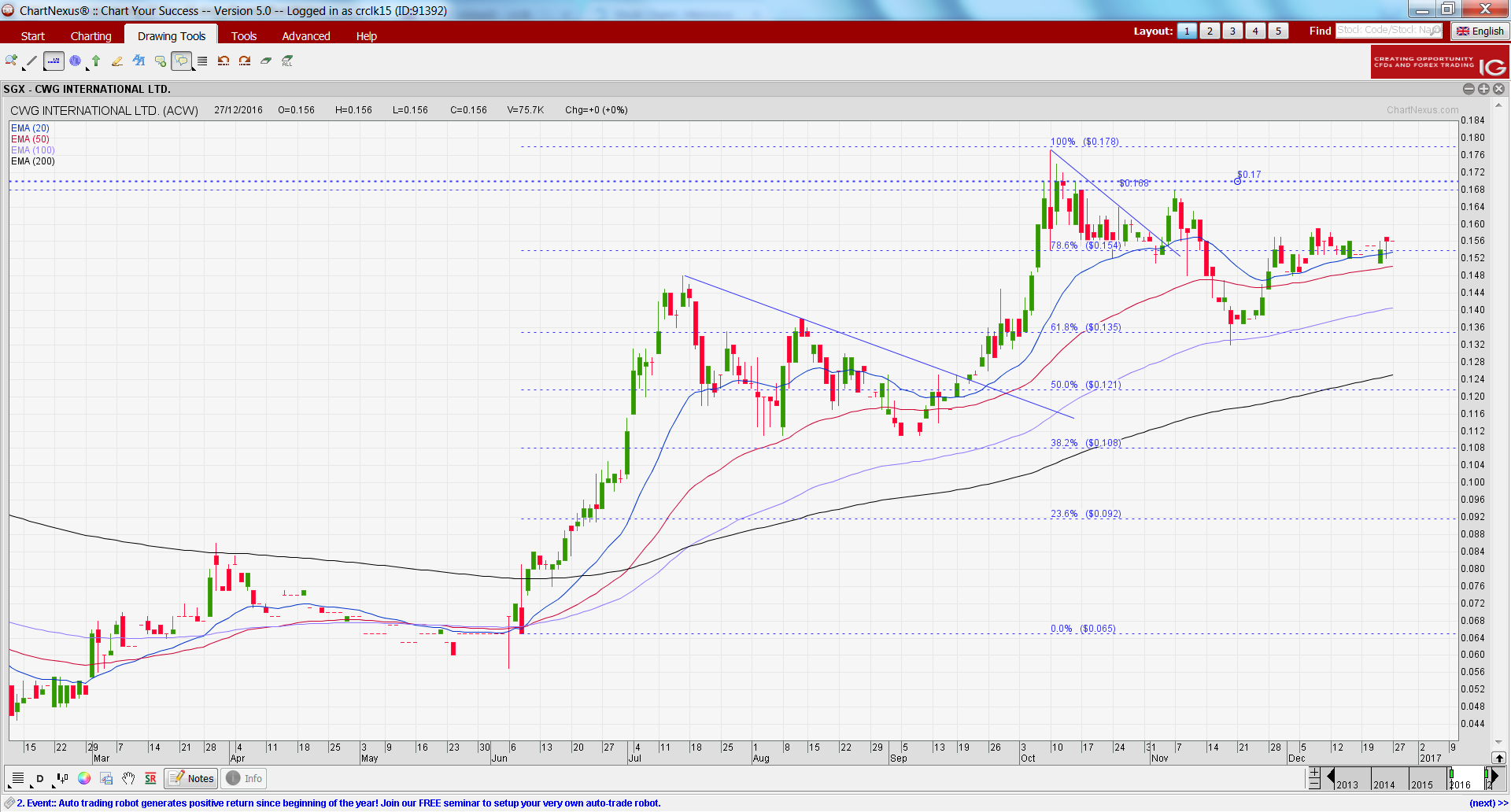 Amid positively placed directional indicators, ADX is around 25, indicative of a trend. RSI closed at 56. Although the usual benchmark for RSI’s overbought level is around 70, based on historical records, its RSI can reach 90 before profit-taking occurs. All in, the chart looks positive. A sustained break below $0.135 negates the bullish tone of the chart.

If this is true, 4QFY16F will be a very strong quarter. However, this is contingent on the scheduled delivery of its projects.

Shareholders approved CWG’s share buyback mandate on 7 Nov 2016. Up to now, there has been no share purchase by the company. Should this commence, there should be another layer of support for the company’s share price.

Management has been active in doing buybacks themselves. Although the purchased quantities do not seem significant, there are two noteworthy points.

a) CWG’s average 30D volume amounted to only 349K shares. Thus, my guess is that even if management wants to buy more, it is easy for them to do so.

b) Mr Qian Jianrong, Executive Chairman and CEO of CWG already holds around 74.9% of the shares.

CWG announced the adoption of a new dividend policy, with a base payout of S$0.01/share annually. At the 27 Dec closing price of $0.156, this represents a potential dividend yield of around 6.4%.

In a 22 Dec 2016 article, Bloomberg reported that China’s President Xi reiterated the need to “deflate property bubbles and regulate the market for rental housing to better meet people’s residential needs”. Thus, there are potential headwinds which readers have to be aware of.

However, readers should be aware that the above write-up is a technical write-up based mainly on chart observations, coupled with a summary of certain pertinent points.

There are definitely potential risks such as headwinds in China’s property sector.

Readers can refer to the following links / reports to know more about CWG:

a) Chiwayland – Aiming to be an international property developer; trading at 0.4x P/BV! (14 Sep 16). Chiwayland was trading at $0.120 at the point of my write-up. Please click HERE.

b) Chiwayland – Huge discount and hidden value in presales (11 Oct 16). UOB Kayhian research postulates in an unrated report that if Chiwayland’s estimates are used, its fair value may range between $0.370-0.570. (It is noteworthy that based on 3QFY16 results, Chiwayland’s NAV / share is around $0.290.)

We have 1080 guests and no members online