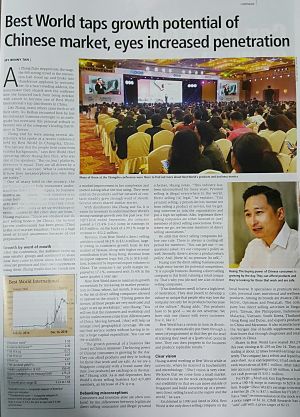 Best World aims to be among the top 20 direct-selling companies in China in 3-5 years. To achieve this, Maybank KE estimates that China would have to contribute RMB2 billion in revenue. China contributed about RMB210 million in 9M2016.Best World International is at an inflexion point, as it has just been awarded a licence to conduct direct selling in China. This comes on the heels of strong growth in Taiwan, its No.1 market.

The company's moves to scale up in China were featured in the Dec 19 edition of The Edge Singapore. Being a direct-seller, unlike conventional retail plays, Best World is not hampered by rental and staff costs as it expands.

In other words, it does not own retail outlets and its distributors are not employed as staff but are, instead, incentivised by sales commissions.

Here, we distill key figures and quotes from the report:

Best World traded at $1.26 yesterday for a trailing PE of 13 and a market cap of S$348 million. The 2016 PE is expected to end lower as 4Q is usually the strongest quarter for Best World.

→ The makeup of Chinese distributors:

We have 1628 guests and no members online