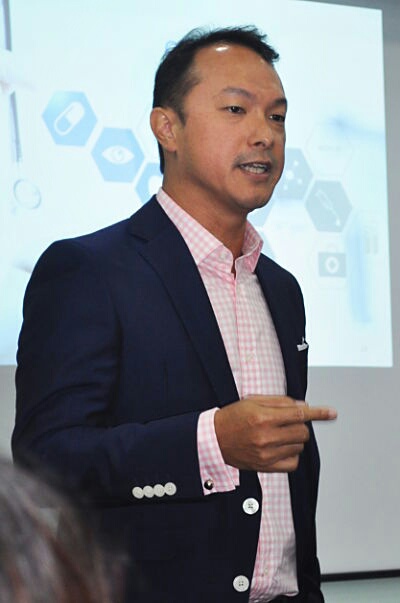 Dr Beng Teck Liang, CEO of Singapore Medical Group. Nextinsight file photoSMG was incorporated in 2005 and listed on the SGX since 2009. It is a private specialist healthcare provider with a network of 30 specialties. The Group currently has a total of 23 clinics strategically located in Paragon, Mount Elizabeth Novena Specialist Centre, Parkway East Medical Centre, Raffles Place, Connexion and Gleneagles Medical Centre with a growing network of SMG Associates clinics across the island.

SMG announced on 11 Oct 2016 that it has acquired Astra Women Specialists on 11 Oct 2016 with a minimum profit guarantee of S$4.6m per year for 5 years. The Astra Women’s Specialist group of clinics comprises of six obstetrics and gynaecology (“O&G”) clinics along with five reputable doctors. This is beneficial to SMG on a couple of fronts.

Firstly, barring unforeseen circumstances, it provides clear earnings visibility over the next few years. Secondly, with this acquisition, SMG will have eight O&G doctors, making its O&G practice to be one of the largest in the private sector. According to Nextinsight, SMG will overtake Singapore O&G in this O&G field.

3. Existing business to continue to grow

Based on Figure 1 below, SMG’s health business segment has grown by 30% y/y in FY14 and 13% y/y in FY15. This was partially attributed to an increase in patient load and addition of 3-6 doctors per year. Based on their 1HFY16 results, SMG said that it would continue to focus on growing its existing businesses by recruiting new medical specialists and leveraging on its networks to promote cross-selling activities. Based on Bloomberg, notwithstanding the meteoric rally in SMG’s share price, it still trades at a reasonable 22x FY17F PE vs 24x and 30x for Singapore O & G and Raffles Medical respectively.

RHB is the only brokerage house which covers SMG with a rated report. In RHB's report dated 12 Oct 2016, RHB estimates SMG will issue a total of 151m new shares to fund the acquistion of Astra Women Specialists. As a result, their PE calculation is based on an enlarged outstanding shares of 461m.

However, on 6 Dec 2016, SMG announced that the source of funds for payment of the cash consideration for Astra Women Specialists will be financed by internal resources and bank facilities, instead of equity. Thus, SMG's share base should be significantly smaller and PE is likely to be lower than 22x, even taking into account of interest expense on the debt raised.

Mr Tony Tan is the Non-Executive Chairman of SMG. He was the founder and Managing Director of Parkway Holdings Limited, Singapore until 2000 and Deputy Chairman until his retirement in 2005. During his service, he initiated acquisitions and developments by Parkway Holdings Limited both in Singapore and overseas to build its healthcare franchise from initially a property developer to one of the largest private healthcare providers in Asia.

It is noteworthy that since the new management who took over in Dec 2013, SMG’s results had shown a marked improvement by reversing from losses amounting S$6.3m in FY13 to profits in FY14 and FY15 of S$0.5m and S$0.2m respectively.

SMG is gaining market and investor awareness. During its 1HFY16 results briefing in Aug 2016, it is packed with investors, funds and analysts. There is only one brokerage house (RHB) which is covering SMG with a target price of $0.630. If SMG continues to execute on its plans and delivers on the results, it is likely that other analysts may start to take a closer look in it.

Here are some of the risks which readers should be aware. This is not an exhaustive list.

1. Stock has tripled in value

It is a fact that SMG has tripled in value in the past five months and may be prone to profit taking. Furthermore, there may be higher expectations priced into SMG now than before. However, as mentioned above, at the current price, SMG still trades at decent valuations of  22x FY17F PE vs 24x and 30x for Singapore O & G and Raffles Medical respectively.

Acquisitions carry risk and they may not integrate well with SMG. In addition, it is likely that funding for acquisitions is likely to be financed by equity to some extent. If the acquisitions do not result in the intended benefits, the dilution caused by equity financing may be detrimental to shareholders.

Although Singapore’s healthcare sector is growing due to an increasing aging population, coupled with the expected population growth, the private healthcare industry remains challenging with intense domestic and regional competition. For example, if SMG fails to retain existing doctors and attract new ones, there is likely to be an adverse impact on SMG.

Based on Chart 1 below, since 12 Oct 2016, SMG has been trading between $0.410 – 0.500 and is testing the lower end of the range. 21D exponential moving average (“EMA”) is declining but the other longer term EMAs are either flat or rising. Although the directional indicators are negatively placed, ADX is trading around 17 which is indicative that a trend does not exist. Although share price has declined almost 17% from an intraday high of $0.500 on 13 Oct 2016, OBV continues to be at an elevated level which is a positive sign. In addition, the recent share price decline is accompanied with a lower than average volume. In other words, selling pressure seems not excessively strong.

Notwithstanding the above, it is noteworthy that a sustained break below $0.410 with volume expansion is likely to see SMG head towards $0.360 or even $0.320. Conversely, a sustained break above $0.500 with volume expansion points to an eventual measured technical target of around $0.590. Given the current chart information, the odds of SMG breaking below $0.400 - 0.410 are not high at the moment. SMG seems to be a turnaround play with an interesting story, entrenched in a defensive sector. However, readers should note the above risks, such as share price has tripled in value in the past five months and execution risks.

We have 145 guests and no members online