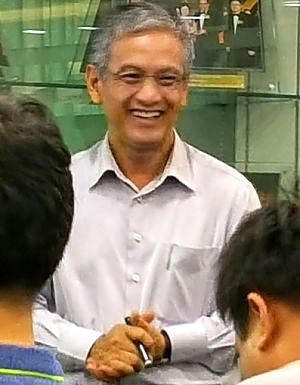 AEM Holdings CEO Charles Cher: He had retired as CEO of ASTI Holdings when he was asked to helm AEM in 2014.
Photo by Leong Chan TeikIn essence, all semiconductor chips are tested electrically before they are assembled into electronic devices such as computers, mobile phones and refrigerators.
Instead of testing one chip at a time with a single equipment, AEM's new platform has 30 testers.  Instead of being tested in three stages -- burn-in test, class test, system level test -- by three different types of equipment, the chips can be tested on one platform. 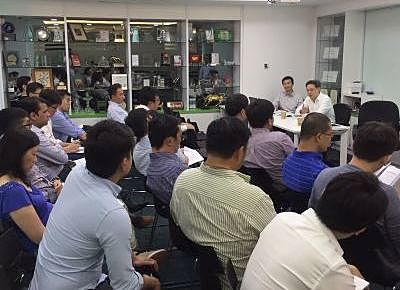 The upshot of all this is, testing cost becomes a fraction of what it is today, said Mr Cher.

AEM, which has discontinued the sale of its previous generation of testers, started delivering the new ones to Intel in 2015.

"We are trailblazing with our customer," said Mr Loke Wai San, the non-executive chairman of AEM and founder and MD of his own private equity firm, Novo Tellus Capital.

(Mr Loke is a Director of New Earth Group which manages Novo Tellus PE Fund 1, L.P., the sole member of Orion Phoenix which is the No.1 shareholder of AEM with a 27.3% stake.)

Each of the AEM machines - technical name: "high-density test handlers" -- sells for several million dollars.  The one-off sale of capital equipment aside, in the years ahead there will be recurring income from selling consumables used with these machines.

AEM owns the intellectual property rights, and has the right to sell such machines to other customers. But AEM is too busy building for Intel currently.

AEM is expanding its production capacity and increasing engineer headcount, which currently allow it to build "several machines per quarter".

Over the next 8-10 years, the new AEM machines potentially could replace the existing ones -- AEM's and competitors' -- in use globally.

AEM has sold about 700 tester machines over the past 10 years, with about 400 still in use.

We have 459 guests and no members online