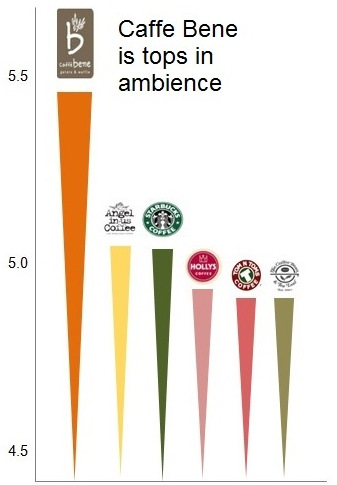 Source : Korea Consumer Agency, KAIST Center for Fair Trade and Consumer Protection (2011).What's enticing (to Food Empire and any potential partner) is clearly the scale of Caffe Bene's business -- 1,000 or stores worldwide, with about 850 in South Korea.

In fact, it has a wider presence than Starbucks (600+ stores) and its standing with consumers is also ahead at No.1. (Source)

In a country where coffee culture became extensive only in the past decade or so, Caffe Bene had quickly won market share, which stood at 18%, as at end-2014.

With its extensive network of contacts in Singapore and internationally, it would not surprise if Food Empire (and the Salim Group) attract other F&B companies to join in the Caffe Bene journey.

In particular, Singapore companies without a presence yet in Korea could seek to get in this new door as partners with Food Empire, tapping into the latter's new-found Korean connections.

They may have products that can find space on the merchandise shelves of Caffe Bene or in its food menu. Or they can get Caffe Bene to supply to their (new or existing) F&B ventures in Korea and the region.

There are assets of Caffe Bene that third parties may partner it for. A factory, which opened in 2014, for roasting coffee beans has spare capacity to roast for others. And the same factory can produce desserts and gelatos, as it already does for Caffe Bene.

Certainly, Food Empire itself has a few products of its own (such as potato chips and tea bags) that it can consider adding to the menu.

Adding to the list of possible in-store merchandise: coffee-making machines (for home use) and coffee capsules. These are being produced by a new Food Empire JV with an Italian partner.

We have 1082 guests and no members online