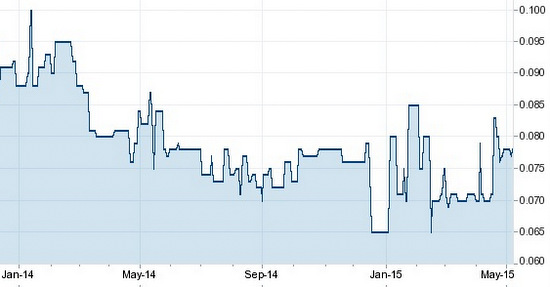 Shanghai Turbo, at 7.8 cents share price, has a market cap of only S$21 m. Chart: Yahoo!
Excerpts from analyst's report

Shanghai Turbo share price trades at only 0.3x PBR and 3x historical PER. We consider its share price undemanding given its good track record on profitability since 2008 with net cash positions, and consistent dividend pay-out since 2010.

Shanghai Turbo was founded in 1997, a unique player in China capable of producing complete vane products for different type of turbine generators. Based in Changzhou City, Jiangsu, China, its core business is in precision engineering that specializes in the production of precision vane products, namely stationary vanes, moving vanes and nozzles. The vane products mostly for thermal power plants, gas and steam power projects, and a small number for nuclear power plants.

Listed on mainboard of SGX-ST since January 2006, Shanghai Turbo is a promising player in the growing sector of clean energy. The group utilizes advanced manufacturing technology as its competitive edge by using the latest precision engineering machinery from Korea, Japan, Switzerland and Germany.

2014        Obtain ISO14001 and OSHAS18001 certifications as well as 2 patents for milling processes adding a total of 14 patents to date. The group capabilities increased to be able to produce individual vane product pieces for gas and steam combined-cycle turbine power generators with generating capacity of up to 1,000 megawatts.

2015        Strengthening its corporate governance, the board separated the roles of Chairman and CEO to ensure an appropriate balance of power, increased accountability and greater capacity for independent decision making by the board.

We have 516 guests and no members online