TERRAMIN AUSTRALIA: A zinc play for a future with rising zinc prices 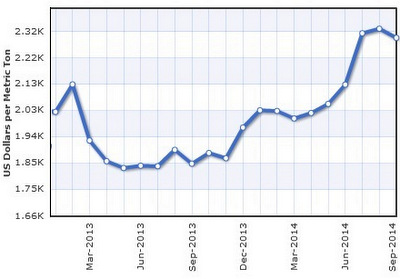 Zinc price is on an uptrend this year with more upside in the years ahead owing to a shortage of supply. Zinc is used, among others, as a protective coating for steel in construction, cars and home appliances.
Chart: http://www.indexmundi.comUnlike many a commodity such as copper and gold, zinc has risen steadily in price throughout this year.

Even more startling, industry experts project that zinc will sell for substantially more in the next few years because of a shortage of supply.

This arises from the scheduled closures of some major zinc mines around the world as their deposits have been substantially depleted.

That has gotten the investors and management of Terramin Australia all excited, all the more so because the Australia-listed company is on the verge of starting work on a large zinc mine in Algeria.

To tell the story, the management was on a non-deal roadshow in Singapore last week. 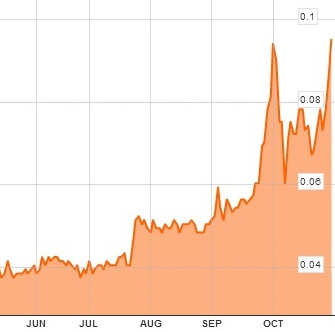 Terramin share price jumped 30% last week. At 9.5 AUD cents, the company has a market cap of AUD125 m.
Chart: BloombergThe story caught on, contributing to a 30% rise in the stock price from 7.3 AUD cents to 9.5 AUD cents last week.

Terramin's management indicated that the company is just a short few months away from the all-important and final hurdle of securing the go-ahead from the Algerian government, which holds a 35% in the joint venture through two companies.

In an interview with NextInsight, Terramin's non-executive chairman, Michael Kennedy, recounted that in 2006, Terramin won an international tender put up by the Algerian government.

The project was to mine an area which the government had done exploratory drilling in, and it would be Terramin's first zinc mining project outside of Australia.

Since then, Terramin has sunk about A$50 million largely to drill to ascertain better the scale and location of the zinc deposits in what has come to be known as the Tala Hamza mine.

A JORC report estimated that the mine has about 3.9 milion tonnes of zinc (indicated resource), which ranks it among the world's 10 largest zinc deposits. 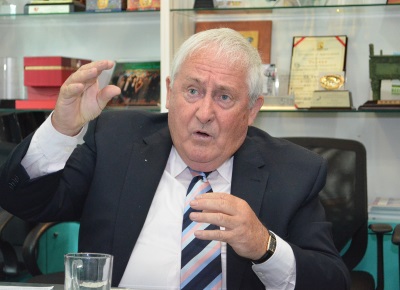 Michael Kennedy, non-executive chairman of Terramin, is a well-known veteran in the Australian zinc industry. Photo by Sim KihThis is also the biggest discovery in the Algerian zinc industry (which has been under-explored for the past few decades, unlike its oil & gas industry).

Terramin has done studies on how to mine the zinc and process it -- as well as the enviromental impact, among others. It has also examined shipping options for the zinc concentrate to reach some of the world's largest smelters in Europe.

Shipping would take a mere two days or so, instead of tens of days that it would take from other major zinc mines in the world.

After consultations with its Algerian partner, Terramin has tabled a Definitive Feasibility Study for the project which will have a 20-year mine life.

Development and construction will take about two years before underground extraction of the zinc ore is possible. The top of the ore body is about 280 metres below ground. 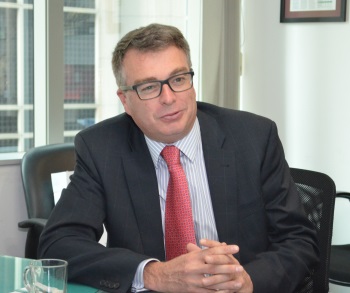 Martin Janes, CEO of Terramin.
Photo by Sim Kih.Terramin CEO Martin Janes highlighted "an important and unusual aspect" -- the existing extensive infrastructure around the project area. This is unlike the remote and difficult locations of many major mine projects around the world.

The Tala Hamza mine is, for example, just 15 km from a deep-sea port of Algeria, 10 km from an international airport and there is grid power running along the boundary.

Another positive: Electricity cost is low, as Algeria is energy-rich: It is the No.2 exporter of natural gas to Europe, after Russia. 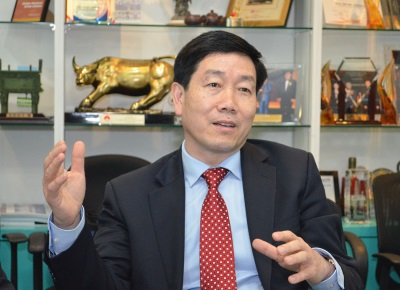 That's why "it will be a 'cheap' mine, much cheaper than others," said Mr Kennedy.

Asked for the capex figures, he said they had not been disclosed publicly and are subject to finalisation with the Algerian government.

A large part of the funding will come from development banks in Algeria at favourable interest rates.

We have 856 guests and no members online