This article was recently posted on www.sharesinv.com and is republished with permission.

A long-term investor tends to focus on annual performance, rather than quarterly, because the latter may be subject to one-off fluctuations. But quarterly results may give us a better sense of immediate challenges a firm faces and thus, allow us to react quicker.

From a yearly perspective, Super has posted attractive top and bottom line growth backed by rising margins. Over the past five years, revenue has increased at a compounded annual growth rate (CAGR) of 17.1 percent to hit $557 million in FY13.

Neither of these warrant the fall in share price. 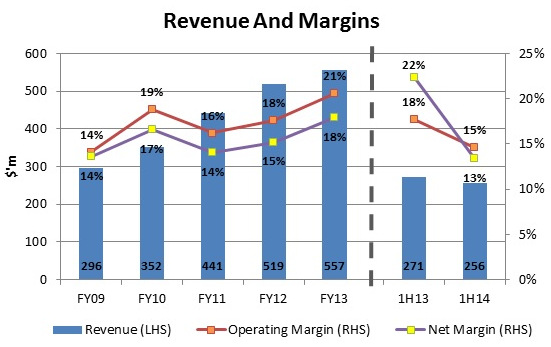 However, Super’s recent performance may shed some light. In May, the firm released its 1Q14 financial results with a 5.9 percent and 19.4 percent dip in revenue and net profit to $124.6 million and $22.1 million, respectively.

In August, Super posted its 1H14 results, which continued the trend from 1Q14. Turnover fell 5.3 percent to $256.3 million while both operating and net margins have been trimmed from 17.7 percent and 22.3 percent a year earlier to 14.6 percent and 13.4 percent, respectively.

Even if a $17.1 million one-off gain recorded in 2Q13 was excluded from the calculation, Super’s 1H14 net margin would still be down 2.5 percentage points. 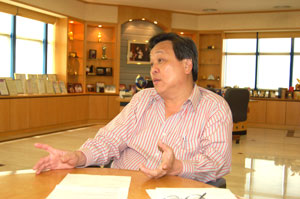 The dip in the latest half year is due to poorer results from its BC unit, dragged down by lower contribution from its Southeast Asia markets, partially offset by a rise in revenue from its FI division.

This means that the revenue mix comprised a larger portion of FI than in 1H13.

The Thai Effect; Will It Prolong?

Thailand accounts for approximately 30 percent of BC’s sales. The recent civil crisis in the country has led the firm’s distributors and wholesalers to scale back on inventory replenishment and expansion due to weaker consumption.

The nation has been undergoing political unrest since 2004 and yet the nation’s gross domestic product (GDP) has more than doubled from US$161.3 billion in 2004 to US$387.3 billion in 2013. While I’m unaware of the drivers behind this growth, on the surface, it appears that the country is able to improve its GDP through tough times.

Despite the less-than-positive outlook in Thailand, investors may wish to know that Super is exploring other forms of growth. Over the past three and a half years, Super has spent $212.6 million in capital expenditure (capex).

That includes the opening of new production facilities used for botanical herbal extraction and production of liquid glucose syrup solids and nutritional oil powders. These facilities are slated to commence operations between 2H14 and 2015.

Whether the slump that Super is presently experiencing in Thailand and margin contraction is a temporary or prolonged setback, your guess is as good as mine.

However, the products carried by the company have been in the markets and consumed for decades and I do not see them disappearing anytime soon.

An upturn in its revenue growth trajectory or expansion in margins could spell better times for Super.

We have 370 guests and no members online