CSE GLOBAL: Will it return as much as 26-28 cents to shareholders?

The following was first posted in our NextInsight forum under the CSE Global thread by BNN, a shareholder of CSE Holdings.


CSE Global announced on 13 Aug 2013 that it its 100%-owned subsidiary in UK "is currently pursuing a separate listing on the London Stock Exchange."

The listing is "expected to be completed in the 2013 financial year."

On 30 Oct 2013, more details emerged in an announcement by the UK subsidiary, Servelec Group.

1. "Servelec is a profitable and cash generative business. In the year ended 31 December 2012, Servelec Group had revenues of £39.4 million giving an adjusted profit before tax of £11.9 million."
2. The Offer consists of existing shares being offered to certain institutional and other investors in the United Kingdom and elsewhere and New Shares which are only being offered to Eligible Employees under a separate Employee Offer of a value up to £250,000.
3. The Company (ie Servelec) will not receive any proceeds from the sale of the Existing Shares by CSE Global. The proceeds of the Employee Offer will be used for working capital and corporate purposes.
4. "Admission is expected to take place in early December 2013."

On the last point, clearly any special payout by CSE to shareholders is not too far away. 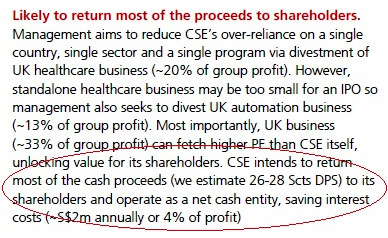 The question is, how much?

If the 26-28 cents a share payout is indeed the intended sum, it is very juicy, considering that CSE shares trade currently at 96 cents. The return would be about 28% within a short period of time.

CIMB, the other house that covers CSE, does not have a forecast on the return of cash. Is DBS Vickers' estimate too high?

First, we need to get a handle on the IPO valuation. While neither CSE nor Servelec has officially stated the IPO valuation, a number of publications in the UK have cited "up to £140 million."


This is equivalent to S$280 million or 54.3 Singapore cents gross per CSE share (based on CSE's 516 m outstanding shares) before accounting for IPO expenses, etc.

A return of 26-28 cents a share is about 50% of the IPO gross proceeds, so it's indeed possible for CSE to pay out this amount while retaining the rest for M&A.

But is £140 million valuation for Servelec possible in the first place?

The valuation is equivalent to 11.8 X Servelec's pre-tax profit in 2012  -- or 15.6X Servelec's after-tax profit of £9 million (assuming 24% tax rate on the £11.9 million pre-tax profit).
It does not look excessive at all and even less so if one assumes a double-digit growth rate for Servelec's earnings in 2013, which is coming to an end, and one looks ahead to earnings growth also in 2014.


DBS Vickers has a lower estimate for the IPO valuation.

So, in brief, the key questions are:

1. What valuation will the IPO fetch?

2. How much of the net proceeds will CSE pay to shareholders?

3. Will CSE pay out in one pop or will it stretch the payment over more than one payout?

We have 1201 guests and 5 members online