SuperBowl's investment properties as at end-2012. Source: annual reportSUPERBOWL is the subject of a takeover offer by sister company Hiap Hoe Limited and has generated a wide range of discussion in the NextInsight forum and other stock forums.

One aspect that hasn't caught much attention is the emergence of a substantial shareholder on 8 Oct.

In a filing to the Singapore Exchange, SuperBowl said Francis Siah Ooi Choe now has, in aggregate, a 5.258% direct and deemed interest in SuperBowl.

This followed the 8 Oct purchase of 1 m shares by Elinton Pte Ltd which he has a shareholding in, although the percentage shareholding was not revealed.

He holds 1.112 million shares of SuperBowl Holdings in his own name and has a deemed interest in 10.008 m shares held by his wife, Geraldine Tan Wan Cher.

The total value of the 17.12 million SuperBowl shares at market price currently is about $12.58 million.

All these facts don't make him a remarkable story even though, yes, the couple are quite wealthy.

But it does get more interesting when one wonders why they upped their stake in SuperBowl by 1 m shares at 73.87 cents a share.

Was it just to make some small money out of the 75-cent takeover offer of SuperBowl by Hiap Hoe Limited?

Probably not. Or were they betting on the takeover offer being revised upward? If so, they are not alone in this since the takeover offer is at a sharp discount to SuperBowl's net tangible asset estimated at $1.40 a share. (See Sumer's calculation).

What's also interesting is that as at 20 March this year, Mr and Mrs Siah and Elinton held in aggregate 14.0 million shares of SuperBowl, according to the company's 2012 annual report.

It appears that upped their stake by 2.12 million shares sometime between 20 March this year and the announcement of the takeover offer on the night of 7 Oct.

And as the screenshot right here shows, they have increased their stake in the past two years -- and patiently bid their time for the deep value in SuperBowl to be recognised. 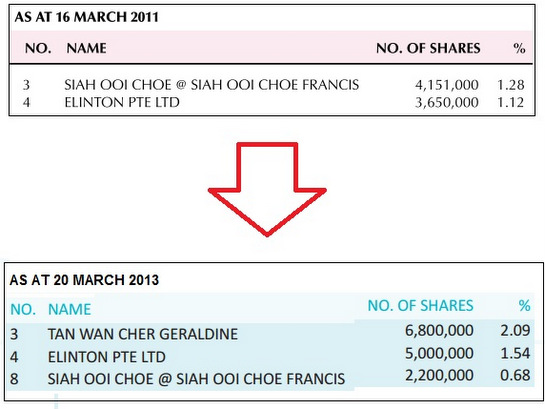 Screenshots from annual reports of SuperBowl show that Mr Siah and spouse and Elinton, in which he has a shareholding, have raised their stake in Superbowl in the past 2 years.


Mr Siah is quite a remarkable man.

A Google search leads one to a few articles that illuminate the man, and 'remarkable' is certainly not an overstatement of him and some key aspects of his life and career.

Briefly, he was a high-flying entrepreneur who was quoted in a 1984 New York Times article. He was described as the inventor of "a monolayer, high-molecular, high-density polyethylene bag - in layman's terms a very thin plastic bag with the rustle of fine paper."

Tragically, a year or so after the interview his business went under during the 1985-1987 economic recession. 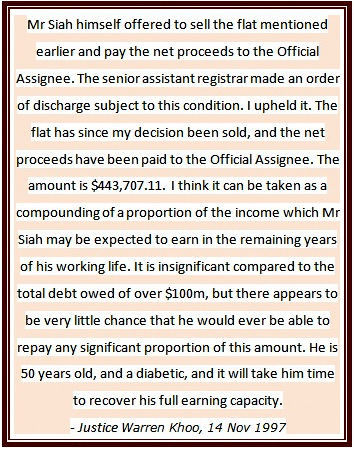 He was made a bankrupt as was his wife with debts of over S$100 million arising from personal guarantees he made for loans to his businesses.

They sold their flat and handed over the net proceeds of $443,707 to the Official Assignee.

In 1997, despite objections of institutional creditors who were still owed almost all of the debt, Mr Siah was discharged from bankruptcy after being a bankrupt for more than 10 years. (See this court document for details.)

He was then 50 years old and a diabetic, as the court document noted.

We didn't find any other article on the Web to tell us what he did since then but fast forward to today, he obviously has regained his wealth to a significant degree.

His investment in SuperBowl has something to do with that. The stock was trading at around 20 cents back in March 2011 when he and Elinton Pte Ltd held 7.801 million shares. These have now rocketed up 268% to 73.5 cents.

Could there be more upside? Perhaps Mr Siah, now aged 66, has some strong hunch that there is indeed.

You are right. I have not and did not include other assets including goodwill. It was meant to be just a cursory notation taking into account only its investment properties as a key contributory figure in computing whether there is any hidden reserves not yet reflective in the determination of its NAV. My calculations were, therefore. very preliminary and not meant to be all inclusive.
Quote
0 #4 Jane 2013-10-16 09:07
Hi CC Low, you have not included other assets, including the 50% stake in Zhongshan Park (ramada hotel & days hotel) + luxury developments such as Beverly. Cheers.
Quote
0 #3 C.C. Low 2013-10-16 08:44
My apologies for the comments on Superbowl and its financial networth in comments above. The figures are erroneous as the total investments properties held by the group should be approximately 64,000 sq ft and not 15,000 sq ft for which the revaluation of properties was based upon. This was grossly misrepresented.

Based on its book value of $29m if these properties were to be liquidated (at average of $3,000 p.s.f.x 64,000), it would add a very substantial 59 cents to its NAV of 34.9 cents, bringing the RNAV to approsimately 94 cents. This is almost 20 cents higher than Hiap Hoe's offer of 75 cents. This could be the reason of Mr Siah's interest in increasing his portfolio in Superbowl, and certainly not its operational core business of bowling.
Quote
0 #2 C.C. Low 2013-10-16 08:29
It's good that Mr Siah has reinvented himself and took stock of his second chance in life. My best wishes for his financial recovery.

On the issue of Superbowl, actually I do not know what the big hoo-haa is with the value of this counter. Hiap Hoe's offer may be at 75 cents, but looking at its half year results (30 Jun 2013) the financials doesn't seem to eat in with this value. It has not much cash float ($1m) and an outstanding current bank debt of $24.6m. Its investments in properties at book value was $29m spread over approximately 15,000 sq ft (from the tabulation in article above). Based on a liquidated basis at average of $3,000 p.s.f. these properties would fetch about $45m, adding only 14 cents to its NAV of 34.9 cents, making it 48.9 cents, which is still far below the 75 cents offer price.
Quote
0 #1 Joseph 2013-10-16 06:54
Don't forget Morph Investment. This is a private funds that focused on under-valued stocks like Lion Teck Chiang, Courts (prior to pte), Guthrie GTS, Superbowl etc. that are strong candidate for privatisation. Will they accept 75c-offer by HH? Most Unlikely.
Quote
Refresh comments list
NextInsight.net

We have 2174 guests and no members online