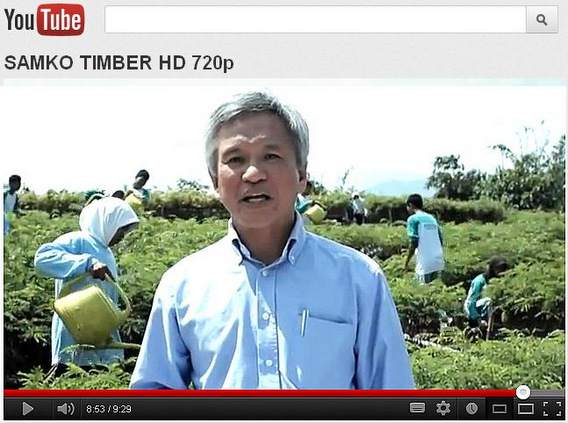 Click on the picture for a video of Samko Timber's business operations and business philosophy. Above: Aris Sunarko, CEO.


SAMKO TIMBER's 1Q net profit decreased 39% to Rp 16.6 billion (approx. S$2.1 million) but a substantial shareholder stepped in to scoop up 1.1 million shares (at 13.51 cents apiece) after the results announcement.

In fact, Sampoerna Forestry had also been buying small quantities of Samko Timber shares totalling 770,000 units (at the 13-14 cent level) through April and May, prior to the release of the announcement.

That is similar to the holding of the family of Aris Sunarko, the CEO.

Listed on the Singapore Exchange, Samko Timber  is one of the top-five tropical-hardwood plywood producers in the world with over 800,000 cubic metres of processing capacity and accounts for about 32% of tropical-hardwood plywood produced in Indonesia..
On May 15, Samko Timber reported a 5% rise in revenue to Rp718.9 billion (approx. S$91.8 million) in 1Q as a result of higher sales volume for both domestic and export segments.
The Indonesian housing and construction projects continued to support the Group’s domestic sales with sales volume improving by about 3% y-o-y.  Selling prices of the Group’s products maintained at about the same levels.

On the export front, sales surged in volume, though.


Gross margins decreased by 2.2 percentage points mainly because of a 28% y-o-y increase in labour costs to Rp148 billion (S$1.9 million), a result of an increase in minimum wages in Indonesia which took effect from January 2013.

The minimum wage in Indonesia varies from province to province, and depends on the standard of living in each area. In Jakarta, the minimum wage has risen 47% year-on-year to 2.2 million Indonesian rupiah a month (S$286) but in West Java it is only 1.25 million rupiah, up 42% from 850,000 rupiah last year.

Apart from the increase in minimum wages in Indonesia, the Group is concerned about a possible reduction in fuel subsidy resulting in higher fuel prices and further erosion of its gross margins.