HOTEL GRAND CENTRAL: RNAV could rise to $1.84 on 2 new hotels 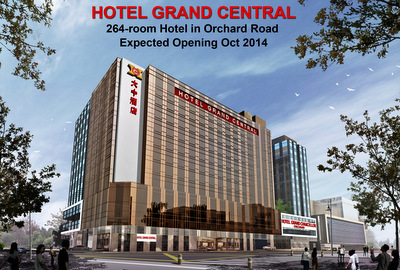 After 40 years, Hotel Grand Central Singapore (Orchard Road) stopped operations in 1st August 2012. On its site, 2 new hotels are coming up and will open in Oct 2014. Images: CompanyHotel Grand Central's announcement in 2012 that it would build two new hotels at the site of its old hotel in the Orchard Road area has not caused a stir as the company is off analysts' radar screens.
The impact of this project is now clear from its recently-released FY2012 results and its property valuation report.
The demolition of the old hotel resulted in an impairment of $13m, lowering 2012 profit to $16.8m. 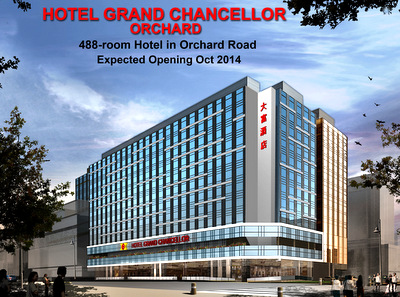 The land (freehold plus leasehold) near Orchard Road has been revalued to $216m.

Together with $130m development cost, the cost of each of the 752 rooms of the two new hotels will be $477k.
Hotel Grand Central has another hotel in Singapore -- the 328-room Grand Chancellor which is sited in Little India.

The valuer has assessed each room to be worth $ 613k, which is close to the $622k transacted for Ibis Novena at Balestier Road recently. Both hotels are on leasehold land.
If the value of each 3-star hotel room in the Orchard Road belt is a conservative $700k, the two new hotels will, on completion in 2014, give rise to a surplus of $180m, raising Hotel Grand Central's NAV from $1.53 to $1.84 per share.

In comparison, the stock traded recently at 97 cents, giving the company a market capitalisation of S$553 million.

History of discipline and prudence

Hotel Grand Central started off with only one hotel in Orchard Road and, over the years, expanded its footprint to Malaysia, Australia, New Zealand and China (see table).
In the early days, the company bought hotels and commercial properties in Australia and New Zealand when prices were depressed and when both Australian and New Zealand currencies were weak.

Shareholders' concern over the huge borrowings to fund the acquisitions dissipated only when the commercial properties, principally in Wellington (where planning requirements for new developments are stringent), were sold at higher prices and favourable exchange rates.

The company ploughed the money into building the hotel in Little India, buying more overseas hotels and, lately, redeveloping the flagship hotel in Orchard for value enhancement. With all these activities costing heavy outlays, Grand Central still has net cash of $47m.

The management's strict adherence to discipline and prudence has enabled Hotel Grand Central to grow rapidly in the last 20 years on an even keel. 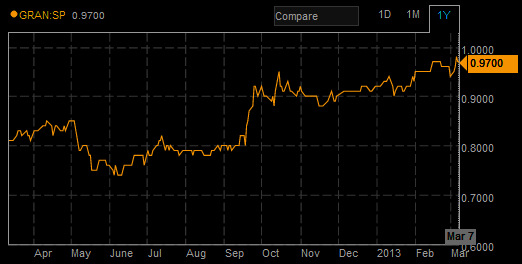 Hotel Grand Central's performance in the past one year.
Chart: Bloomberg

We have 1736 guests and no members online