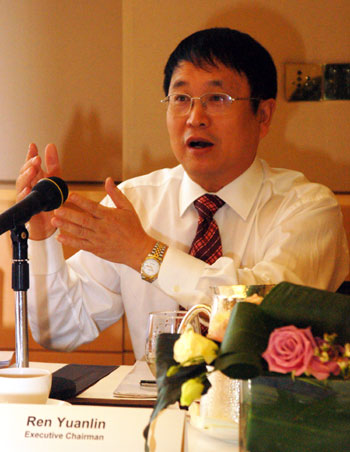 Although no shipbuilders were mentioned by name in the latest policy paper from Beijing, the plan to strengthen and streamline the PRC's shipyards should come as a manageable challenge to SGX-listed Yangzijiang Shipbuilding, given its emphasis on technological upgrades and profitability. Pictured above is Mr. Ren Yuanlin, the firm's executive chairman. Photo: Sim Kih

There is a new beacon of hope for China’s shipbuilders on the horizon.

The country recently said it plans to make its top 10 shipbuilders account for 70% of the PRC’s output, and it will pool resources to more closely unite massive yard complexes in the Bohai Bay region, the Yangzte River Delta and the Pearl River Delta to make the country’s shipbuilding industry more efficient and competitive.

So what does this mean for shipyards like Singapore- and Taiwan-listed Yangzijiang Shipbuilding?

As part of the country’s 12th Five-year Plan (2011-2015), the government recently stated that it will prioritize the domestic shipbuilding sector as a key industry.

Pursuant to this strategy, it will strive to bring more synergy to the three major shipbuilding regions in the country’s northeast (Bohai Bay), east (Yangtze River Delta) and southeast (Pearl River Delta).

Ultimately, Beijing hopes to make the three industrialized regions act in a more concerted fashion in terms of resource and technology sharing as well as logistical and supply management, with the ultimate goal of making the combined zones a “world class” production base for both container and cargo vessels.

The statement from the industry planner said the most positive upshot of this campaign will be to allow China’s top 10 shipbuilders by tonnage to account for at least 70% of the country’s total output.

The working plan statement added that it expected to see over 200 bln yuan in investment over the five-year period in marine engineering equipment like offshore oil platforms, which would put the industry sector spending at over 20% of the global total for the timeframe.

China is aiming to boost the competitiveness and profitability of its shipbuilding sector. With recent performances like that of Yangzijiang (above), some yards should have a head start in the national campaign. (Net profit attributable to equity holders in RMB mln)

The statement added that during the process of carrying out the plan, the strongest and most competitive shipbuilders will rise to the surface and constitute the new, healthier, more viable face of China’s shipbuilding sector.

But this would naturally bring new challenges to smaller players who were unable to achieve economies of scale advantages, or whose production methodologies were in some way outdated.

This will have an immediate impact on those shipyards that resist regular upgrades in technological prowess, as the plan intends to rely on the crème de la crème of the technically-advanced shipbuilders to boost the overall competitiveness of China’s shipbuilding sector.

This was especially necessary given the technological gap that still existed between the PRC and its two shipbuilding neighbors – South Korea and Japan.

The statement emphasized that “technical synthesis” would help propel the country’s shipbuilding sector into a truly global power.

It is estimated that the current number of enterprises in Mainland China already attaining the ideal technological level to allow them to stand on their own and compete head-to-head with the world’s best only number around 50.

While not mentioning any shipyards by name, it said that as things stand, it was confident that the new emphasis on the industry would further help these 50 shipbuilders rise to the top of the domestic sector and practice international standards of production.

This will also help raise the international profile and brand name of domestic producers – a phenomenon that will certainly translate into more global orders.

The plan was to achieve 1.2 trln yuan in new ship orders by 2015, with over 80 bln usd of this coming from exports, the statement added, without providing comparisons with current levels.

YANGZIJIANG: Profit And Dividend Rise - Stock Is A Sell, Hold Or Buy?

YANGZIJIANG is a potential 3-bagger

We have 829 guests and no members online