I Can See Clearly Now: One Hong Kong listco not lacking in visibility is Comtec Solar, who just received an 'Outperform' initiation from Macquarie. Photo: Comtec

Translated by Andrew Vanburen from a Chinese-language blog in Sinafinance

LAST WEEK'S SELLOFFS in Hong Kong were a necessary exercise as there was just too much air in the tires.

But it looks like we better brace ourselves for the possibility of a few more weeks of corrections.

Last week we saw the high-flying benchmark Hang Seng Index let a lot of air out of the tires – over a thousand points worth at some nadirs – suggesting that an honest to goodness correction was underway.

This is keeping a lot of the risk-averse investing public on the sidelines, but they should be peeking from around the corners once the dust settles.

Also, let’s not forget that there are still a fair number of listed firms that have yet to release their full-year 2011 earnings reports and investors should be aware of the strong possibility of a rush of capital back into the market the moment it becomes clear which established blue chips or high-potential growth counters might be providing surprises on the upside.

Indicative of the growing tentativeness of retail investors is the growing preference for long-term potential over quick gains, as near term profit-taking is becoming harder as values become deflated.

There is short-term bottom-line support for the benchmark index at the 20,500 level while it should also have trouble maintaining any tenable position above 21,000 for any length of time.

But there is still enough confidence left over from the January-February run as well as in the potential for happy stories from yet-to-report counters to keep the periodic corrections in check.

In other words, the lingering buoyancy among the investing community has, at least of late, usually recouped half the value of sporadic dips in a very short space of time – an ‘overreaction / reaction’ cycle if you will.

This could point towards the possibility of yet higher upside tests on the Index, but the question is not so much the level, but the duration of the visit.

Therefore, it is hard to be too sanguine about the repeat of anything resembling the mini bull run of the first two months of the year repeating itself anytime soon.

More likely is that sentiment will continue to be shaped by the trickling out of annual reports over the next few weeks which will reach deluge levels the closer we get to the reporting deadline for compliant listcos.

But as the deadline approaches, the number of potential surprises is whittled down considerably and investors will once again be looking for long-term drivers and visibility to justify either their capital participation – either initial or continued. 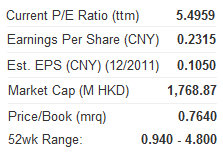 Not helping matters is the recent announcement by the People’s Bank of China governor that any more reserve rate requirement (RRR) reductions by China’s central bank going forward are not purposely meant to boost the capital markets or real estate sector.

While the announcement is perhaps just a formality and the net result of any credit easing moves from Beijing will ultimately be that a boost to both the stock market and developers will take place, it does suggest that the PBOC will not be opening the floodgates anytime soon.

Also, the surprisingly high PRC trade deficit in February – some 32 bln usd and the largest in a decade – will continue to ruffle feathers in Hong Kong as many of the H-shares as well as Hong Kong-based firms comprising the Hang Seng Index are still heavily reliant on the age old model of Made in China/Sell in West.

It will apparently take some time for the market to get onboard Beijing’s campaign to push for China’s consumers to play a bigger role in supporting the country’s GDP growth.

This won't do much in the near-term to boost confidence in the countless ranks of listcos with heavy reliance on external demand, and could mean more mini-corrections to come.

We have 3599 guests and no members online