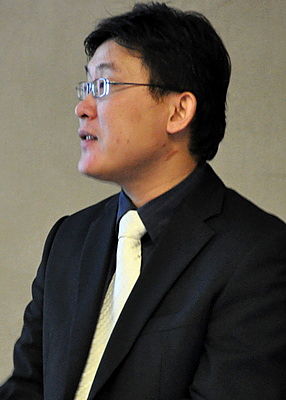 THE LOUSY news is that World Precision Machinery (WPM) has just had its worst quarter in 5 years, with net profit down 96.7% to RMB1.4 million.

Its stock price tanked from 42 cents to 34 cents after the release of the results last week.

WPM is a manufacturer of stamping machines for a wide range of industries such as automotive, electronics and white goods.

It said it had been affected by the slowdown in the Chinese economy and in exports of China-made electronics and home appliances.

But at a briefing for analysts and fund managers on Friday (Nov 16), WPM's chief financial officer Samuel Ng and non-executive director Cheng Hong also pointed out that:

♦ The company can afford to pay a dividend, as it has done in past years. The only question is, how much?

The company doesn't have a fixed dividend policy, and has paid out as much as 100% of its earnings previously.

♦ The 3Q net profit was dragged down by one-off items totalling RMB11.1 million. (For more on this, see press release)

♦ Business prospects are looking up gradually. 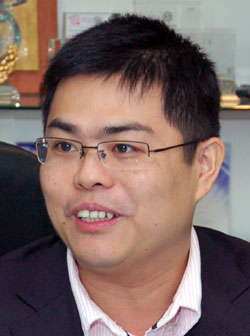 Regarding the cash position, Mr Cheng explained that WPM had raised its stock of raw materials (ie steel mainly) to about RM400 million as at end-Sept 2012 as the price of steel fell.

As a result, over the next 1 or 2 quarters, WPM expects to enjoy positive cashflow from its operations as it would need to buy a lot less steel than usual.

Gross profit margins are expected to improve too, given the lower cost of steel it has bought.

While its cash level has gone up, note, however, that WPM now has higher bank borrowings. From RMB250 million as at end-2011, this reached RMB 427 million as at end-Sept 2012. The interest rate is 6+% per annum.

The rise in borrowings is to help finance its new plant in Shenyang.

Here are some of the questions and answers from the briefing:

Q: What are the benefits you get from being part of World Group?

They negotiate the price of steel supplies and we get a 3% discount. The World Group produces a lot of machinery such as agricultural and construction equipment, and needs a lot of steel.

Q: How big is World Group?

Q: All your revenue is from third parties?

Yes. 100%. We don't have many related party transactions.

Q: How many workers do you have and what do they account for in cost of sales?

We have about 2,400 workers and about 200 sales and after-sales staff. Wages are about 10% of cost of sales while 83% is steel. The rest are manufacturing overheads and utilities.

Q: What is the average wage per worker?

They are paid according to the work done. As for our sales staff, they are paid commissions and generally, they will have to bear any bad debt of customers.

Q What is your capex for next year?

For Danyang and Shenyang plants, the total would be around RMB180 million. The Shenyang plant will start trial runs around March next year.

Q: If steel prices fluctuate, do you have to pass on cost savings or cost increases to your customers?

Normally, when we sign a contract with the customer, we know our raw material costs. We would place orders for our raw materials, so there is no exposure to further changes in the market price of steel.

Things have stabilised. Machinery orders from this sector have dropped a lot in the past few months, due to a slowdown in the Chinese property market and import-export market.

Q: World Precision stock is cheap now. Will it be privatised?

In 2007, there was a privatisation offer at 75 cents but it did not go through. I don't think the major shareholder wants to privatise it now. He wants the company to grow very big -- which is why he opened a new factory in Shenyang.


For background on the business of the company, go to: WORLD PRECISION: First photo essay on its operations

I think you should privatise the Company and go HK for IPO. Singapore investors are stupid and they don't appreciate your Company.
Quote
Refresh comments list
NextInsight.net

We have 1173 guests and no members online