SWIBER: Laggard in the oil and gas play

THE EDGE SINGAPORE weekly, in its issue 17 – 23 Sep 2012, had outlined charts for some oil and gas stocks such as Ezion, Kreuz, Ezra, Nam Cheong etc.

I would like to bring readers’ attention to Swiber whose chart looks interesting.

Based on Chart 1 below, Swiber is forming higher highs and higher lows.

Open balance volume or OBV which incorporates volume to price changes (to detect momentum) is almost near an all time high.

ADX is at 43 with DI positively placed (i.e indicating the presence of a trend). 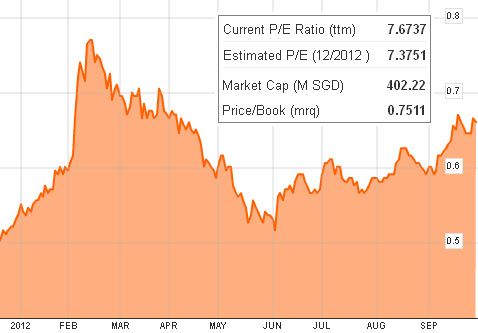 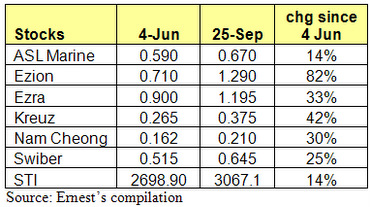 Laggard among oil and gas stocks

However, this pales in comparison to its peers. For example, Ezion and Kreuz have rallied 82% and 33%, respectively since 4 Jun 12.

It is also noteworthy that Swiber announced significant contracts during this period which may have contributed to its rally to a certain extent. (i.e without the contract wins, Swiber’s share price may have climbed to a lesser extent).

As at Aug 2012, Swiber has about US$1.6b of orders with an estimated US$1.0b from new contract wins awarded year to date.

According to Table 2 below, Capex and Operating expenditure (“Opex”) are expected to reach a record US$728b and US$500b respectively in 2012.

Among the regions, Asia Pacific and Middle East are key growth regions with a compound annual growth rate of 7.9% and 8.4% respectively between 2012 to 2016.

Swiber has presence in both of these regions. 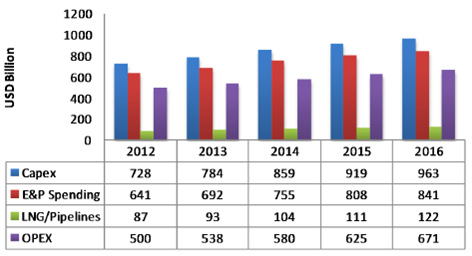 Swiber’s market capitalization is around $393m, of which one third is attributable to Kreuz. In other words, Swiber’s business (ex Kreuz) is only worth approximately S$261m.

Some noteworthy points though…

Redemptions of notes and bonds

With reference to its 1HFY12 results, it is noteworthy that Swiber faces the redemption of its multicurrency medium term notes series 7 & 10, amounting to US$170m in 2HFY12.

In addition, Swiber’s US$100m convertible bond notes may be redeemed in Oct 2012. As a result, Swiber has been exploring various funding options.

On 25 Sep, Swiber has issued S$80m, 9.75% senior perpetual securities which may be used for the redemption. Going forward, it is likely that Swiber may face higher interest expenses.

Laggard = does not mean it will rise soon or definitely rise

Being a laggard does not mean that it will definitely rise, or rise soon. Furthermore, there may be reasons why the stock is unloved by the market.

Valuations not excessive against peers

With reference to Table 3 below, Swiber’s valuations do not seem excessive.

Its ROE pales in comparison with that of Ezion but if the company can continue to execute on its contracts while keeping costs in check, it is likely that the ROE may be able to improve in the quarters ahead.


P.S: This is just an introduction on Swiber. Readers who are interested in Swiber can email me at This email address is being protected from spambots. You need JavaScript enabled to view it. for the analyst reports.

NEO GROUP – Delivers the restaurant to you

We have 775 guests and no members online