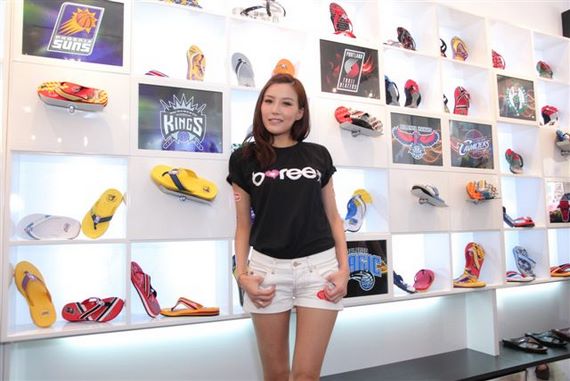 Adidas and Nike sandals go for ASPs of around 300-400 yuan per pair while Baofeng’s are closer to 200 yuan. Baofeng's 3-year deal with the NBA comes in many colors. Photo: Baofeng

China’s top slipper firm said the high-profile location is all about attracting more shoppers to the brand, with a little help from the NBA.

“The value of a grand opening ribbon cutting event like this is not so much in immediate sales but in promoting our brand and its association with the NBA,” Baofeng CFO Ronald Kwok told NextInsight. 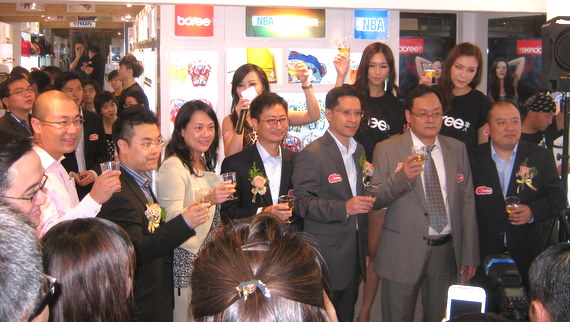 He added that the popularity of the National Basketball Association (NBA) in Hong Kong would certainly help the company attract more eyes and footfall traffic through its new store.

In May of this year, Baofeng signed a three-year deal to produce, distribute and sell the NBA-branded slippers and sandals in Hong Kong, Macau and most importantly – Mainland China.

The following is a short video-clip by Aries Consulting's Frances Leung of the opening of the Baofeng store....

The NBA has been a huge hit in the 1.3 billion strong PRC market ever since the 2.3 meter tall Yao Ming first donned his red and white Houston Rockets jersey in 2002.

Although the latter part of the Shanghai native’s career was plagued by injuries, he virtually singlehandedly turned the world’s most populous country into arguably the most basketball-crazed nation on earth.

And Baofeng is well-poised to take full advantage of this enduring phenomenon.

The new flagship store is adjacent to a bustling metro station and just a couple minutes walk from the picturesque promenade alongside Victoria Harbor. 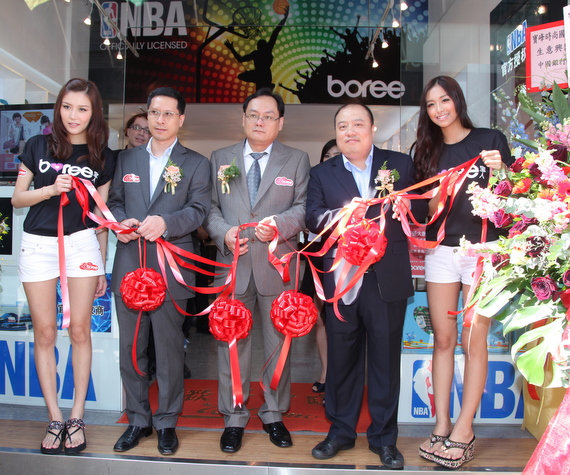 The ‘Boree’ logo – one of the firm’s self-developed brands along with ‘Baofeng’ – is prominently displayed outside the flagship store alongside that of the NBA’s globally recognizable logo.

Management has commented that they believe for every 10 young shoppers passing by, one or two will be very tempted to pop into the store out of curiosity to see what the NBA connection is.

Indeed, it becomes clear upon entering the store that Baofeng takes its NBA tieup very seriously, and is hoping for a slam dunk from piggybacking on the popularity of the Association.

The walls just inside the main door are covered with mini displays holding slippers resplendent in the colors and logos from all 30 NBA teams.

"The partnership will further broaden Baofeng's line of products and help us achieve sustainable business growth by reaching more consumers through the NBA's growing fan base," said CEO and Executive Director Chen Qingwei at the time of the NBA deal earlier this year.

Baofeng was not too worried about the major sportswear players taking away market share.“Adidas and Nike all make sandals and similar casual footwear, but their ASPs are around 300-400 yuan per pair. Ours are closer to 200, so there will always be a market demand for our products,” Mr. Chen said, though I picked up a pair of Orlando Magic slippers for just 79 hkd.

Baofeng has had a very eventful year so far.

It began with quite a bang for Baofeng, with its listing in Hong Kong in January receiving an overwhelming oversubscription market response and reaching 2.02 hkd per share.

And with the current valuation at around 1.13 hkd, Baofeng is currently lingering around half of its IPO level.

Then in April, Baofeng began negotiations with Disney to jointly develop the fast-growing Southeast Asia market.

The company is a strong believer in that region’s potential, given its “endless summer” climate and generally less formal attitude regarding footwear in general.

The following month, Baofeng signed the blockbuster deal with the NBA, and now it has its perfect launch pad from which to market its brand with some of the world’s most popular basketball teams.

And to top it all off, Baofeng had a respectable first half in which revenue surged nearly 30% year-on-year to around 595 mln yuan.

Now that the first half is history and the halftime show is over, it will be interesting for both investors and NBA fans alike to see how this basketball- and beach-friendly casual footwear firm will fare by year end and beyond.

0 #1 Lin 2011-09-15 18:31
I think most investors might be somewhat concerned about the possible strike for the NBA this coming season (spoiled and pampered players!:-) But I have been to PRC and HK and they are more than ready to forgive and forget, and NBA is truly king of the hill over there
Quote
Refresh comments list
NextInsight.net

We have 2512 guests and no members online