WITH THE dramatic service breakdowns of the past few days, SMRT Corp is in hot soup.

As a result, the CEO, Saw Phaik Hwa, in particular, has been the subject of several media articles which brought up the question of whether she should resign.

While the service breakdowns are technical and customer service issues, it would be interesting to take a look at the financial and stock performance of the company.

And, we found, that it has grown its revenue, net profit and dividends during Ms Saw's watch from 2002. (See charts below)

The stock price has tracked the business performance, having risen about 150% since the start of 2002 at around 72 cents and closing at $1.82 last Friday.

Add in the net dividends totalling 56.35 cents from FY03 (financial year ended March) to FY11, and the return rises to an excellent 230%. That would place it among the best investments available on the Singapore Exchange -- and, by the way, surprise investors who favour small caps for their higher growth potential.

SMRT said it expected cost pressures particularly energy costs and staff and related costs to impact the Group’s performance in 3QFY12 and the next 12 months.

It said the profitability of the Group in FY2012 may not be maintained at the previous year’s level. 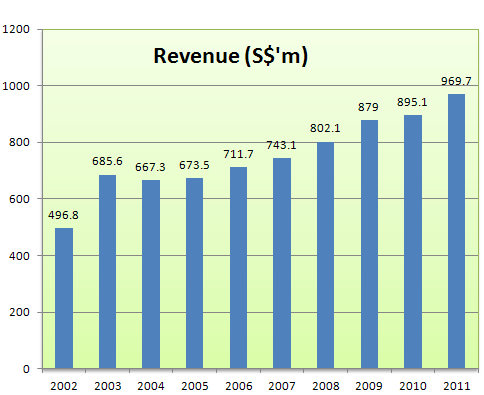 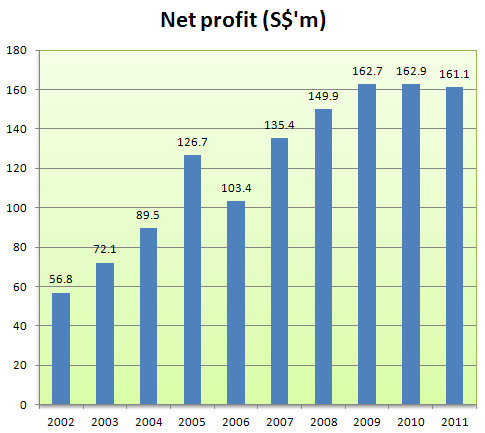 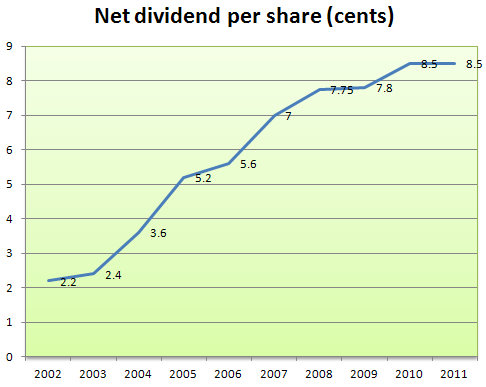 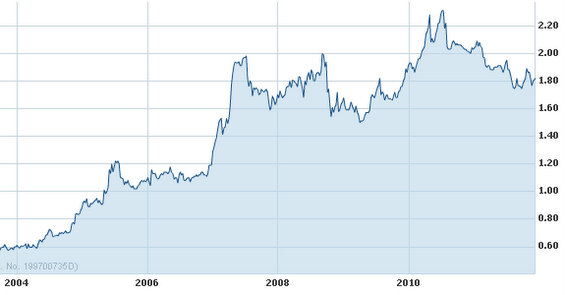 Actually, HDB is an example of nationalising public housing since it's a statutory board. When Dr Goh keng Swee was around, the policymakers could really afford quality and cheap housing. But now, things change not because also of the policy makers. of course, HDB used to operate at cost recovery but everything changed since 1994 or when Mah took over as HDB right now is also very profit-oriented.

In most countries, most transport companies tend to be in the loss as people there have the options to take cars and their land is big. In Singapore, the situation is contrastly different as our land is small and cars are expensive. No way can transport companies make a loss when over half of the population here rely on public transport everyday. so, if operate on a cost recovery basis, nationalising makes good sense, provided the policymakers want to do a good job.

80% payout ratio is too much... which means that majority of the fare hike doesn't contribute to the maintainence at all.

in my opinion, there could be another reason policymakers want to have a fare hike. since next yr projection is a slower growth, raising transport fare can artifically inflate the GDP figures to demonstrate growth. But this is a very bad way, because if raising transport fare, it will also affect other businesses as well and lower to middle class are the ones that suffer the most.
Quote
0 #12 Power 2011-12-22 04:48
newbiestock, Do you know of very good public service operators in the world which are not privatised?

As Singapore is very small, public transport is an essential and concerns the daily livelihood of every Singaporean.

whether an oragnisation is efficient or not, it depends on the management running it. in my opinion, public transport should not be profit oriented. The increase in public transport fare affects the spending decision of many individuals and many small businesses. When Dr Goh Keng Swee was around, HDB could offer us cheap and efficient housing. That's an example of a good nationalisation . But why not? Maybe, the present leaders today are too obsessed with meaningless GDP growth and making money and they do not wish to offer housing at cost recovery basis. In my opinion, Ms Saw is not a suitable person to run an organisation like SMRT as she has no technical experience.
Quote
0 #10 Investor+1 2011-12-20 08:34
newbiestock, there are many public services which are commercial-orie nted and listed on stock exchanges, including power companies. It's a fact of life that being commercial-orie nted and listed as stocks, the entities are driven towards greater efficiency and value for money. I agree with your point, nevertheless, that a lower payout dividend ratio would have made things more palatable for commuters as it averts the need for a fare increase. It's a hard balancing act, at the end of the day. We will have to wait for the Commission of Inquiry findings to know what has gone wrong in the incidents, instead of being quick on the draw and fire at the CEO and the management.
Quote
0 #9 newbiestock 2011-12-20 04:21
SMRT payout ratio was 80% last year. If it can afford to give out 80% of the dividend, the fare hike doesn't seem justifiable at all. They can just cut dividend, cut CEO pay to offset the rising operating costs.
Quote
0 #8 newbiestock 2011-12-20 04:12
I will never buy any SMRT or SBS or comfort shares. To me, i feel our local transport companies should be delisted and be nationalised as what WP suggests. There should be a strong distinction between what is a public service vs a profit oriented entity. If the company's providing a public service, then there should be a cap on its profit limits.

Ms Saw should just be sacked or give up her entire bonus salary for the year until the whole problem is resolved.
Quote
0 #7 Angry Singaporean commuter 2011-12-19 18:44
Another incident today probably spells the last nail on her coffin.

The arguing point is whether commuters are shareholders. No doubt that Saw has brought much values to the shareholders of SMRT but sadly, she did not improve the lousy system in SMART and LTA. It is a problem waiting to happen.
Quote
0 #6 Rose 2011-12-19 13:56
As a public listed company, the CEO can only be sacked by the Board, under SGX Listing rules. Or the majority shareholders of SMRT can convene an EGM for No Confidence vote in her. Anyway, I think this resignation thing has gone overboard -- people are getting worked up and leaving their rational senses behind
Quote
0 #5 DY 2011-12-19 10:30
I'd wager that over the next 10 - 15 years, SMRT will continue to do just fine.

And I'd be happy to see SMRT's price get whacked because of this slight 'breakdown' problem.
Quote
0 #4 Kewei 2011-12-19 08:15
Equity is about the future and not about the past. Do you expect SMRT to grow like it did in the past? Higher cost (Labour, power etc), and a potentially huge fine and repair bills etc.

I'm not that optimistic about the stock price.
Quote
12
Refresh comments list
NextInsight.net

We have 583 guests and no members online