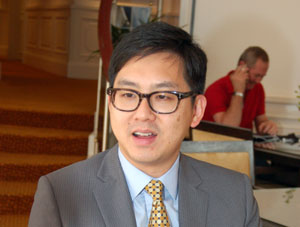 'Our Henan factory was a showcase to the government which led to the subsidy,' said executive director Ken Wu. Photo by Sim Kih

ANWELL’S FORAY into the solar business is finally paying off. 3Q2011 was its first profitable quarter in the one and a half years since it started mass production of thin film solar panels.

Firstly, its earnings are up. Its 3Q2011 gross profit doubled to HK$39.7 million mainly due to the increase in the gross profit margin of the solar business.

It also booked gains of HK$359.4 million on revaluation and goodwill from its acquisition of Henan Sungen Solar Fab.

Secondly, its balance sheet significantly improved after it received a total of Rmb 800 million (HK$980.8 million) from the municipal government of Dongguan this year for the long-term funding its second thin film solar panel manufacturing base in Dongguan.

In Aug, its subsidiary, Dongguan Anwell Digital Machinery, received Rmb 700 million in capital injection from the municipal government for a 19.5% stake, valuing the subsidiary at S$680 million (RMB3.6 billion). 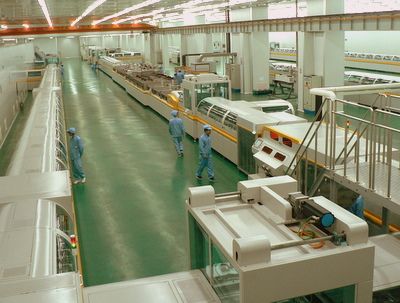 Including pledged cash of HK$546.4 million, the cash injection boosted Anwell’s cash reserves to a whopping HK$1.4 billion as at 30 Sep 2011, more than five times what it had at the end of last year.

In addition to this, it also secured a total of Rmb 1.2 billion in low-cost credit financing facilities for its thin film solar panel plants in Anyang and Dongguan from the municipal governments of both cities.

It currently has solar panel production capacity of 100 MW and intends to increase this by 15 times to 1.5 GW within 5 years.

The good news about the government support the company has secured is its production ramp-up plans are now possible, according to Mr Wu. 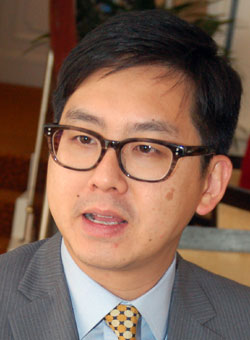 Mr Wu explained that Anwell is attracting such a large amount of government funds due to its unique position as China’s only manufacturer of in-house equipment capability for highly advanced solar technology.

"We have one of the best R&D teams in solar panels,” he said.

The conversion efficiency of Anwell’s thin-film panels is one of the highest in the market and thin-film is newer compared to the more mature crystalized silicon technology.

The company currently manufactures single-junction products and has completed the R&D necessary for rolling out next generation tandem junction products, which can further improve conversion efficiency.

Its strategy is to focus on thin-film and be a vertically integrated player with in-house equipment manufacturing capability.

”We expect our solar business to contribute more than 50% of next year’s revenue and group margins to improve as a result,” he said.

Another 40% is expected to come from providing solar panels for solar farm projects. The company has track record for such projects in Europe. It is currently on a solar project in India worth US$20 million that is scheduled for delivery in 2Q2012.

The remaining 30% is expected to be in the form of BOT models for solar farms outside China. It has already completed a few small BOT projects in Europe.

”The solar market is bigger than for our traditional optical products and margins are also better,” said Mr Wu.

The thin-film market is expected to grow more than 15-fold over 2010 to US$44 billion in 2017, according to WinterGreen.

According to the terms of the first agreement (for RMB500 million), the Company shall repay the amount to the Municipal Government of Dongguan according to an agreed schedule starting from the end of three years. According to the terms of the second agreement (for RMB700 million), the Municipal Government of Dongguan has a put option to sell its shareholdings of a subsidiary, Dongguan Anwell Digital Machinery Co Ltd. to the Company after 5 years following the capital injection. In light of the terms of these agreements and the relevant accounting standards, the funding is classified as Borrowings under long-term liabilities in the Consolidated Balance Sheet of the Company.
Quote
Refresh comments list
NextInsight.net

We have 1614 guests and no members online