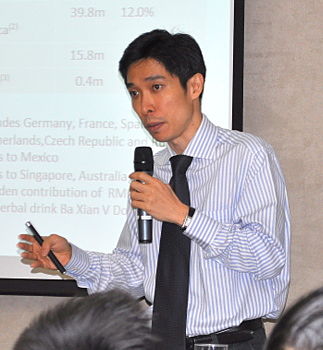 SFGI show-cased demo of its new TV-commercial, which will be aired after the Chinese New Year.

We were delighted to know that its Fruit&Veg series “鲜绿园” has won an innovative nutritional award “第三届中国食品行业- 杰出营养新奖”, and its new product, Loquat Juice, was sold out in Hangzhou recently due to overwhelming response.

Contribution from the new beverage division had outperformed our expectations in 2Q and 3Q, resulting in the upwards revisions of our initial FY10F net profit forecast from RMB93m to RMB114m.

We see upside risks to our previous estimates and believe SFGI could score a hat-trick in 4Q10. 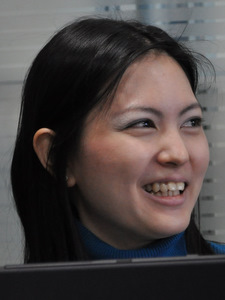 Leong Yeem Mei, VP, Corporate Communications & Investor Relations for Ziwo. She is a sister-in-law of Parry Ng (photo at top of the page).
Analyst: Leong Weihao

4Q10 results expected to meet our forecasts (if not better). Recent chat with management suggests that stronger business volumes were seen in 4Q10 compared to 3Q10.

This is likely a seasonal trend where its customers start building up its inventory in anticipation of strong demand during the Chinese New Year period.

The surge in natural rubber (raw material) prices during the quarter may dampen margins and hence profitability slightly.

Overall, we expect the company’s 4Q10 results to meet our forecasts (if not better), as we are of the view that the anticipated strong turnover could mitigate effects of margin pressure.

Re-pegging valuations. In view of the (i) impending TDR exercise; and (ii) strong profit growth, we are re-pegging the valuations for Ziwo from 4x CY12 P/E to 5x CY12 P/E (3-year historical average of peers) to more accurately reflect its intrinsic value.

We keep our earnings estimates intact, but raise our target price from S$0.43 to S$0.54, now based on 5x CY12 P/E, pegged at the 3-year historical trading average of peers.

Reiterating our BUY recommendation on the stock as we see more positives ahead for the company.


Recent story: ZIWO: Up 79% since IPO on strong business; headed for TDR listing

In valuing the stock of Tiger Airways, we used a blended mix of DCF and P/E multiple. In the DCF valuation methodology, we used a cost of equity of 10.8% and a terminal growth rate of 0%.

We believe that a DCF methodology would allow us to capture the long run growth prospects of the company over the next 5 years with their plans to increase the number of aircraft to 68 by end 2015 from the current fleet of 25.

In the P/E valuation, we expect the stock to command above peer average valuations of 12.0X FY12 EPS as we expect decent growth in the earnings of the company over the next 5 years.

Our target price of $1.65 reflects our view that despite our expectations of growth in the company, the current valuation for the stock is rich and could underperform the broad market over the next twelve months.

We have 1202 guests and no members online