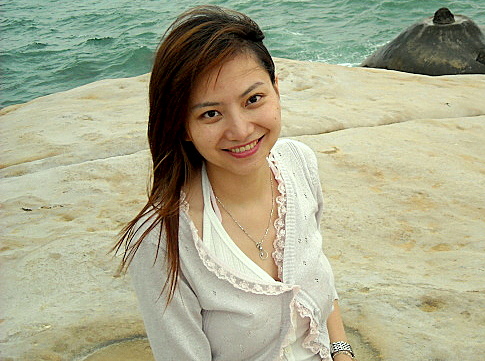 "China has 1.3 bln people which is 10 times that of Japan. So is anyone shocked that our economy is slightly bigger? Look around you, there is activity here everywhere, all day long. But Japan, at least recently, seems like a sleeping giant still trying to get back on track, economically." Shenzhen kindergarten teacher Christy Tsui
CHRISTY TSUI, a kindergarten teacher in Shenzhen, sees signs of rapid progress in China’s southern coastal boomtown every day.
Born and raised here, the 20-something has also accumulated a respectable assortment of visas in her passport -- having visited Singapore and other Asian destinations several times -- and therefore has keen insight into what makes Shenzhen unique from a comparative sense.
It is not often that you meet such a well traveled and cosmopolitan teacher of young children in China.
The perhaps somewhat unfortunate image of public school teachers in the PRC is of a plainly dressed and exhausted middle-aged woman who usually spends six or seven days a week cramming tiny minds with whatever data they might need to have the best chance of progressing to the most “upscale” first grade in Shenzhen, and would have little time left over for attention to personal appearance, let alone the energy or means to go country-hopping, camera in hand.
But that pretty much sums up the very presentable teacher Christy, who has a lust for teaching just as strong as her wanderlust.
In fact, she was not too long removed from a recent shopping trip to Singapore when I met up with her recently in Shenzhen.
NextInsight: First of all, you must have heard the news about China this week that it is now officially bigger than Japan, at least economically and perhaps only fleetingly – depending on full-year GDP growth. How does that make you feel as a Chinese citizen, and a native of one of its most developed cities – Shenzhen?
Christy: I want to say surprised, but that wouldn’t be very truthful. I have been here in Shenzhen all my life – I won’t say exactly how many years – and I have been to Japan a few times as a tourist, so I could definitely see it coming.

Part of me is proud of course, as a Chinese. But part of me is just “oh well, any other news?” Because I don’t see how this could not happen, if only eventually.
China has 1.3 bln people which is 10 times that of Japan. So is anyone shocked that our economy is slightly bigger? Look around you, there is activity here everywhere, all day long. But Japan, at least recently, seems like a sleeping giant still trying to get back on track, economically.
I was on a tour in Japan recently and it seemed like we Chinese tourists were the only ones pulling out our wallets.

Let’s back up and find out a bit about your background and career. Give us a synopsis.
Christy: I was born and raised here, and have been here all my life. To be frank, I pursued a career in teaching because it seemed quite flexible and stable. Schools don’t have shareholders or bankruptcies, so it seemed like a solid source of steady income and it certainly made my parents happy.
Oh, and I love the long vacations because as much as I love Shenzhen – I also love to leave it often and see other places, both in China and overseas.

That must not only give you a an excellent basis for comparison, travelling as much as you do, but having been here all your life you are valuable historian, like it or not. What can you tell us about Shenzhen over the years and how it differs from some of the other cities you’ve visited? 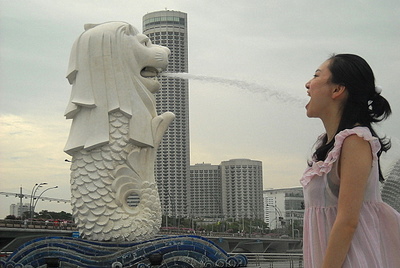 Lion Tamer: Kindergarten teacher Christy Tsui likes to visit Singapore and other Asian destinations
Christy: Absolutely. I know Shenzhen isn’t the most historically rich major city in the world. Some might argue that it basically didn’t exist as much of a city until former Chinese leader Deng Xiaoping decided to use it as a proving ground for his opening-up policies.

And with so many outsiders pouring into the city every day, native Shenzheners like me are actually a minority here, which doesn’t do much to create a sense of community nor does it contribute much to more genteel behavior patterns of “old” cities.

But for some reason, after a few days traveling in some far flung city, I almost always begin to get a bit homesick for Shenzhen.

I think it comes down to the energy, the almost palpable pulse of activity that runs through the city. I’m no sociologist, but that sort of feeling is probably quite addictive. Maybe that’s why I find it hard to sleep sometimes in quiet inns I might book in rural Japan, or in the far interior of China. Turning on a fan at night, or TV at a low volume helps, in case you were wondering.

So what are some of the biggest changes you’ve witnessed in Shenzhen during your 20 some odd years here?

Christy: I hope this doesn’t come across as a tedious answer, but it’s the buildings.

The amount of construction I have seen so far in Shenzhen since as far back as I can remember seems to me far more frenzied, hectic, and well... plain busy that anywhere else I have travelled. That pure volume of building activity is another reason why news that China is now possibly a bigger economy than Japan does not shock me in any way.

Maybe that’s also why I prefer to vacation in rural or scenic areas, to “decompress” from the high stress, high octane life that is Shenzhen. But then again, people come here to ride that energy because it ultimately translates not only into job prospects but also business opportunities. 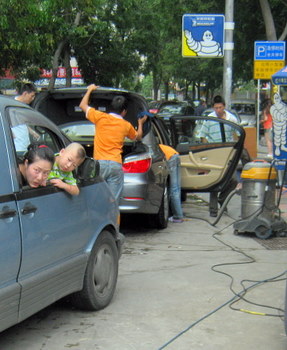 Clean Sweep: In the past decade, China has risen from 7th to 2nd place on the global economic totem pole. Photo: Andrew Vanburen
I mean, Shenzhen has one of China’s two major stock exchanges, and the country’s second biggest shipping port. And I can literally see Hong Kong from my house, and visit there regularly as well. So it’s hard not to get caught up in the rapidly flowing river of commerce and activity while living here.

To be frank, I think Shenzhen is way too crowded. But it’s also nice to be near an even more crowded city – Hong Kong, which I visit quite often.
But everything comes with a price, literally in some ways. By that I mean, how do you deal with the rising cost of living in such an economically successful city like Shenzhen?

Christy: It is difficult to save money here, I will admit. And it doesn’t help that I am on a teacher’s salary and also like to travel a lot. Luckily I have very, very nice parents!
However, my salary has trebled since I first began, so I shouldn’t complain too loudly.
Compared to the time when I was much younger, I would definitely say that the business climate here has improved drastically. But while there are a lot of new opportunities and chances to be rich, there are also a lot more various risks involved.
It seems like there are three types of financially successful people in Shenzhen.
Those that study and work hard all their life and have a very clear job description with a steadily increasing salary.
Those who suddenly rise into wealth, seemingly overnight, but it is not really that clear what they do for a living. I am guessing lucky investors?
And third are those who are very, very rich one day, without any particular warning. But they live way beyond their means and have no idea how to save – or tell true friends from users – and quickly return down to earth like the rest of us. 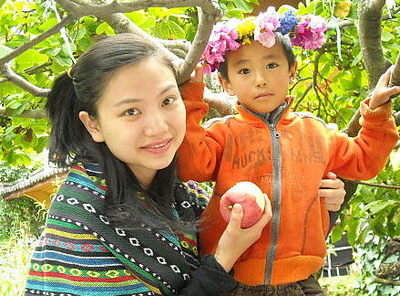 Far From The Madding Crowd: Christy Tsui in Xinjiang
I am guessing the second group makes a lot of money off the third, without the first group ever knowing a thing about it.

Do you think Shenzhen is a good model for how other cities should develop economically?

Christy: Yes, it’s a good model for Chinese cities. It’s a pioneer for sure.

Would you be happy to raise children here?

Christy: Yes, I think so. Apparently, Shenzhen is better than other mainland cities for that – with the exceptions of perhaps Shanghai and Beijing.

Finally, what would you tell would-be investors in Shenzhen companies, or Shenzhen-listed A shares?

Christy: Well, I would tell them to do what my family does – focus on blue chips and utility firms, and hope they keep expanding along with the economy.


Read about a frequent Shenzhen visitor with his head in the clouds: SHENZHEN EXPAT: Briton Walking On The Wild Side

We have 672 guests and 2 members online