TREK 2000: NextInsight readers get 3 hours' worth of insights 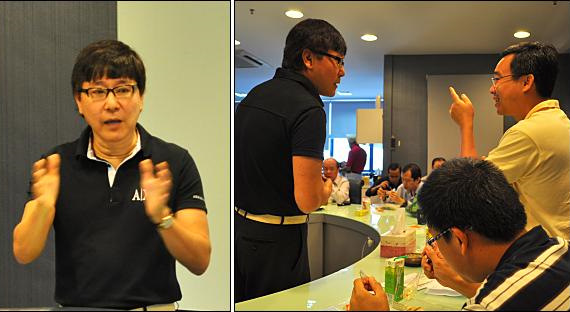 Henn Tan, an engaging speaker, met with 30 NextInsight readers for over 3 hours on Saturday, including product demonstration and lunch. In the photo, he is chatting with investor Francis Bong during lunch. Photo: Leong Chan Teik

The questions flowed from participants eager to understand the FluCard and Trek's business prospects. Trek is essentially a R&D company and has few comparables in Singapore. Its shareholders include Toshiba Corp (17.8%) and Creative Technology (9.3%). Photo: Leong Chan Teik 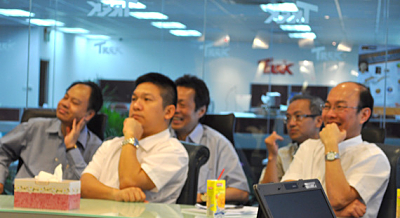 The audience enjoying Henn Tan's ('I'm a straight talker') quips as he spoke about matters such as how Trek, a small company, has to work with Japanese giants. Photo: Leong Chan Teik

The FluCard, a new invention of Trek 2000, may be exceptional in its attributes but can it be a commercial success?

Henn Tan, chairman and CEO of Trek 2000, gave his take on this matter to 30 NextInsight readers during their visit to the company’s HQ in Loyang Way on Saturday.

He began by noting that Toshiba Corporation, which has a 17.8% stake in Trek, is the co-chairman (with Trek) of a consortium of billion-dollar Japanese digital camera makers that is being formed to adopt the FluCard.

Toshiba is the largest manufacturer and supplier of SD (Secure Digital) cards in the world, with a 45-50% market share. And its product will be under threat from Trek's FluCard. 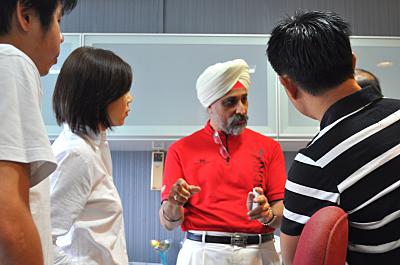 The SD card - which is a storage card in gadgets such as digital cameras and mobile phones - is, well, headed for demise because the FluCard not only has the same storage function but also Wi-Fi capabilities.

That is why Toshiba is embracing the FluCard, which can be used for transmitting photos wirelessly from one camera to another.

“With Toshiba endorsing my card, the chances of success are very high,” said Mr Tan.

There is a lot of work to be completed first, however. The FluCard itself is work-in-progress - for example, it can be made more user-friendly, as Mr Tan acknowledged.

Then there is the hard work of of getting the the camera makers' consortium to gel - after all, these big players are rivals in the marketplace, and there are standard specifications for the consortium to agree on to adopt for the FluCard. 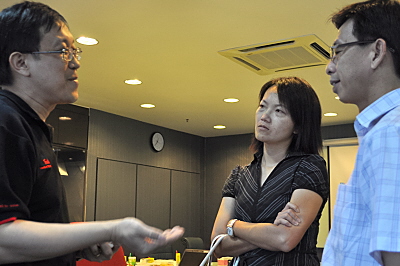 The good news to look out for: An announcement on the identities of the members of the consortium and “sometime in 1Q next year, barring unforeseen circumstances, those billion-dollar companies will announce that their products are embracing the FluCard,” said Mr Tan. "Just bear with us for a few more months."

Asked about the market size that the Toshiba consortium members command, he said it is about half of the 130 million digital cameras to be produced this year.

These are mid- to high-end cameras. And of course, there are potential buyers of the FluCard among the hundreds of millions of existing camera owners who can plug it in and play.

Before any investor gets carried away by these numbers, just note there is no way for Trek to meet such demand anytime soon.

And the Japanese consortium may not bundle the FluCard with every new camera model - it's a question of price, until the FluCard achieves economies of scale. 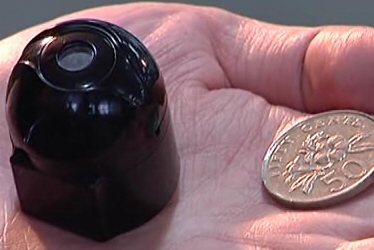 The i-Ball: For fun, security and a whole range of applications.

The FluCard is on sale at stores such as Challenger and Mustafa and at Trek’s website for US$180 a pair.

Aside from the FluCard, NextInsight readers were given a demonstration of another Trek invention - the i-Ball, a video camera compact enough to fit into (or hidden in) a fist.

It can transmit video images wirelessly (real-time) to devices a short distance away, such as digital cameras and i-Pads. Its applications are diverse and fun but, as Mr Tan said to much laughter from the audience, he has been told that it is also 'very dangerous' as it could come in handy for Peeping Toms!

More on this gadget in the weeks ahead .... 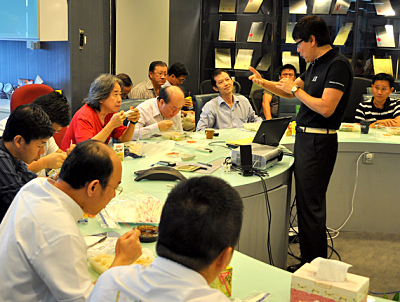 For more on the FluCard (and NextInsight's invitation to readers to visit Trek):

TERENCE WONG: How my stock picks have done

We have 235 guests and no members online