NextInsight went on a visit to Batam with a group of analysts recently to the shipyard of Otto Marine, which listed on the Singapore Exchange in Nov 2008. Otto Marine’s recent rights issue raised net proceeds of S$115.5 million that will be mostly utilised to expand its chartering fleet. The rights issue was oversubscribed at 109%.

Here are some key features and people that we encountered at its yard in Batam: 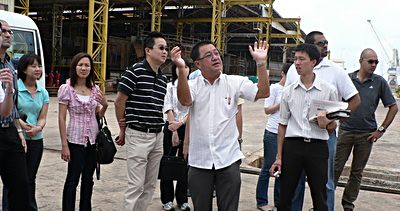 Tom Chua showing analysts around the shipyard.
Photo by Leong Chan TeikThe shipyard boss: Tom Chua, a Singaporean, has lived most of his last 13 years on Batam, overseeing the building of ships.

He is the general manager of PT Batamec, which is 95.222% owned by Otto Marine, which has a history in shipbuilding, ship repair and conversion dating back to the early 1980s when it established a shipyard in Tuas, Singapore. (The Tuas yard was divested in 2004).

Prior to PT Batamec, which Tom joined three years ago, he was running a neighbouring shipyard, Pan-United, where he spent 16 years. He started Pan-United as a greenfield project.

Earlier, he had stayed even longer at Keppel Corp -- 21 years.

Adding all that up, Tom has spent some 40 years in the shipbuilding industry. “Adding up the years, you will find that I’m just 35 years old!” he joked. Tom is actually 57.

Given his immense experience, he was once elected chairman of Batam Shipyard Associaton, which comprises over 30 shipyards, which lobby for benefits from the Indonesian authorities as well as make bulk purchases for materials such as steel plates for better prices. 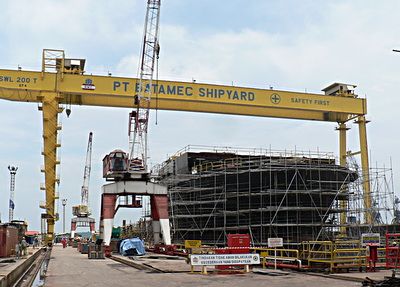 The PT Batamec yard. Photo by Leong Chan TeikThe shipyard: PT Batamec is nearly 30 years old, and in recent years Otto Marine has upped its stake in the yard to 95.222%, introducing a new management team which included Tom.

“You can see that the latest orders we have are for bigger anchor handlers and more sophisticated vessels. We are not competing with shipyards on Batam producing the smaller vessels.”

It has 950 direct employees, including 42 expatriates such as Tom. Sub-contractors and their workers total 2,500 on average. 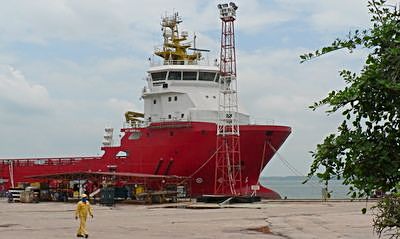 A Platform Supply Vessel built by Otto Marine is ready to undergo sea trial. Photo by Leong Chan TeikThe vessels: Along the wharf we saw several ships – the smaller ones - which Otto Marine had outsourced the building to nine shipyards in China in order to free up the PT Batamec to focus on the bigger vessels.

After they were built in China, the outsourced vessels had journeyed to PT Batamec for equipment to be fitted out.

We missed by a day the delivery of a 10,800 horsepower vessel, an Anchor Handling Tug Supply (AHTS) vessel which is the last in a series of 10 vessels built for RK Offshore.

A PSV (platform supply vessel, for transporting goods and personnel to and from offshore oil platforms) was ready for sea trial, the first in its series.

It is one of the higher bhp (brake horse power) offshore vessels that Batamec specialises in.

In all, Otto Marine is in the midst of building 14 ships currently – largely for Norwegian clients.

Otto Marine has an outstanding order book of US$646 million as at end-June this year, comprising mainly newbuild anchor handling tug supply vessels, with deliveries stretching through 2011. 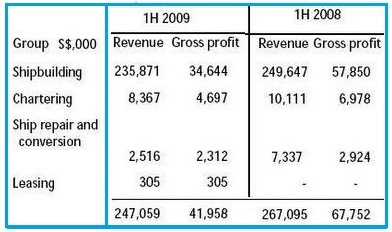 Otto Marine 1H performance.Contract values range between US$15 million to US$150 million per vessel.

An interesting vessel is the US$145 million turnkey contract from a Norwegian client for a 105-metre offshore construction vessel scheduled for delivery in 2011.

It’s about nine months into a two-year delivery timeline.

The self-propelled, DP3 vessel is equipped with remotely operated vehicle and will be capable of installing subsea wellheads and top drill operations in deep-water.

The average day rate for such a vessel is estimated at below US$200,000.

”One of the reasons the client chose us is because we have an in-house engineering team run by a Singapore naval architect. You don’t find it in most yards in Batam and even in Singapore,” said Tom.

The team is trained to operate software for building precise virtual models of vessels which can be reviewed and tested prior to production.

We have 964 guests and 2 members online