a. Speed of reaching settlement agreement

GSS announced the termination of the cooperative agreement between KUD and PT CSE on 24 Jul 2015. Recall that GSS first acquired 53.68% of the issued share capital of PT CSE from JPEL on 10 Sep 2014, partly on the basis that PT CSE would be able to participate in the oil extraction services business in Dandangilo-Wonocolo oil fields.

b. Outcome may be favorable in the long run

On 10 Sep 2014, when GSS commenced its S$48m acquisition by acquiring 53.68% of issued share capital in PT CSE, PT CSE had the rights to only extract oil from Dandangilo-Wonocolo and Tungkul oil fields. However, after the settlement agreement on 17 Aug 2015, GSS paid S$15m and acquired 100% of issued share capital in PT CSE which has the rights to extract oil from Tungkul, Kawengan, Trembul and Gabus. As a result, the outcome might be favorable in the long run.

c. Part of the S$32.9m impairment provision may be written back

According to RHB, Pertamina cancelled the agreement with KUD due to the latter’s non-compliance with contract terms. This cancellation does not affect GSS’ other four fields as these are contracted with state government corporations (“BUMDs”).

GSS’ net asset value (“NAV”) per share is around $0.089 with a price to book of approximately 0.9x. It is noteworthy that GSS' average price to book for the past five years was around 1.7x. Furthermore, GSS’ NAV / share may increase in the future given the following factors:

a. Cancellation of 76m consideration shares

Pursuant to the settlement agreement with JPEL, 76m shares will be cancelled by way of capital reduction. Thus, GSS’ number of outstanding shares will decrease from 472.6m shares to 396.6m shares. This should have a positive impact on its earnings per share and NAV / share.

b. One-off gain amounting to S$6m from relocation land sales

According to the management, there is likely to be an approximate non-recurring RMB27m gain (translating to around S$6m) due to relocation land sales in China. My guess is that it is likely to be recognised in FY16.

c. Possibility of some impairment provision being written back

As I mentioned above, part of the S$32.9m impairment provision may be written back. (See point 1c above)

Precision engineering (“PE”) has been GSS’ core business for decades. According to RHB, Nextinsight and based on company’s financial statements, GSS’ PE business seems to have gained traction with 1HFY15 net profit hitting S$3.1m vs S$2.0m in FY14.

This segment is likely to be the bright spot in the next couple of years as, firstly, GSS has taken on new products with good margins. Secondly, it has retired products which have reached the tail end of the product cycle where such products typically have lower margins. Thirdly, company has exercised cost management and increased automation, which are likely to have helped margins.

In addition, GSS has clinched a new customer to supply machined parts for its game console, commencing in the later part of FY16. A more significant impact may be felt in FY17F.

According to RHB, GSS current valuations seem to ascribe zero value to its oil business if a reasonable multiple is given to its PE business. It is also noteworthy that GSS is in a net cash position. The oil business segment may have positive surprises in the next few months if management can execute on the following:

GSS is working to convert one of its fields to a KSO arrangement. At current oil prices, management feels it makes more economic sense as KSO allows full cost recovery. According to RHB, the KSO arrangement typically spans 20 – 30 years and it allows all economically recoverable reserves to be recorded as reserves.

On 2 Jun 2015, GSS inked an agreement with AFCO Energy Pte Ltd to invest into a joint venture company for the marketing and distribution of mineral oil and crude oil products and related businesses in Indonesia. GSS’ role is akin to a broker who originates trades. AFCO’s role is its reputation, financial strength, expertise in the storage and distribution of oil and oil related business. Management expects GSS – AFCO oil trading business to commence this year.

On 19 May 2015, GSS gained access to oil and gas concessions in Sumatra by investing US$5m investment in Ramba’s Energy’s drilling operations at West Jambi block. GSS gains exposure to a new geographical location where it previously had no exposure.

1. Confidence in GSS shattered due to a series of events

Firstly, with hindsight, GSS' acquisition of PT CSE was ill-timed as oil price has halved since Sep 2014. Secondly, one of the attractive points in GSS was its average selling price of oil, which was supposed to be fixed annually by Pertamina. However, in view of the plunging oil price, Pertamina amended the fixed price arrangement to market price. Thirdly, the sudden termination of the agreement between KUD and Pertamina was another negative shock which reduced (yet again) the market’s confidence in GSS. Sentiment and confidence in GSS’ management and business are likely to take some time to recover.

2. Exposure to one of the unloved industries at the moment

GSS’ exposure to the oil industry, one of the most unloved industries (besides commodities), is unlikely to help its sagging share price. Nevertheless, according to World Bank, IMF and EIU, oil price is likely to bottom in 2015. (See Chart 1 below) 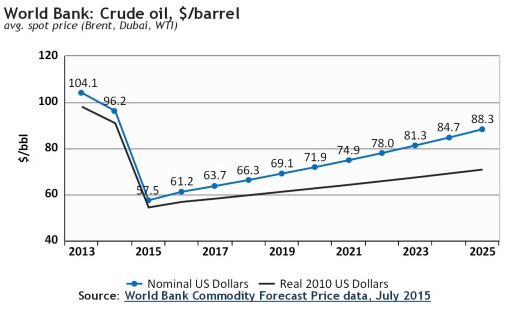 In order for GSS' share price to re-rate, we have to see that it clinches its 1st KSO, commencement of its GSS – AFCO oil trading venture, positive news on West Jambi block and continued strength in its PE business.

Readers can refer to GSS’ corporate website http://www.gssenergy.com.sg/ for more information. Together with this write-up, I will be sending RHB latest GSS’ research report. Readers who want the research report can sign up on http://ernest15percent.com so as to be included in my mailing list. However, this reader’s mailing list has a one or two day lag time as I will (naturally) send information to my clients first.

We have 1510 guests and no members online