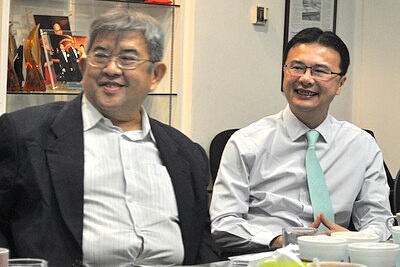 (L-R): GSS Energy CFO Ng Say Tiong and Group CEO Sydney Yeung. Photo by Leong Chan TeikThe reason for the termination was made known at a 1H2015 results briefing last week: The village cooperative (which had engaged GSS Energy unit Cepu Sakti as the production contractor) had been engaged in illegal activities.

Pertamina had issued the village cooperative several warnings in the past.With the termination, the cooperative in turn cancelled production services that several contractors, including Cepu Sakti, had been providing in the Dandangilo-Wonocolo and Ngrayong Fields in East Java.

GSS Energy and PT Java Petral Energy (which sold a 53.7% stake in Cepu Sakti to GSS Energy last year) have recently worked out a settlement, whose terms include:

GSS Energy took a one-off impairment provision of $32.9 million on Cepu Sakti as result of the termination, resulting in a net loss of S$33.3 million at the group level in 1H2015.

GSS Energy has four other oilfields (under Cepu Sakti) in Indonesia which it is trying to convert from the previous arrangement (under the so-called 'old wells' programme) to a production-sharing cooperation (PSC), or KSO in Bahasa Indonesia.

Under a KSO with Pertamina, production costs can be recovered from the subsequent sale of oil, GSS Energy can drill deeper, and the production contracts would be far longer at 20-30 years. 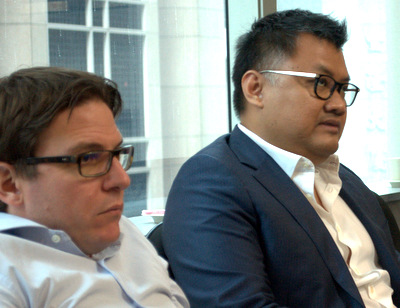 (L-R):  Valentin Schillo (GSS Energy deputy CFO) | Suyulianto Badung Tariono (Director of Business Development, GSS Energy). Photo by Leong Chan TeikIn the oil & gas segment, GSS Energy is carrying on with another project of drilling two oil wells in West Jambi, which is expected to be completed by year-end. This is under an agreement with Ramba Energy.

To that end, GSS Energy has recently hired a veteran, Suyulianto Badung Tariono, as its Director of Business Development. He is said to be very well connected.

A third development in the oil & gas space to watch is the start of trading by the GSS-AFCO joint venture in the marketing and distribution of mineral oil and crude products and related businesses in Indonesia.

GSS Energy acts as an agency originating trades, while AFCO brings to the table its profitable track record and its financial muscle as it has large credit lines.

We have 1014 guests and no members online