This is an edited version of the post by Cheong Si Sien aka Divads27 in our NextInsight forum.

THIS WAS my first time attending Hafary Holdings’ AGM. I met a friendly and cheerful CEO, Mr Eric Low, and the rest of the directors.

The standard procedures of approving the resolutions stated in the Notice of AGM were carried out and passed without objection, except for the resolution pertaining to the performance share plan.

A shareholder expressed his opinion that the plan was too vague.

But the resolution was passed with no objection.

The resolution which I think everyone was looking forward to was to approve the final dividend of 2.5 cents which, based on the closing share price of 22 cents on the day, gave a yield of more than 11%.
During the Q&A session, a private investor introduced himself as someone who invested in bonds and shares and was a new investor in Hafary. He posted some relevant and interesting questions.

The CEO, Mr Eric Low, was ever so friendly and patient in answering them. 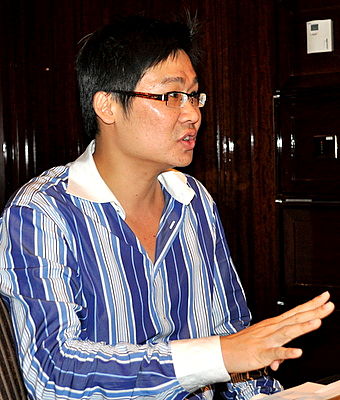 Eric Low, CEO of Hafary Holdings. NextInsight file photo
Here is the essence of the session:
Q: What is the outlook for the company especially in the project segment?
A: For the next 2 to 3 years, the outlook for construction is positive and will benefit Hafary. The contribution from HDB projects (supplying tiles to HDB's Build-To-Order projects) will gain momentum as HDB goes full steam ahead with building of flats. Currently HDB projects constitute 10 to 20% of the total revenue from Hafary's project segment.

Q: Is Hafary the number one tiles providers in Singapore?
A: YES, was the simple answer from a smiling Mr Eric Low. He estimated the market share to be about 20 to 30% locally.
Q: Can you elaborate on the 18 Sungei Kadut St 2  International Furniture Park project?
A: Two main purposes for this acquisition. First, it is to secure the property for setting up of a warehouse to replace the one in Defu Lane as the latter's lease is expiring soon.
Secondly, working with listed company Sitra to venture into other areas of the furnishing industry as stated in an announcement on SGX website.

Q: What is the percentage of revenue from new products other than tiles?

A: Currently, the revenue from new products other than tiles, eg: sanitary products, marble etc. forms 5 to 10% of total revenue. The company will tap on its pool of over 1,000 loyal designers and contractors to grow the revenue from non-tile products.
Q: Are you concerned over your high inventory?

A: The company carries 6 months worth of inventory. The high inventory is due to an increase in business. For example, Hafary stocked up on marbles as its is venturing into the marble segment and there are increases in HDB BTO projects which require tiles. Mr Eric Low said high inventory is in fact a good sign as it means the company is expanding. 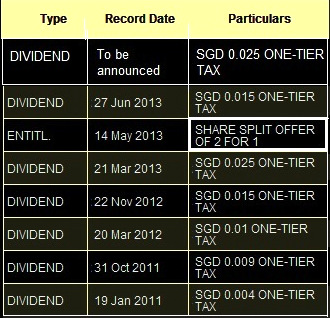 Hafary's dividend track record.... note that the upcoming final dividend of 2.5 cents comes after a stock split. In other words, investors who bought in pre-split would effectively be receiving 5 cents a share as final dividend.Q: Can the high dividend be sustained?

Mr Low seems confident, and he referred to the company’s good track record of dividends for the past few years. FY13 dividends came mostly from the gain from the sale of the Aljunied property.

Subsequent years’ dividend will be 20 to 30% of the profit of the group's operating business. As for divestment of properties at hand, the company has no plan to do that yet.

I think with HDB building more flats in the 3 new towns, Punggol Matilda, Tampines North and the new centrally-located estate of Bidadari, I think the profit of Hafary should surprise on the upside.

The CEO mentioned HDB contribute around 10-20% of the revenue for project segment. So there is plenty of room for revenue to grow for the HDB project.

He seems confident of the prospect for the next 2 to 3 years. After that, the company has to depend on how well the construction sector performs.
Q: Will the company suffer more losses from the China operation?

I left the AGM hopeful of the next 2 to 3 years. As for what lies after that, only time will tell.

We have 870 guests and no members online