Property investments are not always winning ones. This may sound alien to less-seasoned investors who have only seen prices go up in the last couple of years. But the government has laid on intense cooling measures targeted at the property market. Interest rates can only rise in the coming years. Whither the property cycle? Here, a reader shares his loss-making experience as a first-time property owner.


MY FIRST foray into the property market was the purchase of an HDB flat in year 2000. There weren't any HDB grants during my time and we couldn't afford a flat near our parents as we had only started working.

We couldn't afford the Executive Condo either. My starting pay was only $1,850 per month to be exact.

There were only 3 choices of location -- Woodlands, Jurong or Sengkang. Not much of a choice, so we selected the "cheapest" location in the north as Sengkang was much more expensive.
The problem with picking the north zone was that it was very far from our parents' place. Once the baby came, we had to move near to the care-givers.

In the end, we hardly stayed in our executive flat which cost $380,000. The problem was that under HDB rules, we could not buy any property within 5 years and could not lease out our home either. The rules were extremely strict. In the end, we kept it empty for almost 5 years. To top our stupidity, we spent $40k on renovations.

The chart shows you we bought exactly at the peak of the market cycle and sold at the bottom. What "perfect timing"! 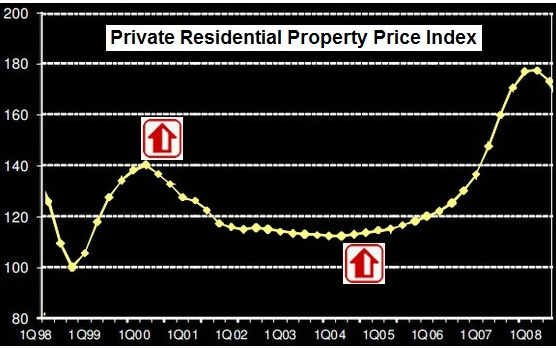 Lesson 1 - Buy a property only if you intend to stay in it or rent it out.

We couldn't stay in it and we couldn't rent it out due to the rules. It was basically a white elephant. We could have 'secretly' rented it out but it was illegal to do so.
Having said that, if you own a HDB flat today and are eligible to rent it out, my advice is that you keep the goose that lays the golden egg unless the offer is too compelling and you have better use for the proceeds. The yield from HDB flat is one of the best you can find.

The fact that I could not buy another property or sell within 5 years were restrictions imposed to ensure that we did not abuse the "market subsidy"which we supposedly received when we bought the HDB executive flat.
Lesson 3 - Don't be greedy when buying HDB flat! 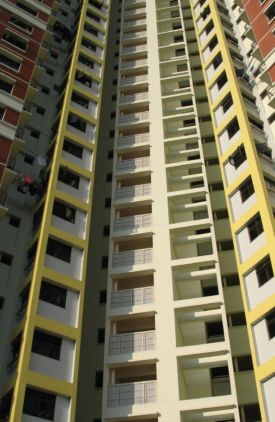 "It took me more than 10 months to find a buyer and the buyer was a PR family which offered me $295k for my flat."
Photo: Internet It was very funny to see the reactions of people when I told them I lost money on my HDB flat. They couldn't believe it. I have to tell you that I was greedy. I thought to myself, "HDB sure can make money if you buy directly from them".
I could not be more wrong. Hahaha. I bought the biggest flat available to us instead of 4- or 5-room flats and as you know, executive flat received the lowest "market subsidies" from the government.

It took me more than 10 months to find a buyer and the buyer was a PR family which offered me $295k for my flat.

The real joke was HDB wrote a letter to me, wanting an explanation from me why i sold my flat for $295k when the valuation was $340k. I gladly replied that I would love to sell it to them for $340k if they were willing to buy. (As a side note, my brother-in-law bought a 4 room flat in Sengkang and after 5 years, sold it for a good profit).

Lesson 4 - Cut loss and move on

By 2005, I had lost enough money from the stock market to know how to cut loss and learn about market cycles. I wanted to free up my CPF savings to buy properties in better locations and catch the next property cycle. The fact that I didn't even live in my  flat and couldn't rent it out provided the catalyst for me to do something about it.
As you can see,my first foray into the property market is a painful one. Lost at least $100k if I include part of the renovations. Sigh.

It was a painful lesson which I will never forget but I will treat the $100k as an expensive school fees. There are no better schools to teach you about what life really is.


Epilogue: The fortunate thing is we didn't have to top up the "CPF losses" suffered from the sale but there wasn't much money left anyway. :-) The loss almost wiped out our CPF accounts and we each had a couple tens of thousands left.

We had been working for more than 8 years and had been diligently saving up but the combined amount wasn't fantastic -- probably around $100k. Coupled with the remaining $50,000 in the CPF, we had a capital of $150,000 to buy the next property.


This article was first published on a blog, 2Y Real Estate Fund, and is edited and republished with permission.

12
-1 #13 Nybluedog 2014-01-29 13:18
I can identify with what the author is saying in essence. That is to unlock capital gains or equity ( if sold at a loss) his properties to purchase another better property that has better capital gains potential. It is akin to hopping off a tricycle ( hdb ) when he could, and was financially able to hop onto the bus ( city square condo) which helped him move ahead faster. Then he subsequently changed modes of transport before landing on the maglev ( landed property) which could get him ahead of the crowd, with its breakneck speed ( of capital appreciation ).
Quote
0 #12 Jolphine 2013-12-10 12:15
***My Point of view may not be your point of view ***

1. He purchased a HDB which he himself cant afford . An Executive hdb with a price tag of $380K with a monthly pay of $1,850 . which means his monthly installment will be $1,369.16 per mth . if he did not stay he can always seek approval from HDB to rent it or rent out a room to reduce the loan.

Looks Mr IPO has not learn his lesion. He will “Buying High” as what Greenrookie point out.
Quote
0 #9 Shivakkumar 2013-09-01 18:26
This article highlights the fact that ppl can lose money because of regulations. My personal view is that hdb is overly regulated and whenever there is imbalance, more regulations are implemented. And as you know, there is a huge time lag from the moment the problem is identified to the time the regulation takes effect. Perhaps hdb should be driven primarily by market forces of demand n supply rather than policy makers.
Quote
-1 #8 Tan Peng Hock 2013-09-01 08:23
I think this reminds some that property is not risk free sure win investment even in Sg. Today i read ST classified. Some are selling their hdb under valuation.
Quote
0 #7 breeze 2013-09-01 07:34
Well said greenrookie.
Quote
0 #6 6774 2013-08-31 15:54
If the capital gain is more than the otherwise capital gain from old property plus 100k, that's a fine sell low but low strategy. But it the sole house, so even the capital gain is more, u can't monetatized it. U still need a roof over your head. So u sell high and buy high, or u rent. Unless u can bunk in with someone, the sole property is still not an investment, it might act as an insurance of last resort. But the author is talking about making gains like its a investment tool, rent, flipping it etc. worse, I am not sure when the article is written, if the sold at a loss and is looking for a unit now, chances are very high that they will repeat the mistake of "buying High", even with tapering, interst rate will only raise to "normal " rate at 2015 earliest, any significant fall in price should take place 2015.
Quote
0 #5 Liz 2013-08-31 13:06
Greenrookie's point "no one cut loss for the sole house, esp at a loss" is not always applicable. I for one sold my home at a loss of $xxxK, and upgraded to a bigger property. It was a case of sell low, buy low. Years on, and my home has fetched a much higher capital gain than the first one has (accruing to my buyer).
Quote
0 #4 CC Low 2013-08-31 09:02
I agree with the comments above, particularly Greenrookie's which contained valuable insights. When buying a property (immovable asset) one must first consider whether he is buying it to be used as a home or for investment purposes. The criteria between the two would be quite different because the intention is different.

Secondly, when purchasing such property, there is also a need to differentiate between HDB and private properties. Although it has been claimed by the government that purchasers of HDB flats are owners, in actual fact, what they are holding onto is a piece of paper which allows them a long term rental of 99 years with rental being paid in advance. That piece of paper is called a Deed of Assignment ; whereas in the case of a private property the purchasers are real and legal owners of such properties because they are issued a Subsidiary Strata Title (in the case of condo or flat units) or a certificate of (land) title (in the case of landed properties.

A deed of assignment has got not much value in the secondary market because they are unlikely to be accepted by bank for third party mortgages, or even for collaterised loans by the owner himself. Subsidiary strata and land title certificates allow owners the availability to access financial recourse through collaterised mortgages, whether by the owners themselves or for third parties. There is therefore, the aspect of availability of access to liquidity which differentiates HDB from private properties.
Quote
12
Refresh comments list
NextInsight.net

We have 1117 guests and no members online