CHINA MARKET: Why 2013 Will Be Better 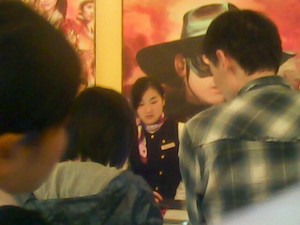 Like a blockbuster Hollywood hit, Chinese are eagerly lining up to wait for the next big splash in the country's stock markets.
Photo: Andrew Vanburen

THE YEAR OF THE DRAGON is drawing to a close, and Chinese investors are all too happy to greet the next cycle – the Snake Year – which begins on February 10.

The year 2013 will be a better year for several reasons.

For most of 2012, there was very little to smile about regarding the performance of China’s A-share markets in Shanghai and Shenzhen.

After flirting with the 2,500 level this May, the benchmark Shanghai Composite Index has been in virtual freefall mode ever since, reaching a near-term low of 1,949 in early December.

But this month has been a different story altogether, with the Index rising nearly 13% since the final month of the calendar year began.

In fact, sentiment is such improved of late that investors jokingly refer to the 1,949 level in early December as “The Nation’s Second Founding,” a take on the establishment of the People’s Republic of China in the year 1949 after the end of the long civil war.

Whether or not this symbolic market “bottom” of 1,949 points is here to stay and won’t be challenged again is still a major unknown, but there is reason to be optimistic that its depths are virtually unassailable.

China’s current A-share slump can be compared to the capital markets of 1970s America.

The post-war boom following WWII was long over, and the Korean and Vietnamese conflicts had become part of history books.

The US, along with the entire industrialized world, were searching in vain for a new engine of growth to spur the sluggish global equity markets into a faster-expansion phase.

The US economy along with the leading GDPs of pre-EU Europe were sputtering in neutral, looking to gain traction, and still reeling from the oil crisis of 1973.

Winter has seriously warmed up Chinese shares, which have risen nearly 13% in December alone

The doldrums weren’t merely because the long-entrusted economic growth policies off Keynes were invalid or suddenly ineffective.

In actuality, the biggest hurdle to progress at the time was that people were no longer hungry.

Not hungry in a literal sense, with long bread lines and empty bellies.

But the West had reached a postwar boom and stagnation, and now individual countries were looking for new growth models to sustain and grow their collective prosperity.

People had enough to eat and drink, they were properly clothed and housed and the gap between rich and poor in the industrialized world was not as glaring at it is today.

This led to a gradual complacency, then a malaise, and finally – market inactivity and sluggishness.

Some big-picture economists at the time were saying that the industrialized world had amassed enough wealth and prosperity to reach a sustainable “Zero Growth” economic model, and could carry on as such for the foreseeable future without the need for constant stimuli.

The US stock markets apparently seemed to be taking the bait, and managed to stubbornly refuse to turn bullish despite a decade of relatively robust earnings results from listed enterprises.

In fact, it wasn’t until US shares as a whole slumped to an average P/E ratio of just seven times that the “true bottom” was reached and a sustainable bull run could begin in earnest.

It is clear that Chinese shares have seen a similar cyclicality, ridden the economic boom of the past three decades to soar sky high in the half-decade leading up to the Wall Street Crash in 2008.

But since then, A-shares have been some of the world's worst performers and a new growth story is desperately needed to be narrated.

So when China’s overall P/E ratio recently slumped into this Brave New World territory, financial journalists collectively asked: “Just 7x? So where are the funds?”

CCTV and other major media outlets recently asked several fund managers how they could avoid the temptation of such a depressed market, and the answers they received were very revealing.

A noteworthy number of money managers say they had already jumped back into the market, head first in many cases, when the all-important P/E level sunk below 9x.

And now that it is flirting with 7x, these same fund managers are spending most of their time apologizing to clients for their premature entry, and doing everything in their power to keep unhappy investors on the books with better returns elsewhere.

Thanks to a red-hot December – at least as far as local equity prices are concerned – P/Es are rising and so is general interest in the A-share markets once again.

Helping matters greatly was a recent report in the China Securities Journal saying the National Social Security Fund had issued funds to fund managers who successfully applied to manage the larger allocation.

The same report also stated Guangdong Province’s social security authority had completed the allocation of 100 billion yuan for investment over the past three months.

With newfound funds, liquidity and the promise of more robust daily turnover days to come, it’s no wonder that things are looking up this month and beyond.

It’s hard to imagine that 2013 could be worse than this year -- which is mercifully drawing to a close.

We have 585 guests and no members online