This article was recently published on Ernest Lim's blog http://www.ernestlim15.blogspot.com/ and is reproduced with permission 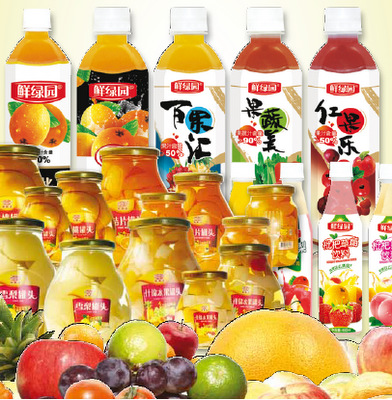 Fruit beverages and canned fruits for the domestic market are the growth drivers of Sino Grandness. Photo: annual report
MOST OF YOU would have heard of Mr Koh Wee Meng, Executive Chairman and CEO of Fragrance Group.

He joined the ranks of Singapore billionaires as shares of Fragrance Group doubled (including dividends) after Fragrance announced its intention to spin off its hotel assets via a separate listing on 15 Aug 2011.

A company that may follow Fragrance’s footsteps is Sino Grandness.

Through its wholly-owned subsidiary Garden Fresh, Sino Grandness has issued two tranches of zero coupon convertible bonds (“CBs”) worth a total of RMB370m.

These offer the bond holders an option to convert the bonds into shares of Garden Fresh should Garden Fresh be listed.

The potential spin-off aside, there seems to be more positive developments since my write-up on 18 Apr 2012.

Sino Grandness announced that its wholly-owned subsidiary Garden Fresh had issued RMB270m CB to Goldman Sachs and its co-investors.
According to management, before deciding to invest in Garden Fresh, Goldman Sachs appointed a Big Four auditor to audit Garden Fresh's business.

In addition, Goldman Sachs will appoint a representative to sit on Garden Fresh’s board of directors. The entry of Goldman Sachs does inspire some degree of confidence.

Since launching its beverage business in 2QFY10, Sino Grandness has made significant inroads into China’s burgeoning domestic market. Recently, Sino Grandness announced that it had expanded its network further to new locations such as Beijing and new channels such as 7-Eleven convenience stores.

Ernest's compilation
With reference to the table on the right, Sino Grandness posted a net profit of RMB140m in 1H12. However, we should not annualize 1HFY12 results because:

a)      One-off professional fees of around RMB7m to be incurred in 2H for the issuance of CBs to Goldman Sachs and its co-investors;
b)      Higher amortization of quarterly convertible bond expenses, as there are two CBs in place vs one previously;
c)      A&P expenses are likely to be higher in 2HFY12. However, overall expenses are likely to be kept around 6% of its beverage business sales;
d)     Product mix, especially the beverage segment, changes with the weather. For example, during summer (June to end-August), consumers tend to drink less concentrated beverage juices (i.e. more water content) than during cold seasons. Typically, more concentrated beverage juices command slightly higher margins.


Notwithstanding the above factors, 2H is usually a stronger season for its export business. Consequently, barring any deterioration in the company’s fundamentals, Sino Grandness should be able to comfortably meet or (likely) to exceed analysts’ estimates.

During its 4QFY11 results briefing, Sino Grandness mentioned that it would be launching in-house branded products (i.e. domestic canned products) in 2012. This took off surprisingly well.
In 2QFY12, this segment contributed RMB38.2m of revenue in 2QFY12 vs RMB1.3m in 2QFY11.

The company has been active in the investor relation front. It frequently gives presentations and talks at brokerage houses. It also hosts regular plant tours for fund managers and analysts.
The company would be presenting next at UOB Kayhian Regional Consumer Corporate Day 10-11 Oct.

If Garden Fresh can meet the benchmark of RMB 140m and RMB250m in net profit in FY12F and FY13F, respectively, then the CB holders are likely to convert their CBs into shares of Garden Fresh based on a market value of RMB1.5b for Garden Fresh.
According to management, the beverage business commands a net margin of around 18%.

1HFY12 beverage revenue was around RMB392m, thus its net profit is likely to be around RMB70m. With more locations and channels for the beverage business, it is likely to reach the benchmark of RMB140m this year.

If Garden Fresh fails to achieve at least RMB80m net profit in FY2012, it constitutes a default for CB holders and they can redeem their CBs.

However, this situation is unlikely to materialize given the strong performance of its beverage business in 1HFY12 (Refer to point 1 above).

3. Cash intensive business -- May distribute little dividends, if any

Sino Grandness, given its current high growth phase, is likely to distribute very little dividends, if any. It did not distribute dividends in FY11. 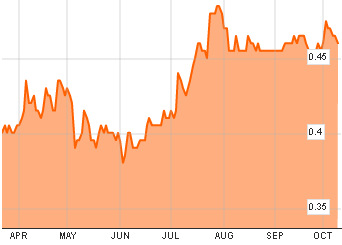 Sino Grandness has a market cap of S$123 million and does not pay a dividend. Chart: Bloomberg
4. S-chip risk

Sino Grandness is still pretty liquid (vs other S chips) with its average 30D and 100D EMA volume amounting to 2.3m and 2.8m of shares, respectively.

According to Bloomberg, Sino Grandness trades at FY12F PE of 3x and FY13F PE of 2.1x.

It is likely that the market is waiting to see whether Sino Grandness can consistently deliver results.

The strongest re-rating catalyst is likely to be in 2HFY13 when it may commence work on the spin-off of its subsidiary.

* I had highlighted Sino Grandness to my clients on 2 Oct 12. Readers, please note that this is just an introduction on Sino Grandness. Feel free to email me at This email address is being protected from spambots. You need JavaScript enabled to view it. for analyst reports if you are interested to know more about Sino Grandness.

We have 2491 guests and no members online