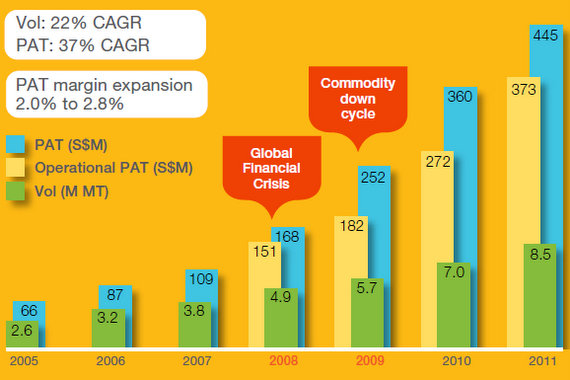 Olam has a track record of sustained growth across economic and commodity cycles. Source: annual report 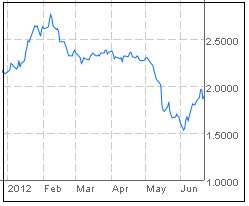 Olam stock closed at a high of $2.76 in Feb but has since lost a lot of ground.

Olam International: AMID SOME skepticism among investors regarding its prospects, its CEO has stepped into the market to buy 1 m shares for his own account.

A substantial shareholder, Kewalram Singapore Limited, has also made a 1-m share purchase on Monday followed by another 2 million shares on Tuesday, raising its stake to 20.21%.

To top it off, Olam also bought back its own shares on Monday and Tuesday: 2 million and 2.5 million, respectively.

With that, Olam's share buyback has now reached 42,196,000 shares in the short space of three weeks.

Olam will buy at a maximum of 105% of the average closing price of the last 5 market days at the time of acquisition.

All shares purchased may be held as treasury shares or cancelled.

Maybank Kim Eng Research cautioned that the share buyback is not necessarily a positive move -- Olam already has a net gearing of 189%, instead of being in a net cash position with idle money.

The brokerage has a sell rating on Olam shares with a target price of S$1.43.

On the other hand, DMG & Partners has a target price of $2.56, saying that Olam is buying back shares at P/Es close to the trough in Mar 2009, in the midst of the global financial crisis. 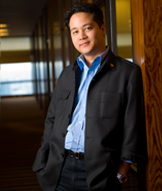 Samko Timber: As the company's operating results improved with each passing quarter, a substantial shareholder has been accumulating Samko shares.

Sampoerna Forestry -- which is owned by one of the richest families in Indonesia - now holds a 39.72% stake.

Samko's recent 1Q profit of Rp27.5 billion (about S$3.9 million) was the most profitable of the past five consecutive quarters of profitability.

We have 411 guests and no members online