How LUMIERE CAPITAL became top fund, what it is betting on 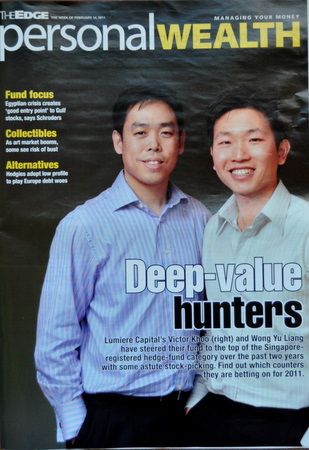 The Lumiere fund managers are featured in a 2-page report in The Edge Singapore, which sells for S$3.80 at the news stands.

LUMIERE CAPITAL is run by two 33-year-olds who were schoolmates at Nanyang Technological University and colleagues at defunct accounting firm Arthur Andersen.

Lumiere is featured in the current week‘s edition of The Edge Singapore for coming up tops in the Singapore-registered hedge fund category in 2009 and 2010, beating roughly 600-plus rivals.

Now, the fund which was co-founded in Oct 2007 by Victor Khoo and Wong Yu Liang, manages assets in excess of S$30 million, of which nearly half is their own money.

Lumiere began life with $1.25 million from each of the co-founders and money from 30 investors. In all, the starting assets were about $5 millon.

Soon after the fund's inception, the skies turned dark in 2008.

In 2010, the fund shifted its focus to HK-listed stocks, betting on counters such as jewellery retail chains Chow Sang Sang and Luk Fook as well as apparel company IT Ltd – all of which were bought at below 7 times earnings.

These three counters went on to become market darlings, trading at 17-25 times earnings, and were sold in late 2010.

The Edge Singapore reports that Lumiere also divested Osim, HTL and other Singapore-listed stocks, including Tiong Woon, KTL and Wing Tai after they surged to levels near their intrinsic value.

In their value-investing approach, Lumiere would estimate the long-term growth rates of companies in order to derive their intrinsic value.

“For a company with 15% to 20% growth over the long term, we would ascribe a fair PER of 12 times, based on current-year earnings,” explains Victor in the report.

They place on their radar screen companies that are under the radar of big institutional investors. “There isn’t much research coverage on the companies that we buy into. These are smaller companies that have yet to be discovered by other big investors,” explains Wong.

Other better-known names could be out-of-favour counters trading at low valuations owing to ‘special situations’, he adds.


NextInsight has stories on one of the companies mentioned above:

CHOW SANG SANG Has Gem Of A Half On Retail Strength

We have 1040 guests and one member online