TECHCOMP: Growth in 1H, much stronger 2H to come 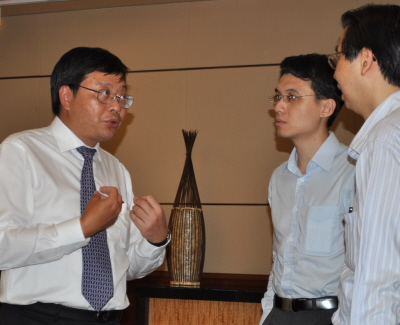 Doesn’t seem much in absolute figures, but seasoned followers of Techcomp would recognize that the 2H is seasonally much stronger for the company.

At a briefing for analysts, the management reiterated that it expects the 2H revenue to be more than 60% of the full-year’s.

And the 2H contribution to the bottomline would likely also follow the historical pattern. For example, in 2009, the second half contributed 81% of the full-year profit and 62% of the revenue.

The management including Richard Lo, the CEO, and Eric Chan, the executive director, shared insights into positive developments that would boost profit and revenue going forward:

* Techcomp’s two European businesses acquired in July 2009 and Feb 2010 would turn from loss-making to break-even by 4Q this year.  They had contributed US$6 m in revenue in 1H.

* Techcomp would recognize gains of US$600,000 in 2H from disposing of its joint venture with Bibby Scientific.

(To put the sum in perspective, Techcomp’s net profit in 2009 amounted to US$7.4 million.)

Here are some highlights from the Q&A session:

Q : You have increased inventory. Can you give us an idea of the orderbook? What kind of visibility do you have?

Richard Lo, CEO: We have not announced orderbooks in the past. Our customers normally start discussions with us nine months in advance. The visibility for orders is about six months – it’s 80-90% accurate. What I can say is I’m pleased with the progress and the 2H will contribute more than 60% of our annual turnover. 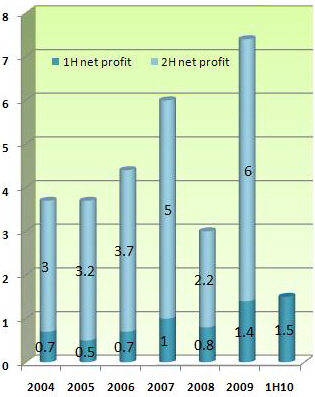 Q: How much losses did your European businesses suffer in 1H? Will FY10 still have a year-on-year growth in profit?

Gilbert Sin, CFO: On a monthly basis, our European businesses are improving. With this pace, we believe we will have a breakeven in 3Q this year and some profit in 4Q.

Mr Lo: The lower euro has helped sales of the European products in Asia with our intensive network in China and Asia. This is one of the first benefits for them. Their performance will be further enhanced when we shift their manufacturing of parts to China.

Q: Will FY10 still have a year-on-year growth in profit?

Q: Your admin expenses have jumped about 50% in 1H. How much of that is one-off in nature? 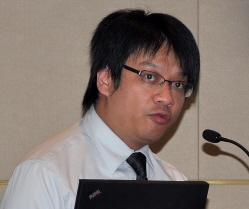 Mr Sin: Comparing our existing business in 2009 and this year, the increase in expenses was 10%.

On top of that, we had expenses incurred by our European businesses, including legal and due diligence fees for the acquisition amounting to US$150,000.

Q: Regarding the European business losses, what is the main reason for that?

The companies in Europe don’t have the economies of scale to go global. In past two years of recession, they were badly hurt. The smaller companies were always close to breakeven point, and they couldn’t get bank loans.

I believe we got very good deals in the 2 acquisitions. We paid Net Asset Value, including some intangible assets, but when we turn them around, their value would be 15-20X PE. 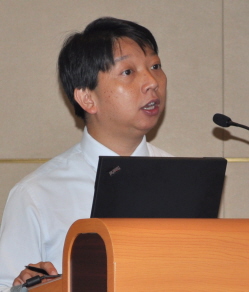 We convinced the owners to sell because we can provide working capital and help them bring down their cost of manufacturing by 20-30% by next year. They sold us 75% and 80% - the owners believe their remaining stakes would be worth more than what they sold to us.

Q:  I'm new to your company - why the seasonality in your business?

Mr Lo: About 60% of our business originates from the Chinese government’s budget, directly or indirectly.  70% of our business is from China where the government allocates funds twice a year.  In October, the allocation is 60-70%, so the last quarter is always the busiest for us.

We have 596 guests and no members online