Mr Diaz's appointment enhances the profile of TOTM, following its acquisition of the remaining 49.0% of InterBIO, making it a wholly-owned subsidiary.

Operating out of Indonesia where it has the distinction of having built the country's biometric ID system, InterBIO's stated mission is: To continually support Indonesia and its citizens to build the best-in-class biometric E-KTP national system in the world and to facilitate easy access for Indonesians to connect to multiple services with accurate, secure and proven technology.

Formerly known as Yinda Infocomm, TOTM had jettisoned its previous struggling business, renewed its board, and acquired an interest in InterBIO as an initial foundation to expand into the digital and biometric space -- not just in Indonesia but beyond.

TOTM's revenue is still small but its outlook is optimistic given its aggressive aggregation of technologies and partners in the past year. (See: TOTM TECHNOLOGIES: Is it an emerging AEM and global player?)

Key to its near-term future is the recently approved US$250m financing from the World Bank to Indonesia to, among other things, spur the use of biometric identification in government and commercial sectors.

Referring to the World Bank financing, a recent analyst report by SAC Capital looking at the impact on TOTM said: 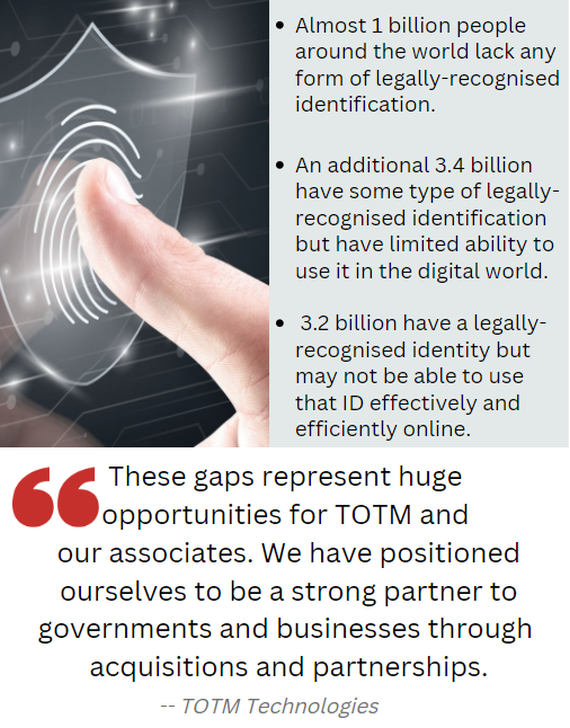 Aside from his political profile, Mr Diaz brings with him top industry experience:

See also: TOTM TECHNOLOGIES: Is it an emerging AEM and global player?

We have 1517 guests and no members online