REX INT'L: What made me sit up and take notice of it

The oil and gas industry underwent 7 years of famine from 2014 to 2020 as oil prices hovered around US$40/barrel. Such prices rendered the economics of certain oil fields unviable. 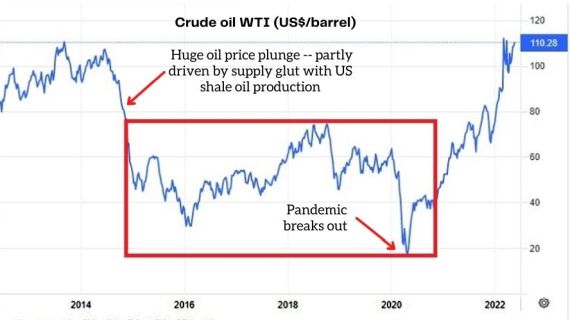 Since the beginning of 2022, crude oil West Texas Intermediate broke through the $80 resistance and is currently hovering around $120. The current high oil prices are due to a combination of demand and supply factors:

As business activities recovers from the depths of Covid-19, higher demand has led to higher oil prices. In addition, majority of world transportation modes continued to be powered by fossil fuels and the transition to renewables will take time.

Oil continues to suffer from structural undersupply due to under-investment in fossil fuel production in recent years as the world transits towards cleaner energy. This is exacerbated by the ongoing Russia-

Ukraine war which has caused further supply disruption to oil and its substitutes.

A more sustainable oil price would probably be below US$100. But let us analyze how much profits can Rex possibly make given the current high oil price environment and assuming both its fields continue oil and gas production?

In FY2020, the average selling price of oil sold by Rex was US$34 and this increased to US$67 in FY2021. FY2021 was also the year Rex turned profitable as an oil producer after several years in the red. As only the Yumna field in Oman was on the books of Rex in FY2020 and FY2021, we are able to deduce that the operating cost stayed consistent at about US$80K/day in those 2 years. In FY2021, Yumna field was producing an average of over 10,000 stb of oil per day.

While official operating figures are not available for Brage field, analysts such as Rystad had estimated a break-even cost of $47/barrel or approximately US$50,000/day. We also know that Rex revealed in a press release that had the transaction of Brage field been completed on 1 Jan 2021, “total revenue for FY2021 would have been approximately US$76.5mil higher and EBIDTA would have been approximately US$32.7mil higher”. Recall that this was when average oil prices was at US$67/barrel while oil prices are currently at the US$120 mark.

Yumna field only achieved first oil in Year 2020, so it is a very young field with potential for more to be extracted. According to the in-house Qualified Person report, 1P+2P reserves net to Rex is a total of 6.2MM stb from Yumna field.

That might not seem a lot as aforementioned, Yumna already produced 5.7MM stb from achieving first oil to end 2021. However, note that these numbers were applicable only to Yumna Field. A report released in 2012 by Aker Geo cited that the entire Block 50 had 4 billion barrels of unrisked prospective resources as shown in Diagram 3.

While Brage field is very mature with some 21.5 mmboe of remaining reserves, it is still at an investment phase involving continuous drilling operations. Let’s also not forget that Lime Petroleum AS is an active explorer in the Norwegian continental shelf and own 3 discovery assets with commercial development potential.

In the even longer term and if things pan out well, it may also be able to achieve production in the 2 PSCs in offshore Malaysia. 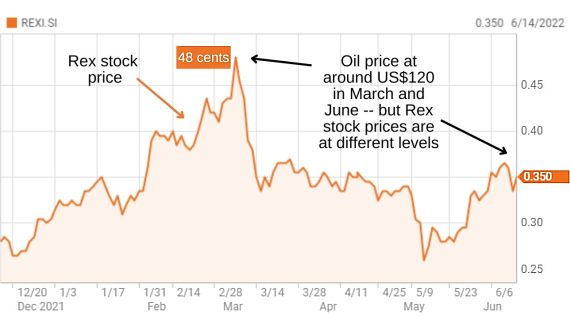 "It was precisely this divergence that made me sit up and take notice as I wondered what was amiss here."

For a period of time from Dec 2021 to Mar 2022, the share price of Rex was tracking the prices of crude oil quite closely.

However, after its share price hit a high of 48 cents in Mar, it has since declined gradually to 26 cents before rebounding back to 36 cents.

Meanwhile, WTI crude continues to remain within the range of US$100 to US$120. It was precisely this divergence that made me sit up and take notice as I wondered what was amiss here.

Management who are also shareholders accounts for 42% of the total outstanding shares. This represents a strong alignment of Management’s interest with minority shareholders.

Companies in this sector are generally known to take on leverage to juice up their returns and we need to look no further than Ezion, Swiber etc. Therefore, it is a huge positive that Rex is actually in a net cash position to the tune of US$5mil as at 31 Dec 2021. This is despite raising the NOK500 mil bond to acquire Brage Field. Such a strong balance sheet gives Rex dry powder to target more attractive investments.

The risk of a languishing share price is that it can remain low for a very long time and represent a value trap. Even though a share buyback mandate has been approved at the EGM, it has not been utilised yet. Such development is much to the frustration of some shareholders who have been voicing their displeasure on online forums such as sharejunction and directly to its investor relations team.

The fact that Rex only has 2 production sites meant that its earnings is always vulnerable to any production disruption.

Unfortunately, production at Yumna field was shut for 24 days between Feb and Mar 2022 to change the floating storage tanker. This was further exacerbated by the upgrade of the production facilities and change-out of Mobile Offshore Production Unit in April. As a result, average monthly production between Feb- Apr 2022 was only 2,715 stb/day, a far cry from the 7,518 stb/day in Jan 2022. This drastic fall in production and lack of diversification will definitely impact its 1H2022 financial report and I believe this is the main reason why its share price had fallen since March.

The good news is that these upgrading and replacement works at Yumna field have all been planned beforehand and will lead to higher production output in the mid to long-term.

There is also ongoing claim against two of Rex’s subsidiaries in Oman. Rex have assessed that there will be no material financial impact from the claim.

After reviewing Rex International as a possible equity investment option, I am patient enough to give it time for its share price to converge to the trend of WTI crude. That is why I have initiated a position in Rex and consider this as one of the counters alongside the likes of Bumitama, Wilmar, Geo Energy and Uni-Asia in my portfolio to ride the surge in commodity prices.

We have 430 guests and no members online