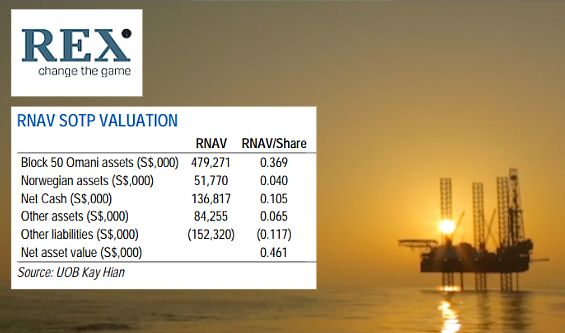 WHAT’S NEW
• Positive industry tailwinds and robust 1H21 earnings. As more countries complete their vaccination mandates and reopen their economies, this should help sustain oil demand and support Brent oil price, which has increased by around 60% ytd.

Rex International Holding (Rex) reported robust 1H21 results as production from Oman has ramped up, supported by a yoy increase in oil price and oil liftings. 1H21 revenue beat our expectations as averaged realised oil price sold increased to S$62/bbl in 1H21 from S$23/bbl in 1H20. Also, about US$58m revenue from July and August liftings was recognised in 1H21, reflected under trade receivables.

We estimate this would provide an estimated US$40m boost to Rex’s cash war chest. With two additional production wells, production volumes have increased to 11,000 bbl/day.

STOCK IMPACT
• Norway poised to be the next Oman. As production volumes from producing oil fields tend to naturally soften over time, Rex’s 33.8% acquisition of producing Brage field for US$42.6m would help boost overall production volumes by 3,440 bbl/day upon approval.

In order to fund the acquisition, Rex has successfully raised a US$60m secured bond. We expect approval to be obtained by end-Oct 21 or early-Nov 21.

Once approved, the effective transaction date would be 1 Jan 21, implying that revenue generated since then would be retrospectively incorporated to Rex’s overall 2021 revenue. Additionally, Rex owns interests in several discovery assets (PL1125 Falk, PL433 Fogelberg, PL838 Shrek) that may move into production in the coming years.

The addition of the Brage field would add an estimated net 2P reserves of 7.3mmboe to current 2C contingent resources of 27.7mmboe from the three discovery assets. Rex has also participated in the exploratory drilling of the Fat Canyon Prospect on 29 September. If successful, it would boost Rex’s Norwegian portfolio moving forward.

• Beneficial tailwinds for production than divestment. As global economies start to reopen and oil price continues its uptrend, we reckon Rex would not divest exploration assets it did in 2019 with the US$45m sale of the Rolvsnes discovery asset. We estimate the price per barrel sold during the Rolvsnes sale at US$3.20-5.00/bbl.

With oil price having largely recovered to near pre-COVID-19 19 levels, we reckon it would be more profitable for Rex to develop these assets into production rather than divesting them. Furthermore, Rex would receive tax rebates of 70-78% of exploration costs from the Norwegian government. Thus, based on the favourable tailwinds, we expect Rex to develop these assets further into production moving forward.

We estimate the resources of both Diwangsa and Rhu-Ara to be 20-30mmboe, double the size of the Yumna oil field in Oman. Rex owns a 95% participating interest and would leverage on its experience in Oman to develop these assets into production moving forward.

VALUATION/RECOMMENDATION
• Maintain BUY with a higher SOTP-based target price of S$0.46 (S$0.30), based on 1.0x 2021F RNAV and higher valuation of the Omani assets. We reckon re-rating catalysts would be the approval of the Brage field acquisition and successful development/drilling of the Norwegian assets.

We have 481 guests and no members online