1. For investors that are new to Rex International, could you elaborate what the company does?

• Rex International is an international oil exploration and production (E&P) company with licences in Oman and Norway. We are differentiated with our proprietary Rex Virtual Drilling technology, which helps to de-risk exploration assets through the analysis of seismic data to determine the presence of hydrocarbons.

• Since our listing in July 2013, the Group has achieved four discoveries – one in Oman and three in Norway. In February 2020, the Group achieved first oil production from its Yumna Field in Oman and has become a full-fledged oil E&P company.

2. Describe Rex’s operations and its assets in the offshore oil E&P industry. 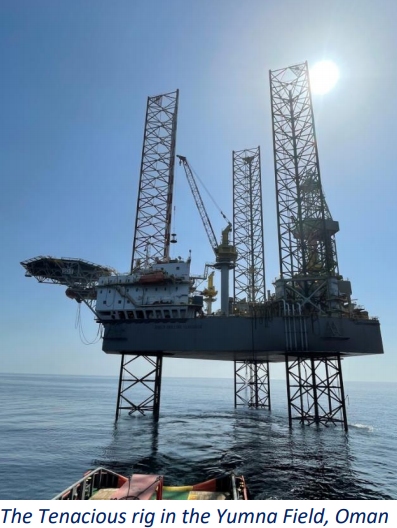 • In Oman, we achieved first oil in the Yumna 1 and obtained Declaration of Commerciality in July 2020. The Yumna 1 produced 2.12 MMstb (MMstb = million stock tank barrels) of oil in 2020 which were sold. Since then, we have drilled two more wells (Yumna 2 and 3) and upgraded the liquid capacity of our production facilities to cater to the increased production from the three Yumna wells.

• A summary qualified person’s report (QPR) issued on 5 March 2021 placed the Yumna Field reserves at 8.6 MMstb, with 2.12 MMstb produced in 2020. A QPR by Aker Geo and Pareto Asia dated 28 February 2012, had estimated the arithmetic sum of best estimate gross unrisked prospective resources in the entire Block 50 Oman to be over 4 billion barrels.

• In Norway, our subsidiary Lime Petroleum AS (LPA) is a pre-qualified company that benefits from the Norwegian tax system with 78% cash-back of all exploration expenditures, allowing it to participate in the mature Norwegian Continental Shelf alongside best-in-class international oil companies. LPA has since participated in three discoveries. Today, LPA holds interests in 13 licences in its portfolio, including three discovery assets en route to development.

3. Rex’s subsidiary, Marisah Oil Ltd, has completed the upgrade to the Yumna Field process facilities, increasing its production capacity. What does this translate into in terms of revenue?

• The upgrade to the Yumna Field process facilities was completed early in mid-March 2021, more than doubling the liquid handling capacity of our Mobile Offshore Production Unit (MOPU) to 30,000 barrels per day (bpd).

While the three Yumna wells were tested steadily over a week at rates of 20,000 bpd, we will regularly optimise production rates in accordance with the reservoir management plan, aimed at maximising recovery from the field.

4. Do you have an investment and divestment strategy? If so, could you elaborate.

• Our business model is to use our proprietary technology Rex Virtual Drilling to de-risk a prospect, participate in exploration drilling, find oil, sell oil-in-the-ground (mature assets) at a profit and recycle capital.

• In 2019, the Group brought to fruition this business model, through its first discovery asset divestment of its interests in the Rolvsnes discovery and related assets in Norway, for US$45 million. Shortly after, our subsidiary LPA farmed into two Norwegian licences and participated in exploration drilling in one of these licences, which yielded the Shrek oil and gas discovery.

• Besides divestment of assets and recycling capital, the Group also believes in building a production portfolio for recurring revenue and has since increased production volume with more wells and upgraded facilities in the Yumna Field in Block 50 Oman.

5. Has the COVID-19 pandemic affected the business and how did you deal with it?

• The COVID-19 pandemic stymied global travel and affected oil demand, resulting in the collapse of Brent oil prices in April 2020, reaching a low at US$9 a barrel (it was US$65-70 a barrel in January 2020). It was only in June 2020 that Brent crude oil spot prices had recovered to an average of US$40 a barrel.

Against this tumultuous backdrop, the Group stayed focused on its business strategy and completed the Yumna 1 well in Oman in mid-February 2020, from which 2.12 million barrels of oil were produced and sold in 2020.

• LPA also continued to farm-in to licences and participated in the exploration drilling of the Apollonia prospect in the licences PL263D/E, which resulted in a gas discovery with estimated recoverable reserves of between three and 10 million barrels of oil equivalent.

• Taking production cost of US$80,000 per day, higher production levels from the three Yumna wells in 2021 (vs. one producing well in 2020) translate into lower costs per barrel. We also view sustained Brent oil prices at around US$60 a barrel, from a low of US$9 a barrel in April 2020, as beneficial to our sales revenue.

6. Rex announced the extension of drill-or-drop decision deadlines for three licences in Norway, how does this translate into growth?

• Our subsidiary LPA holds 30% interests in PL818 and PL818B Orkja in the North Sea and PL838B Shaw in the Norwegian Sea, for which the drill-or-drop decision deadlines have been extended for one year to the first quarter of 2022.

• Drill-or-drop decisions are the first and most consequential of several decision points during the initial period for a licence. By this date, partners in the licence would need to commit to drilling a well or may decide to drop a licence. A drill decision for these licences would mean LPA’s participation in at least two exploration drillings in 2022. This is in line with its plan to participate in two to four wells during 2021 to 2022.

• In 2021, LPA is already committed to participate (15% interest) in the exploration drilling of the PL937/B Fat Canyon prospect in the second half of 2021. The company is also actively looking for farm-in opportunities with near-term exploration drilling.

7. What are some drivers for the Group and the oil industry? What is your outlook on oil?

• The persistence of the COVID-19 pandemic continues to affect global economies and oil demand, and as a result, oil prices. Major oil companies have in recent years, been under pressure to pivot away from fossil fuel to renewables. However, the Group is confident that oil will remain in demand for some time, as there is still a lack of substitutes to power various transportation modes.

Furthermore, the supply of oil is expected to be curtailed by the sharp cut in exploration investmentsin the short term.

8. How can Rex transform itself or keep up in the sustainable energy space, especially in this industry?

• We recognise the global trend towards clean and sustainable energy. In 2019, Rex obtained shareholders’ approval to diversify its business into sustainable energy, sustainable solutions for materials and development in various industries, and ownership or acquisition of related technology. The Group is actively looking at such alternative investment opportunities.

• Rex is committed to participating in oil E&P projects that minimise the impact on the surrounding natural environment, particularly in environmentally sensitive areas or areas with elevated operational risks, such as deep water or high-pressure areas. Drilling operations in Norway and Oman adhere to strict health, safety, security and environment rules.

• Rex’s proprietary liquid hydrocarbon indicator, the Rex Virtual Drilling technology, empowers the Group to have a higher chance of success in finding oil, and in turn, minimises the use of resources and the adverse impact on the environment as fewer dry wells will be drilled. Rex Virtual Drilling is a multi-attribute analytical tool which studies dispersion events in seismic data.

9. Why do you think investors should take a closer look at Rex and its business?

• Rex’s share price, like many other oil and gas related companies, has been impacted since the onset of the oil price rout in 2014, and sometimes trades below its cash level. Management has articulated its opinion that Rex has been undervalued by investors, given that the Group had weathered years of low oil prices through prudent cash management, no long-term debt and disciplined focus on its business activities.

• Rex was listed in July 2013 with a portfolio consisting of only exploration assets. The Group now has reserves in Oman that will contribute to recurring revenue and contingent resources in three discovery assets in Norway, with further potential in several exploration licences. Further exploration activities are being planned for the 17,000 sq km Block 50 Oman and the 13 licences in Norway in which LPA has interests.

• As at 31 December 2020, the Group has liquid assets comprising cash, cash equivalents and quoted investments of US$46.30 million and has zero long-term debt.

Designed to be a short read, 10 in 10 provides insights into SGX-listed companies through a series of 10 Q&As with management. Through these Q&As, management will discuss current business objectives, key revenue drivers as well as the industry landscape. Expect to find wide-ranging topics that go beyond usual company financials. This report contains factual commentary from the company’s management and is based on publicly announced information from the company.

We have 328 guests and no members online