AEM, which owns the IP for its testing platform, has become the sole source -- a status that is practically unheard of in global manufacturing -- of such equipment for Intel.

The supplier-client relationship is now into its 19th year.

The latest jump in AEM's orderbook raises prospects for higher profits on expanded profit margins because, as 1Q2020 showed, AEM's cost base does not expand much and it has new sources of lower-priced parts in Malaysia.

If AEM clinches further orders for delivery this year, and if its 1Q20 net margin of 25% can be approximated for the whole year, then its net profit would be in excess of S$100 million (FY19: $52.8 million).

And notably, AEM has just maintained that its capex for 2020 will be unchanged at $4 million (FY19: $3.2 million). That implies that the 2020 free cash flow will be sizeable. 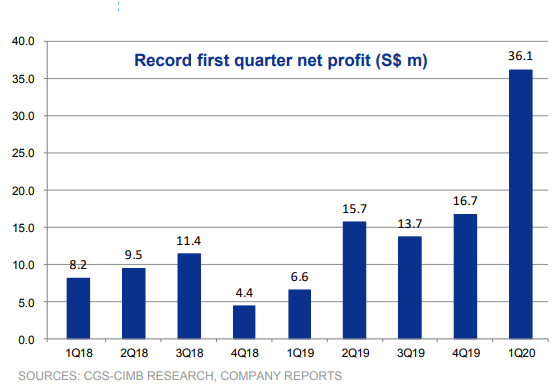 We have 4816 guests and no members online