CHINA SUNSINE: How it has risen to the top -- and what's ahead

Portuser, who contributed this article to NextInsight, traces developments/events that have led to China Sunsine's present happy state of affairs. He also shows the correlation between product ASP and raw material (aniline) price, and explains that for a given sales volume and supply-demand scenario, Sunsine's profit will be stable over time.

Rubber, which is soft and malleable, is hardened by treatment with ordinary sulphur or IS, with RA as catalysts to hasten the reaction.

Anti-oxidants (AO) slow the degrading of rubber caused by prolonged exposure to the elements.

As these essential additives (IS, RA and AO) make up only 3% of tyre manufacturing cost, they are priced on a cost-plus basis by China Sunsine.

Demand for these rubber chemicals is rising as more replacement tyres are produced for the growing global vehicle fleet.

Motorists’ preference for large tyres also lifts demand for rubber chemicals. According to Goodyear, 19.5% of tyres will be large ones by 2020, up from 6.8% in 2010:

Moreover, high-grade products such as IS and rubber accelerator TBBS are used in the manufacture of radial tyres.

By 2021 every tonne of tyre rubber will consume 14kg of IS, up from 12.7kg in 2016, as the pace of radial tyre adoption quickens, according to IS producer Oriental Carbon & Chemicals in a 3QFY19 presentation.

The top six tyremakers accounted for 51% of global tyre sales in 2017, according to an article on sohu.com. 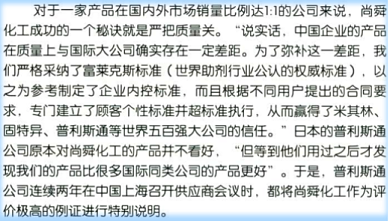 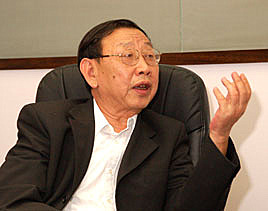 Since 2014, Sunsine has been serving two-thirds of the world's 75 biggest tyremakers. Bridgestone, the world's biggest, accepted Sunsine's RA in 2003 and described Sunsine as an exemplary supplier.

In the early 2010s, Flexsys gave up RA to focus on its highly lucrative IS business. This allowed Sunsine to grow to become the top RA producer.  (Source: Click here)

IPO and growth from then on

In 2007 Sunsine launched an IPO to raise funds to expand its RA business and to produce IS and AO.  Eleven years on, Sunsine had grown many-fold without additional equity funding:

Through the years, sales volume grew, and capacity utilisation was high. In 2019, exports accounted for 33% by volume and 39% by revenue. Though these were its new products, Sunsine was able to sell IS and AO to existing customers, leveraging on its quality RA. 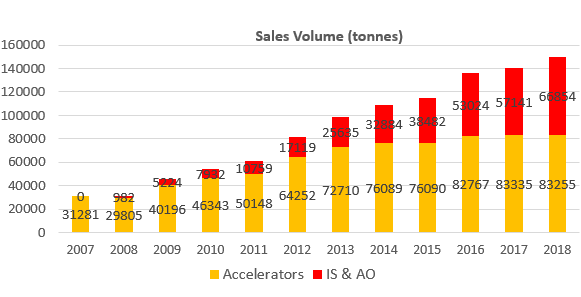 Capacity expansion took place in stages and was funded substantially by cash flows. By 2016, Sunsine had repaid all its loans, and was flush with cash: It had RMB 1,039m (42 cents per share) as at end-2018.

Despite large capital spending and working capital for expansions, Sunsine has been paying dividends every year since listing, and at a rising rate:

In total, Sunsine has declared RMB 468m of dividends (including the RMB 135m proposed for FY18), which is higher than the RMB 264m IPO net proceeds.

IPO investors, who paid 39 cents for a Sunsine share, will receive a total of 20 cents in dividends including the proposed 5.5-cent.

Sunsine is now the world’s largest RA producer with 20% of market share. It is also China’s biggest producer of IS.

Sunsine's annual profits were around RMB 100m and below before 2014 when many rubber chemical factories skipped waste treatment, leading to oversupply that depressed selling prices.

Sunsine’s annual profit rose to around RMB 200m between 2014 and 2016 when local governments closed some errant rubber chemical factories. Its profit surged thereafter as enhanced inspections led by the central government brought about more factory closures. 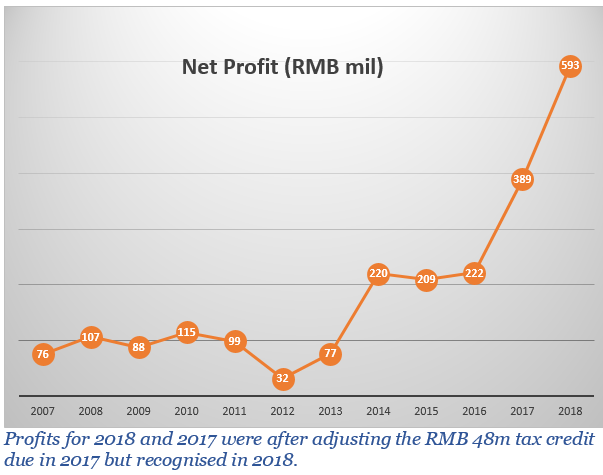 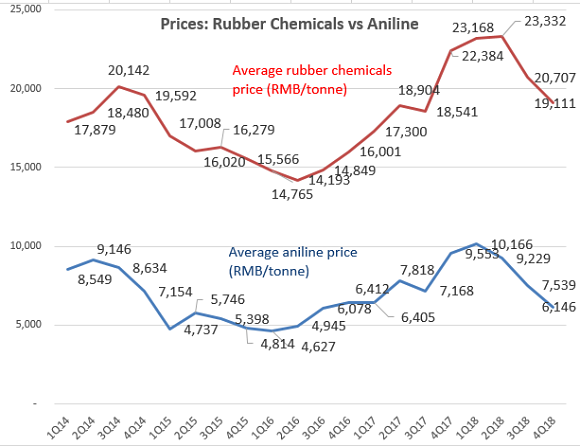 (Aniline is chosen as the proxy because it is the main raw material in rubber chemical production.)

For a given sales volume, the profit correlates with ASP.

Profit trends up as sales volume grows. For example, the 5% sales volume rise in 2016 offset the 7% decline in ASP, leading to a higher profit. 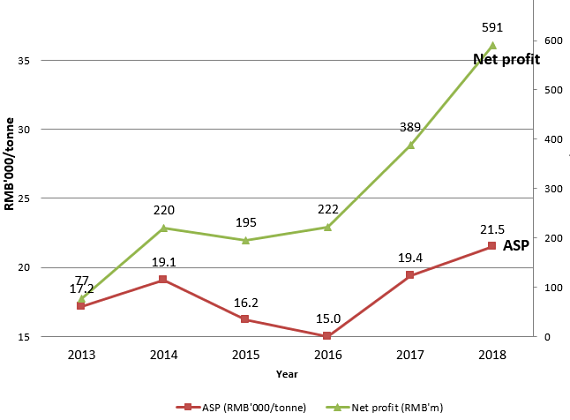 2018 profit was exceptional -- 52% above 2017’s on steep ASP (RMB 23,365) in the first half due to pricey aniline and tight supply following stringent inspections led by the central government.

The 2019 profit is expected to be much lower than 2018’s as a sales volume increase is unlikely to offset enough an expected substantial ASP decline.

As aniline price alternates between “high” and “low”, weak profit due to low aniline price is not a matter of concern. A rebound in aniline price, which is only a matter of time, will lift product prices and profit.  Over time, profit will be stable for a given supply-demand scenario and a given sales volume.

Sunsine will acquire an 800-mu (an area equivalent to 75 football fields) site, near the 609-mu HQ, that houses factories for 116,000 tonnes of rubber chemicals and 40,000 tonnes of feedstock, to grow market share and raise economies of scale.

The estimated project cost is RMB 2.5b including RMB 1b for working capital. If spread over five years, the average yearly outlay is RMB 500m, which can be paid for by projected profit (in excess of RMB 400m) and RMB 100m depreciation:

Sunsine will still be flush with cash if the broking firms’ profit projections come true.

Competition & consolidation
RA are Sunsine’s mainstay, accounting for 70% of 2018 revenue.

Casualties are high in the RA industry. Two erstwhile main rivals, named in the IPO prospectus, are no longer around. Another producer, which grew to become a sizeable entity, was ultimately shut down for causing severe pollution.

Sunsine’s current main rivals are planning to expand their capacities.

Tianjin Kemai failed twice, however, to raise RMB 890m from the Shanghai bourse. Yanggu Huatai needed RMB1,200m to relocate an old base and expand, but had only half the amount from a rights issue. It has recently aborted its planned TBBS expansion. (Source: Click here)

Relocation entails cost of setting up a new plant and higher running costs at industrial parks, as well as producing buffer stock in advance to maintain supply to customers.

Moreover, approvals from multiple agencies for the new plant to start operation are uncertain. Small or cash-starved producers may opt to give up altogether.

The rubber chemical industry may not interest big enterprises as it is small (US$ 3.5b sales in 2017) and already has dominant players. (Source: Click here)

Existing big producers will therefore be the ones to gain from industry consolidation. Sunsine’s global RA market share of 20% in 2018 (7% in 2008) is set to grow with the new 30,000-tonne TBBS capacity and more expansion.

For its track record in R&D, Sunsine was granted the high-tech status conferring on it the 15% preferential tax rate in 2017.

Through R&D, Sunsine has widened its product range.

Continual quality improvement of IS, which was introduced in 2008, has led to strong sales volume growth. Sunsine aspires to become a leading player in the IS space.

The production knowhow of 4ADPA, a feedstock for high-grade 6PPD, is known by few players. Through R&D, Sunsine had a breakthrough and is now a notable 6PPD producer.

An automated process producing TBBS of more consistent quality than the manual method will add 30,000 tonnes to the existing 20,000-tonne capacity.  The management is confident of demand as supply is limited owing to the production knowhow being confined to a handful of players.

Sunsine is stepping up R&D in collaboration with renowned institutions such as Tsinghua University to gain a competitive edge over its peers.

Chinese tyremakers have been moving some production overseas to dodge import restrictions on China-made tyres. Those operating in Thailand helped the country to export US$2.23b worth of tyres to the US in 2018, slightly below China's US$2.37b. (Source: Click here).

We have 787 guests and no members online