FY18 net profit up a mere 1.6% yoy on higher operating costs
4Q18 net profit was flat at RM33m, which brings total FY18 net profit to RM130m, below expectations at 93%/96% of our/consensus’ full-year forecasts. 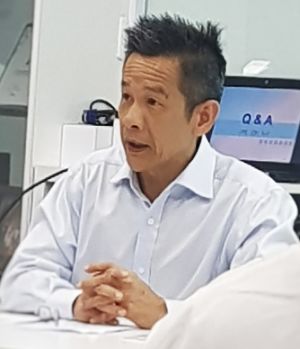 Wong Teek Son, executive chairman of Riverstone Holdings, at the FY18 results briefing. NextInsight photo. Revenue gained 22% yoy to RM257m for the quarter on the back of an expanded annual glove capacity, now 9bn as at end-2018.

No surprises in dividends with a final DPS of 5.7 sen declared, which brings total FY18 DPS to 7.0 sen (representing a 40% payout).

Higher operating costs weighed down on margins
Operating costs were higher than expected amid a 10% yoy increase in labour costs (c.15% of total costs) in the lead-up to the minimum wage increase effective Jan 2019 in Malaysia.

New glove products may also be rolled out in RSTON’s offerings that could include specialty healthcare gloves and gloves that will allow easy double gloving in anticipation of heightened demand in the lead up to the USP 800 standard that will come into effect in Dec 19 in the U.S.

More robust growth from healthcare compared to cleanroom
The split between healthcare and cleanroom gloves in its FY18 volume output was 83:17, indicating its healthcare gloves enjoyed robust volume growth of well over 20%.

Cleanroom gloves, on the other hand, saw slower sales volume growth in the single-digit range amid a shrinking hard-disk drive market and declining smartphone sales shipment.

We have 576 guests and no members online