All this intrinsic value of REX may yet find more love in the stock market in the light of a rebalancing of supply and demand in the oil market. The price of oil has recovered to around US$75 a barrel. 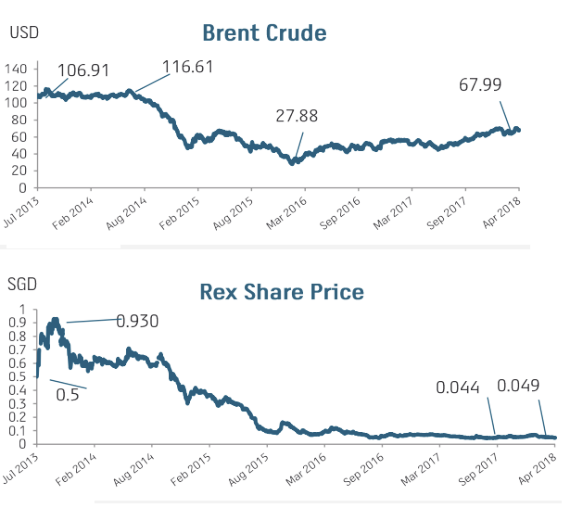 Source: REX presentation
In Oman
There, REX is working to start oil production in 1H2019. REX holds a 92.65% stake in Masirah Oil Ltd, the operator and 100% owner of Block 50, located offshore of Oman’s east coast.

Under an agreement with the Oman government, half of the concession oil revenue will go to cover historical operating and capital expenditures, which currently total about US$100 million.

The other half of the oil revenue will be split 70:30 with the government and REX, respectively.

If it's successful in starting production, REX intends to recycle some of the strong cashflow into drilling new wells in Oman Block 50, which covers 17,000 sq km.

REX has a credit facility in Norway which is 100% backed by tax refund receivables from the Norwegian government for 78% of its exploration costs.

It's interesting that REX subsidiary Lime Petroleum AS is, in the first place, eligible for the 78% refund.

"Not that many companies of our size are pre-qualified in Norway and I think it is right to say that our technology played a very important part in us getting that pre-qualification," said Mr Dan Broström, executive chairman of REX.

At the Rolvsnes discovery, drilling is ongoing for an approximately 2,000m horizontal test production well, including a Drill Stem Test.

Upon achieving success, the well will be tied back 4km to the Edvard Grieg platform for an Extended Well Test, giving first oil in late 2020.

As CEO Mans Lidgren recounted: "We have used our technology-led, de-risked exploration approach to build a cluster of investments in the Rolvsnes area in the North Sea. They are close to existing pipeline infrastructure, so that upon more discoveries, commercialisation can be fast-tracked."

We have 1164 guests and no members online