Republished from ThumbTackInvestor with permission. The investor's portfolio is valued at close to S$1 million.


I spent the past couple of days dissecting LTC Corporation’s recently released Annual Report 2016. This post is about what additional information I have gleaned. Since this is an update, I won’t be spending any time on the basic characteristics of the company. I reckon unvested readers who have not previously looked at the company, will probably find this irrelevant and very dry. Anyhow, here goes.

To put some context in place, here are related earlier posts about LTC:

Details of this are found in page 65 of the AR:

BTW, the company has a June year end.

This means that the project is fully sold, and we should be seeing the effects of this in the upcoming FY17Q1 results to be released probably in a couple of weeks.

In my earlier report, I surmised that LTC has been using its FCF generated to pay off debt and that starting from FY17, the FCF will truly… be free. It’d be interesting to see how the management utilizes it.

The CF from this ($3.6mil x 4) is, thus, a nice start and reaffirms the points I made in the earlier report.

Again, in an earlier post, I’ve explained why I was disappointed with the… I believed I used the word “asinine” deal.

USP is the holding company for a 90% stake in the SOGO departmental stores in Malaysia. As I’ve explained, with corresponding figures, it seems the management overpaid for the acquisition.

On top of that, it hardly seems wise to use CF from a very tough steel industry now, to jump both feet into another, probably even tougher industry. (Retail)

The figures basically confirm my fears. Under “Share of results of a joint venture” in the income statement, USP contributed $506k.

To be fair, USP has contributed only 3 quarters of earnings, and it’s hard to gauge how it’d perform without longer term data.

Still, the ROE figures are not great. Let me be generous and assume that in FY17, USP contributes 2x what it did for 9M16. That’s about $1.01mil.

This means that USP generates an annualised ROE of 4.2%

Hardly something to be proud of eh.

Well, LTC’s ROE figures were equally as shabby: 3.52% in FY14, 4.04% in FY15 and 2.75% in FY16. But if you’re going to spend $$$ to acquire unrelated assets to “expand” or “diversify revenue stream”, common reasons managements give to justify going into uncharted territory, I’d think the 1st thing you want to do is to make sure it pulls up your overall ROE figures. Which is why I said it’s asinine.

3. Account for goodwill when determining valuation based on BS

To add on to why the USP acquisition was dumb, the company paid up massively more than the book value of the acquisition.

That’s jargon for “additional money paid above the market price of the assets of the company”.

Anyway, my take home message here is that when determining intrinsic value, I would write off the goodwill portion completely.

To summarize, basically LTC has to implement FRS109 by 1 Jan 2018. FRS109 basically states that you’d have to mark to market price, any unquoted equity investments that the company has.

The company doesn’t release any info about what these “unquoted equity investments” actually are, so there’s no way to evaluate if the current market value is more or less than the historical cost.

In any case, it’s not that important as there’s only $3.69mil of these unquoted equity investments carried under long term investments. Don’t think it’ll make much of an impact.

5. Associate company, Kairong developments, has paid off a chunk of the shareholder loans

This is certainly a good thing. Always nice to see shareholder loans to associates being repaid. From my previous experience with King Wan, this is a metric that’s very important to track.

If $$$ starts getting repaid, everything is great. If not, start worrying and digging deeper. 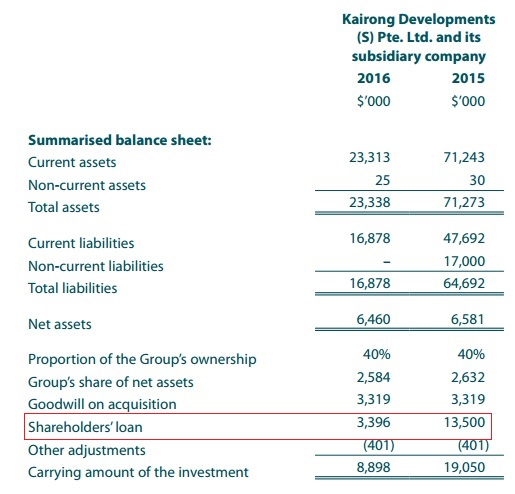 As highlighted, I noted the drop in shareholders loan by just over $10mil.

To kinda sidetrack a bit, I love tracking these figures in various statements. If it all adds up, it’s very satisfying. Like putting in the final pieces of a puzzle.

Collectively, the numbers tell a story. 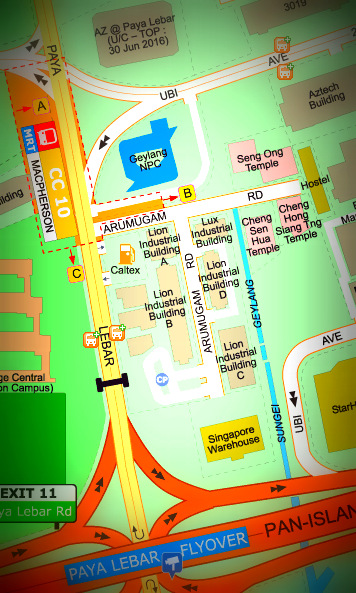 Self explanatory. The value (as determined by Knight Frank), has remained constant at $118mil. The rent has decreased very slightly in FY16.

While all these have held up thus far, it is hard to say how they’d perform in FY17. My best guess is that we’d again see fairly constant valuations and rent in FY17, without much change y-o-y.

7. Fx is favorable for the company thus far

LTC is exposed to currency risks. Fx though, has thus far been kind to the company.

A strengthening USD-SGD is good for the company.  Every 3% increase in USD-SGD results in an increase of PBT of $1.42mil

A strengthening MYR-SGD is bad for the company. Every 2% increase in MYR-SGD results in a decrease of PBT of $39k

Surprisingly, the ringgit doesn’t have too big an impact on the company. Only $39k for every 2% change. The USD impact is much much stronger, and thus far it’s been all good. We all know how strongly the USD has performed versus the SGD.

8. Big shareholders have increased their stake in the company in in FY16 compared to FY15 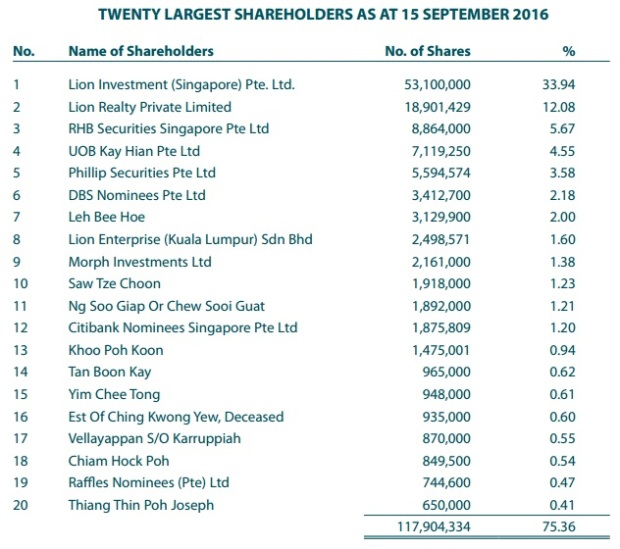 Morph Investments Ltd in particular, is interesting. They’ve increased their stake quite a lot in the past year, from just under 1.4mil shares, to 2.16mil shares as of FY16. I have zero knowledge of Morph Investments, but I did notice them in many undervalued companies that I have studied over the years.

These guys obviously practice a very strict, warren buffett inspired “cigarette butt” type of investing style, going for deeply undervalued companies, with ultra long holding periods. I don’t think they’ve ever over paid for anything. They’re the kinda guys who go straight to the bargain bins when shopping.

Can’t be a bad thing at all to see them increasing their stake.

Finally, I stress-tested the valuations (based on the BS), just to have a sense of how ridiculously low the market is pricing the company currently.

This is the latest asset side of the BS:

Let’s start taking a chainsaw and cutting away big chunks of the assets to “Stress test” the company and incorporate a big Margin of Safety.

This means that after the above scenario where the whole market has gone to hell, the world is facing the end of humanity type of crisis, Mr Market is still willing to give you 63.48 cents worth of value if you give him 52 cents or so.

I don't think it will be privatized, although if I am part of the Chengs, I personally would. It's a no brainer
LTC though, has always traded on a severe discount to NAV, I don't see why they'd suddenly want to privatize it.
On top of that, the nature of the steel business makes it hard to privatize. This is because practically all similar companies (I've explained why this is so in a blog post about AEH) trade at a large discount, and delisting offers by virtue of its public nature, is very hard to b very low. So for eg. if the controlling shareholders offer a price at book value, they'd think they're over paying already, whereas the markets will think it's grossly underpaying. I haven't heard of a delisting offer that's so far below book value. So in short, it'd be hard to close this gap between markets expectations and the buyout party's expectations.
Congrats on the presidency btw.

Quote
0 #1 Donald 2016-11-08 19:32
Many thanks for your very detailed yet easy-to-follow presentation on LTC which is impressive. Do you think there are any reason for the owner to privatise LTC since they share price is underperforming so significantly. They did attempt to privatise another co, Lion Asiapac many years ago but with no success.
Quote
Refresh comments list
NextInsight.net

We have 585 guests and one member online