Increasingly, Singapore companies have more reasons to be vigilant about the international businesses and individuals they deal with. The companies risk running afoul of anti-corruption and anti-money laundering laws of the US and other countries, which are being applied vigorously against those who have dealings -- even unknowingly - with criminals.

"These are very important considerations in global markets because Europe, the US and other countries are committed to rooting money laundering, terrorism financing, and corruption," says Robson Lee, a partner at Gibson, Dunn & Crutcher LLP.

The US exerts its powers through its Office of Foreign Assets Control (OFAC) which has seen significant growth in its sanctions. 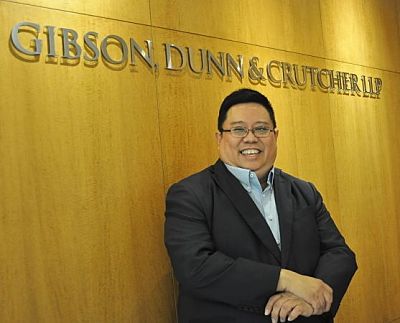 Robson Lee is a partner at Gibson, Dunn & Crutcher LLP, which has 1,200 lawyers in 19 offices in the US, Europe, South America, the Middle East and Asia. NextInsight photo

"Over the years, it has gone after countries such as North Korea and Myanmar, some of whose citizens have become Specially Designated Nationals (SDN). So the growth of sanctions has become part of the risks that corporations have to manage and mitigate when doing business," says Mr Lee, in a recent interview with NextInsight.

"Countries which are sanctioned and individuals who are on the sanctions list have set up entities all over the world. Singapore is home to 41 entities currently sanctioned by OFAC. And that is something that is unknown to many people."The UK has its version of OFAC in the OFSI (Office of Financial Sanctions Implementation).

Then there is the Paris-based FATF (Financial Action Task Force) which made headlines in Singapore recently, when it said that Singapore can do more to combat money laundering and financing of terrorism on trans-national basis.

Following that, the government announced that there would be amendments to the Companies Act and the Limited Liability Partnership (LLP) Act to enable regulators and enforcement agencies to enquire, and owners of companies and LLPs must disclose, the beneficial owners behind companies set up in Singapore.

China will in, due course, have its own rules for international businesses that want to engage with any Chinese entity. As a further example of countries getting tough, Indonesia is cracking down on evasion of income tax. It has granted an amnesty which will expire in March next year.

Dealing with, for example, a US-sanctioned party can result in huge consequences for a business.

"Your assets can be frozen. Access to the US market, retail investments, insurance, re-insurance, stocks, bonds, banking, everything is prohibited. That has happened in 1MDB’s case. If you look at Jho Low, his huge mansions and real estate have all been frozen.  And it’s not just hard assets -- your liquid assets and other assets such as cash, investments, stocks…anything that you invest in NASDAQ or New York Stock Exchange, any bonds or any insurance policies that you have bought -- can be frozen," says Mr Lee.

"The next thing that can happen to you is penalties. The authorities can fine you billions of dollars and require you to divest stakes in companies, or require US companies, anybody who invests in you, to divest their stakes immediately. And they will suspend all your licenses for doing business in the US."

You wouldn't even be able to enjoy the freedom of movement as you could be extradited to the US for investigations.

"If you remember, certain Singapore entities or persons who have dealt with countries that were under sanctions…Singapore has cooperated with all the extradition requests. And in the case of one guy who Singapore had not extradited to US, he went over to Batam, he was caught, and he was flown on the next plane to the US."

The fallout from being blacklisted or extradited or simply being investigated is what Mr Lee calls "de-risking" action by people around you.

"De-risking is a form of self-protection every entity takes on its own. And I’ve seen a client from another country, he goes around to all the law firms. No law firm wants to deal with him. So de-risking is so overwhelming and scary that even if you are a huge conglomerate, tomorrow you can be reduced to rubble."

We have 567 guests and no members online