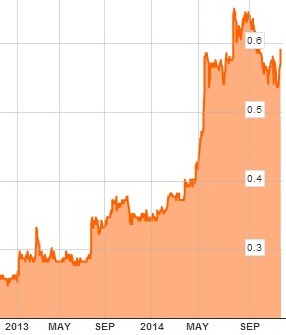 Chart: Bloomberg.• Upgrade to BUY but with a lower target price of S$0.655, as we update the net cash position of Lantrovision, factoring in the S$0.03/share dividend (declared last year) that will be paid out in November.
• We see value emerging as the share price has declined by 14% since our downgrade to our suggested entry level at S$0.55 (after adjusting for the recent S$0.03 dividend payout).
FINANCIAL RESULTS
• 1QFY15 revenue grew 6% yoy due to more installation projects in Singapore and China, and trading sales in India. As a result of the higher sales, profit before tax grew 9% yoy to S$4.1m forming 27% of our full-year forecast. However, due to downward adjustments made to deferred tax assets (resulting in a higher effective tax rate), net profit to owners declined 2% yoy to S$2.7m.
• As at 30 Sep14, Lantrovision remained in a strong net cash position of S$80m (or S$0.296/share). After adjusting for the dividend that will be paid out later in November, Lantrovision will continue to maintain a strong net cash position of about S$72m (representing about 47% of its current market cap).
OUR VIEW
• Beneficiary of the regional data center boom. According to a new report by power management company Eaton, data centre budgets in Singapore and Asia Pacific will increase 5-10% in the next 12 months. With almost all of its revenue derived from Asia Pacific, we believe Lantrovision will be a key beneficiary of the increased IT infrastructure spending in the region

• Risk and reward balance has become attractive again. Lantrovision is currently trading at 13.1x FY15F PE. Excluding its hefty net cash position, Lantrovision is trading at an undemanding valuation of ex-cash FY15F PE of 6.9x, with an attractive
yield of 3.8% (based on a FY15F DPS of S$0.021; 50% payout).

Coupled with a blue chip clientele base that includes major banks and MNCs like Microsoft and American Express, we believe Lantrovision offers good value at its current levels. Our target price of S$0.655 has an implied FY15F PE of 15.3x and an implied ex-cash FY15F PE of 9.1x. 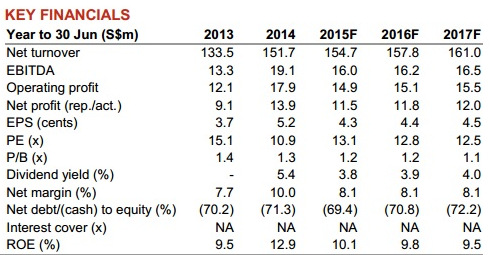 We have 688 guests and no members online