CIMB says Sunvic Chemical is worth S$1.35 on buyout of its production facility by French company

In a rare blockbuster deal in the chemical industry, the world’s leading chemical producer, Arkema, is set to acquire a portion of Sunvic’s (SVC) production capacity for Rmb3.9bn. Disposal gains (Rmb1.9bn) alone are about 120% of SVC’s current market cap.
SVC’s earnings and stock price have been on the mend in the past year, reflecting the industry’s overall turnaround.

The latest transaction could lead to special dividends to reward shareholders, though we see more than this in the stock.
No more debt burden. We believe that this transaction will effectively wipe out SVC’s debt, as Arkema will take over SVC’s largest geared-up facilities (Rmb2.2bn debt, 480k tonnes/year). 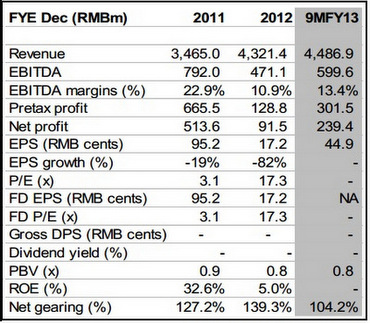 SCV will also be able to save c.Rmb120m/year in interest costs.
Privatise to rebuild? SVC’s remaining facilities (205k tonnes/year) are almost fully depreciated and should continue to contribute. Given no immediate capex needs, it is at a crossroads. We understand that there is no non-competing clause in place, meaning it can rebuild capacity cheaply using its new-found wealth and some leverage.
A cheaper option is to start the rebuilding when volatile AA and AE prices come down in the distant future. We reckon that SVC’s founder/major shareholder, Mr Sun, might even seize full control of the listed company and start the rebuilding process under the radar.
Re-listing the company on other bourses in the future might be a better idea, given higher valuation multiples.
Stock worth S$1.35. We see the current market mispricing as its biggest investment merit. Post-transaction, SVC’s NTA is estimated at S$1.50.

In seasonally stronger years, the market used to price SVC at above 0.9x P/NTA (1 s.d. above its mean since listing), such as in FY10-11 when SVC had smaller capacity and record earnings due to favourable commodity prices. Its current valuation of 0.4x FY14 P/NTA is its lowest since listing.
When the strongest financial impact kicks in nine months later (net-cash and asset-light), we believe its stock has the potential to hit S$1.35/share (0.9x FY14 P/NTA).

While Sunvic has agreed to sell its plant in Taixing, it will keep its other plant which is located in Yancheng, Jiangsu Province (above). The latter plant has an annual Acrylic Acid (AA) and Acrylate Esters (AE) production capacity of 205,000 and 250,000 tonnes, respectively.
Photo: Company

Nam Cheong fired its first salvo of the year with the sale of four emergency response and rescue vessels (ERRVs) and one 6,600 bhp anchor handler worth US$70m in total.

We maintain our Add rating, with a higher target price, still at 8x CY15 P/E (peers’ average). Nam Cheong has recorded two consecutive record years of vessel sales and we believe that another record year should propel its share price to our target price.

We have 1761 guests and no members online