FARMING FOLLY: How One PRC Investor Lost 90% On Agriculture Picks

A CHINESE WOMAN lost nearly all of her investment in just one month betting on spot agricultural commodities.

In China’s agricultural heartland of Hubei Province in the city of Wuhan, Ms. Liu managed to lose around 90% of her original 260,000 yuan capital while trying to make a few bucks on the commodities exchange.

And around 100 people in the investing group on chat forum QQ that she frequents also claim to have suffered “major losses” playing the exchange.

So how did Ms. Liu’s catastrophic crop failure come about? 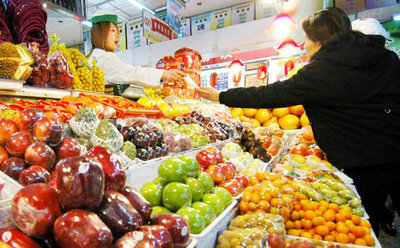 Spot trading activity often influences how much we pay at the local produce stand.     Photo: fjcoopShe was lured early on by small initial gains which ended up draining her life savings in the blink of an eye.

With the A-share market struggling to gain any positive traction for most of the year, it’s understandable how investors might be looking for a quick alternative to boost their returns.

So with relatively new and non-traditional trading platforms like the spot agricultural commodities exchange, it’s inevitable that some might get drawn in fast and deep without first conducting research or consultation.

In fact it appears that sales and trading agents for the various electronic agricultural trading venues are specifically targeting traditional shareholders who are tired of watching their money gather moss or deteriorate in a sluggish bourse.

A sales agent for a Hunan Province-based electronic agri-exchange surnamed Wang said he contacted the above-mentioned Ms. Liu in May and used the following sales pitch to lure her into the system.

“Spot agricultural trade is a snap, and you can make money regardless of whether commodity prices rise or fall.

“Even if you lose a bit of your investment, you always have the option of cashing in for tangible assets... and I’ll help guide you through the whole process,” Mr. Wang said to Ms. Liu.

With ample company resources at his avail, Mr. Wang went so far as to apply for a trading ID card for Ms. Liu, even gifting her with 5,000 yuan startup capital to allow her to “try her hand” at agricultural spot trading.

At first, Ms. Liu treaded gingerly, dabbing in tea leaves – a first choice which rewarded her with an over 5% daily return.

But the trap was expertly laid by Mr. Wang and Ms. Liu continued to take the bait, investing some 80,000 yuan after just a week of “trying her hand” at spot trading.


After building up a mutual trust of sorts and allowing Ms. Liu to get her feet wet and make a handsome initial return, Mr. Wang felt his client’s guard was sufficiently lowered and he went in for the kill.

Out of the blue, he called Ms. Liu and urged her to put all her capital into the exchange on a few commodities.

As she was doing the deed, the persistent salesman called again, telling her to quickly jump back out of various investments when spot prices hit agreed upon levels.

But just after hanging up with her “financial advisor,” she found that the electronic agricultural commodities spot trading platform was suddenly unresponsive, with buy/sell command options inexplicably inoperable.

During the mystery technical glitch – which lasted 48 hours -- the price for her chosen commodities had drastically fluctuated.

But the hapless Ms. Liu was only able to sadly sit in front of her monitor watching 30,000 yuan of her hard-earned money placed in her commodity of choice disappear the first day, and then another 50,000 the second.

She also realized that her other investments in the exchange all bottomed out over the same period, and it was soon painfully evident that just 31,000 yuan of her original 260,000 investment was left to her name.

All this time, her friendly advisor Mr. Wang was unreachable.

Ms. Liu shared her tragic loss as a warning to others about the dangers of electronic spot trade in agricultural commodities – we should not blindly trust salesman for the agricultural exchange lest we end up reaping what we sow.

We have 492 guests and one member online