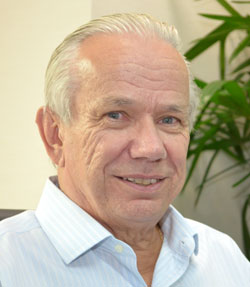 Executive Chairman Dan Brostrom: "After our IPO, many investors approached us to buy more shares in Rex International.

"As the IPO share allotment had not been fully taken up, we decided on a placement at 75.5 cents, 51% higher than our 50-cent IPO price.

"With the additional monies, we can participate in opportunities that arose after the IPO. We are now well capitalised for our upcoming drilling campaigns."
Photo by Sim Kih
“We are going for the big offshore finds and that programme starts now, with Oman,” said executive chairman Dan Brostrom during an exclusive interview with NextInsight.

Unlike the typical exploration and production (E&P) company that generates income from crude oil production, Rex International intends to sell oil in the ground and use the sale proceeds as capital to buy stakes in new concessions.

Current prices of offshore oil in the ground range from US$5 to US$15 per barrel.

The Oman prospect being drilled is about 17,000 square kilometers in size. This suggests that Rex International’s effective stake of 41.6% in the Oman concession can fetch a considerable amount.

By the time the Oman first phase test drilling ends this year, the following will be known:

1) If the oil at the Oman well is commercially recoverable.
2) The geophysical structure of the oil well.

Mr Brostrom estimates that any sale from its Oman concession can only be completed up to a year later, as time is needed for negotiations and proving of oil reserves to, and by, prospective buyers.

“We intend to have 5 to 7 offshore drilling campaigns next year,” said Mr Brostrom. This could mean a phenomenal FY2015 performance for Rex International when oil well sale proceeds roll in.

This rate of drilling campaigns is unprecedented among its E&P peers, and is possible only with Rex International’s unique business model.

Rex International, on the other hand, sidesteps much of this process.

With the exception of its first offshore concession from the Oman Sultanate, Rex now gains interest in oilfield concessions from concession holders who have already expended resources on gathering seismic data and other geophysical surveys.

“There are many oilfield concession owners who have paid double digit millions for seismic studies and still don't know where the oil is.

"Now that Rex Virtual Drilling can analyse their seismic data in four to six weeks with a high level of accuracy, they are eagerly approaching us,” said Mr Brostrom.

From exploratory drilling to identifying recoverable oil reserves, Rex Virtual Drilling has proven to be more than 50% accurate compared to the global industry average of 15% when traditional methods are used.

But Rex Virtual Drilling is not for sale. "We don't sell our technology. We will only use our technology for equity interest in concessions that we are keen on,” said Mr Brostrom.

The company's business model is the first of its kind among E&P players, and is the reason it is making good on, and may even exceed, its aggressive claims of doubling oilfield concessions from 10 to 20 within a year of listing.

"Four months after listing, we have already grown our portfolio to 15 concessions, beating our target. We have spudded Oman according to schedule. With the added proceeds from our recent placement of shares, we are well capitalised for our expansion plans and for our upcoming drilling campaigns," added Mr Brostrom. 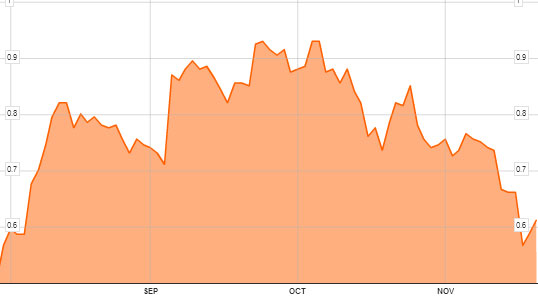 From a high of over 90 cents, Rex's share price has retreated to 65 cents. Is the drop justified, given that its projected FY2014 losses are likely to be followed by not just a couple, but several, sizable oil strikes in FY2015?  Bloomberg data

We have 945 guests and one member online