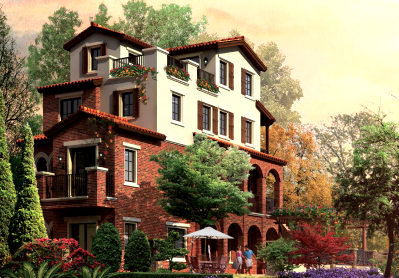 “We think the strong sales so far this year will be maintained into the fourth quarter, and that the sequential sales decline in September does not indicate falling demand.

“Instead, we think the monthly fall in September is due to a high base of comparison and fading seasonality of sales in major cities,” Goldman Sachs said.

The research house said that overall, sales volumes have shown divergent trends, with tier-1 cities still at their lows since 2008 and most others at the mid-point at best.

“We expect such stable volume outlook to drive property price to recover from the 2Q trough level, but slowly.

“We believe developers are unlikely to regain strong pricing power in the coming quarters, given: “1) underlying demand, the main driver for volume recovery, is affordability sensitive; 2) we estimate it would take another 1-2 quarters for developers to repair balance sheets to a healthy level, partly due to still-high financing costs and a longer cash collection cycle now vs. previous years; 3) new sales launches could rise further in 2H12 given construction in the pipeline is sizable, not to mention units already launched but unsold are still at a historical high.”

On the reform front, property tax presents a near-term risk, but a long-term positive.

“We think property tax is a way to normalize tightening policies in the housing sector, i.e. replace home purchase restrictions.

As such, we think it should be positive in the longer run, but we cannot rule out the possibility that there could be a certain period when both the HPR and a property tax are in place, providing downside risk to our volume expectations,” Goldman Sachs said. 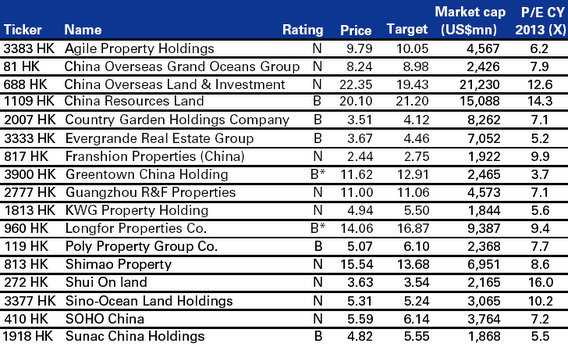 “We believe our offshore coverage universe has largely priced in a strong volume recovery.

In our view, further upside would require sustainable property price appreciation, which we think is unlikely in the near term given the low visibility around further potential easing measures by the government.” 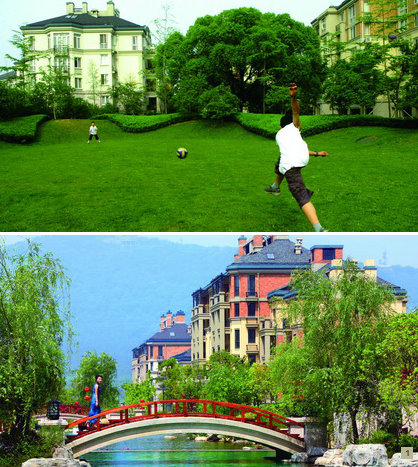 Greentown is not afraid of targeting the richest of the rich, but when property prices fall, the developer is hit particularly hard.
Photos: Greentown

“We expect Longfor to deliver stronger-than- peer contract sales growth in 2013 among our coverage universe on its opportune land banking since 2Q12, strong brand equity, and execution ability.

“With 16 new projects added YTD, we estimate the number of key projects selling in 2013E will increase by 28% to 59 from 46 in 2012E, representing the highest growth among our offshore coverage universe.

“Given ongoing uncertainty around government policies and the outlook for property prices, we think an expanded project pipeline is required to grow contract sales in 2013E and drive share price outperformance

“We expect mean reversion of Greentown’s valuation on its earnings/margin normalization after the repair of its balance sheet.

We expect Greentown to continue its strong sales performance, which should serve as a positive catalyst for the stock. We now project presales in FY12 at 15% higher than the company’s target,” Goldman Sachs said.

Greentown shares have risen around 87% since the announcement of its strategic alliance with Wharf and the research house said it believes further re-rating will be realized, driven by better-than-expected earnings.

Moody’s Investors Service says that improving sales and access to funding for China’s listed property developers have convinced the ratings agency to upgrade the sector to ‘Stable’ from ‘Negative’.

The revised outlook reflects the ratings agency’s expectations for the fundamental business conditions in the industry over the next 12 to 18 months.

“Property sales to improve despite a decline in prices.

“The stable outlook for the industry reflects our expectation that property sales will grow in the single digits – in percent terms – year-on-year over the next 12 month,” Moody’s said.

“But, owing to the focus on mass-market housing rather than luxury homes, the average selling prices will likely decline mildly year-on-year.”

“The Chinese government is unlikely to impose further regulatory restrictions to tighten the property market, as the existing restrictions on home purchases have been effective in controlling speculation and reining in property prices.

“In addition, a further cut back in investment in the sector would weigh on an already slowing Chinese economy,” Moody’s added.

Developers that focus more on mass-market products and those with well-established market positions should see their contract sales increase over the next 12 months.

“By contrast, small companies that lack strong brands to promote the sale of luxury housing units or have less flexibility in transforming their business models to focus on the mass market will continue to face downward pressure on their sales.”

SING HOLDINGS: Stock Price Is No Reason For Shareholders To SingHOUSE MONEY: Top 500 PRC Developers Assets Up 50% To 5 Trillion Yuan 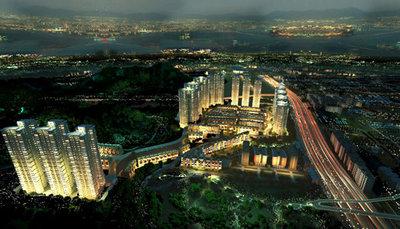 The China property sector has rallied 56% YTD and has outperformed the MSCI China by 51%.

“After rolling over of PT timeframes and revising our PTs based on FY13E EPS, we suggest the sector is subject to 1% share price downside, and expect laggards to continue the valuation catch-up.

Earnings growth beyond FY13 is visible but placement risk exists.

“We believe big caps have fairly priced in the positive growth outlook and even margin expansion opportunities, while mid/small-caps have better share price upside potential.

“Among the mid/small-caps, we expect Agile to outperform in the near term as sales could improve significantly in the last two months with new project launches finally. We also believe KWG and Evergrande also offer greater upside potential given current low valuations.” 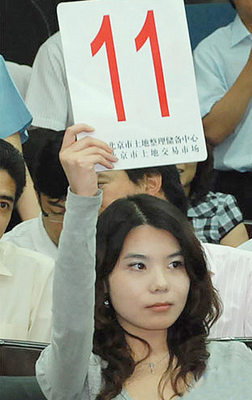 “In the land market, 87 residential sites were sold over the past week with an average transacted premium to opening prices of 13%.

Sixty of the 100 cities’ housing prices increased MoM in Nov (vs 56 cities in Oct).

In the land market over the past week, 87 residential sites were sold with an average transacted premium to opening prices of 13%.

We have 2109 guests and no members online